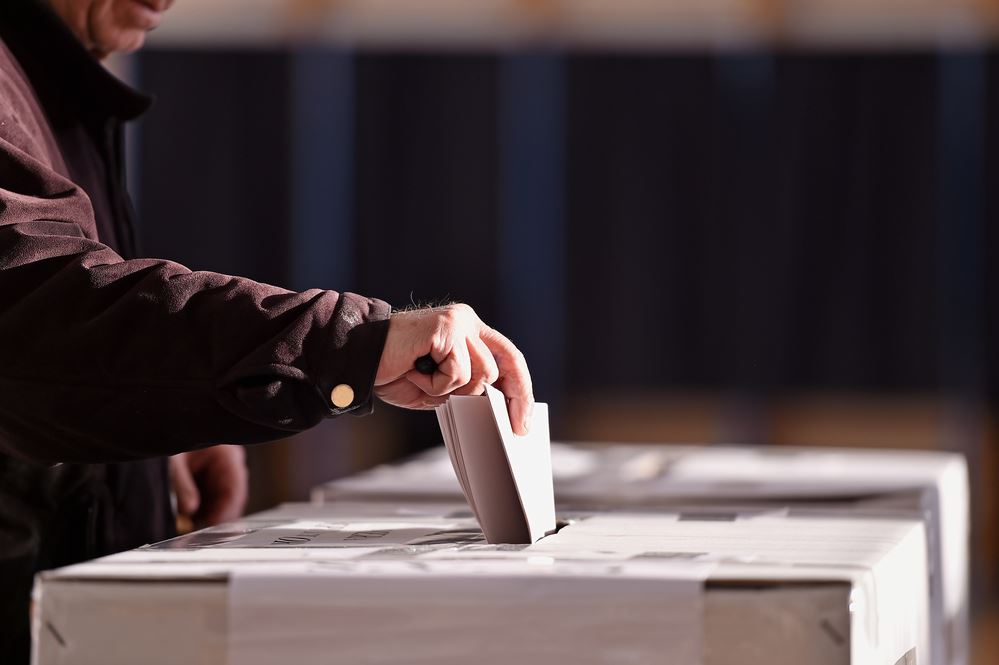 The current electoral system, which divides North Macedonia into six constituencies, clearly favours the main parties to the detriment of the smaller ones, that are now asking to move to a single constituency

The smaller government parties and the opposition in North Macedonia have presented a joint initiative in parliament calling for changes to the electoral system, hoping that the change will lead to better conditions for obtaining more seats. The idea is to have a single constituency in place of the current six, no electoral threshold, and abolish the financing of parties from the state budget.

A system which favours the largest parties

The current electoral model is regarded as benefiting only the main parties, as it eliminates any competition from new or smaller parties. Since the first democratic elections in 1991, the two main parties VMRO-DPMNE and SDSM have switched in government, often running alongside some of the smaller parties. On the Albanian political side, this system has favoured only the DUI party, which has been in government since 2002. In North Macedonia, despite the ideology present in their names, parties mostly have a national basis.

This initiative is not new. Parties have long talked about one constituency, open lists, and similar proposals during election campaigns. There have been several initiatives to change the electoral model in North Macedonia, including in 2019 and 2020, but they were always rejected and outvoted by the main parties.

There are also recommendations from the OSCE/ ODIHR to change the electoral model, which requires an absolute majority of 61 MPs out of 120. Since 1991, there have been 35 amendments (changes and additions) to the Electoral Code.

Also during the last election campaign there was talk of one constituency, but now the position of the parties is not clear. Levica, LDP, and VMRO-NP expect support from SDSM and VMRO-DPMNE, or they will block the parliament.

"Levica is currently the most damaged party in the system, which does not substantially articulate the interests of voters. With almost 40,000 votes, if there were one constituency Levica would have 5 MPs instead of 2", said president Dimitar Apasiev.

The ruling SDSM nominally supports the proposal, while VMRO-DPMNE believes that changes in the Electoral Code should only be discussed within the working groups.

"So far there has been no progress", said MP coordinator Micevski.

Albanian party Besa, now part of the government, disagrees and demands only three constituencies. "This model will reflect the ethnic, political, and geographical character of the country", stated its representative on the day the initiative was submitted.

The DUI has stated in the past that there may be three constituencies. It also accepts one constituency, but not the reduction of the number of Albanian MPs.

In Macedonia so far there have been three models for elections – majority from 1991 to 1998, a combination of majority and proportional in 1998-2002, and then a proportional system with six constituencies. A one-constituency system with open lists is considered a more democratic solution to overcome the two-party system in Macedonia and in the Albanian voting bloc.

In the parliamentary elections of 1990 and 1994, seats were distributed using the majority electoral model, with an absolute majority in the first round and a relative one in the second round. In 1998, a combined electoral model was introduced: 85 MPs were elected on the basis of the majority model, and 35 with the proportional mechanism for the entire territory of the Republic of Macedonia. The distribution of seats was based on the D'Hondt method, with a 5% threshold.

In the parliamentary elections of 2002, a proportional model was introduced for the distribution of all 120 parliamentary seats, with six constituencies and 20 MPs elected from each. Again the D'Hondt method was used – the principle of the highest average of the total number of votes in one constituency divided by the number of parties – that is considered to favour the larger political parties and coalitions.

In October there will be local elections for Municipal Councils. Every four years, mayors are elected by majority – if in the first round there is not a turnout of at least one third, there is a second round for the first two candidates. Councillors are elected according to the proportional model, and the distribution of seats is based on D'Hondt's formula.

There are nominal commitments to the introduction of open lists for councillors.

"Open lists are a good opportunity for citizens to elect the person they think is best, but also an attempt at democratisation within the parties", domestic analysts told the media after the Justice Minister announced the possibility. According to the Minister, this would be a start to change the electoral model and introduce a single constituency.