Shushi/Shusha, living in a symbol 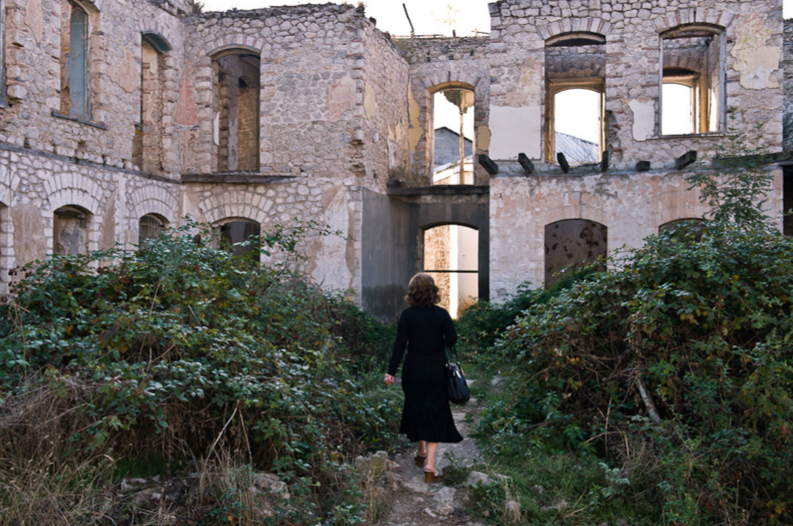 At the beginning of May 1992, in one of the hardest battles during the recent conflict in Nagorno Karabakh, the Armenians took the city of Shushi/Shusha. A portrait of the city 20 years later

“Imagine the most precious gem on the Queen’s crown, this is for us Armenians the town of Shushi”. With these words Cristina Rakedjan describes her town, located on a hill beside a deep and beautiful gorge in the “Republic of Nagorno-Karabakh (NKR)” or Artsakh, as their inhabitants prefer to call it. Whilst for the international community this country does not exist, and is part of Azerbaijan, in reality Nagorno-Karabakh has a solid border where a sniper war has continued silently since the ceasefire of 1994. An average of 30 people are killed on either side each year.

Wandering through the roads of Shushi/a is a unique experience. The many layers of change that have taken place in the recent past are still visible: living ruins almost demanding attention. But this is not Pompei and neither is it a dead town. It is alive, with more than 3,000 people breathing, loving and struggling like anywhere else. Not only its citizens have to handle their daily difficulties, they also have to bear the weight of living in a place saturated by history. The layers of events, which cover every corner of Shushi/a, made of it a powerful symbol for both the Azeris and the Armenians.

While for the Azeri Muslims Shusha, as they call it, is a lost cultural capital, for Armenian Christians it is the symbol of the resurrection against their difficult fate in history - not only a victory against Azerbaijan for the control of land, but also indirectly, a revenge after the genocide perpetrated by the Turks in 1915. 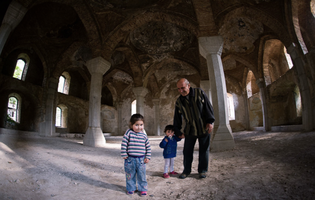 Go to the picture story "Shushi/Shusha: living in a symbol" by Elias Pinteri

The town was attacked and destroyed three times during the last century: in 1905 by both sides, in 1920 by the Azeris and in 1992 by the Armenians. Shushi/a, with its 40,000 inhabitants, was the second town of the Caucasus after Tbilisi. As the school principal Albert Kachaturyan likes to remember, before 1920 Shushi was known as the “Paris of the Caucasus”, because of its 22 typographies, the many theatres and a perfect sewer system yet unseen in Baku or Yerevan. After Azeri troops destroyed the Armenian quarters of Shushi in 1920, killing thousands of Armenians, during the Soviet period the interethnic conflict froze and the region of Nagorno-Karabakh was included in Azerbaijan. During this time the administrative offices were transferred to the nearby town Stepanakert and, during the 60s, Shushi/a came to life again and was known as a tourist and holiday resort within USSR. After the collapse of the Soviet Union, ethnic clashes started again. The Armenian minority was forced to leave Shushi/a and move to Stepanakert. Shushi/a became an Azeri enclave in the ethnic Armenian region of Nagorno Karabakh, within Azerbaijan. In 1991, following the independence of both Armenia and Azerbaijan and the declaration of independence of NKR, the war broke on full scale. The outpost of Shushi/a was used to put Stepanakert under continuous shelling. Between May 8 and 9, 1992 Shushi/a was finally taken by the soldiers of NKR and the Azeris were forced to move. NKR, backed by Armenia, fought with Azerbaijan until the ceasefire of 1994.

It is difficult to try to reconstruct these events in a neutral way, because of the confusion that arises from the many clashes of interests, religions and powers that are still into play. As the International Crisis Group reports: “Nagorno-Karabakh is widely exploited by the leaders of both Armenia and Azerbaijan to pursue domestic political agendas and discredit the opposition”. The history of this region is as entangled as the dense and wild forests of Artsakh, where peaks emerge now and then: it is easy to see those peaks but the road to reach them is tortuous.

As result of this conflict, hundred thousands of people have been displaced. Only considering Shushi/a, a part of its current population escaped from the capital of Azerbaijan, Baku, on the Caspian sea. Conversely, the Azeris who used to live in Shushi/a moved to Azerbaijan. There is an interesting difference between the two, as Saro Saryan, the Chairman of the NGO of the Nagorno-Karabakh refugees and formerly resident in Baku, points out “Because NKR de iure is still part of Azerbaijan, there is no international recognition of the status of refugees for the ethnic Amenians who escaped from Azerbaijan and came here.”

Despite this major difference both, Armenians and Azeris, have lost the houses where they born and the places where they grew up.

The only shoemaker in town, Armen Assrian, smiles when he remembers how beautiful it was to skip school and go with his friends to the Baku seaside. In the tragedy of war, people lost more than their friends and family: Djonik Tevosyan, in his small and neglected apartment, still cries when he remembers the loss of his friends in the massacres of Sumgait (not far from Baku), where 26 Armenians were killed in 1988. He didn’t just lose his friends there - he also lost his daughters. After he refused to take revenge, they stopped talking to him.

These stories of ordinary people caught in the misery of history lie behind the doors of the many neglected buildings in the town of Shushi/a. If Azeri voices cannot be heard here, the thousands of empty apartments are a powerful reminder that they too lived here.

When Larissa Harutyunian escaped from Sarov, a small village a few kilometres away from the current front line, alongside her children, she was still wearing slippers. Her youngest son, three years old, was hit by a shard of shrapnel. Luckily he survived. She wasn’t able to carry anything with her when she left. “Do you see anything old in this house? We hoped to go back to our villages to take our belongings but it never happened… Thank God they have not killed us. If there isn’t another war we will slowly be able to rebuild our lives.” However it is not easy to rebuild a life in Shushi/a, as it is difficult to forget the past. It is not only because the empty mosques and the closeness of the border with Azerbaijan. It is also because the priorities on the NKR agenda are: security, international recognition, and increasing the population. As an incentive the NKR government launched a “Birth Encouragement Program” offering each couple approximately 1,000 dollars at their wedding. Additional money is paid for each newborn child and a special prize, a house, is given if the couple raises 6 children under the age of 18. According to Armen Rakedjan, chairman of the NGO Aravni, the government should focus on creating a country where people would want to live, by improving the economy, creating employment opportunities and enhancing education. If young people do not find employment opportunities they will search abroad. Here most people, Armen continued, either belong to the military or work for the government - there are hardly any private companies. Karabakh survives just thanks to donations and money from Armenia, which are used to build hotels and to renovate buildings in order to generate temporary employment. These handouts hardly solve the problem for the longer term.

Davit decided to extend, as many others, his two-year mandatory military service, because of the good salary. But, he said, if the salary does not remain competitive he might search for employment abroad, in Russia or elsewhere. It takes more than a symbol for people to decide to stay.