Pashinyan and the Armenia of tomorrow 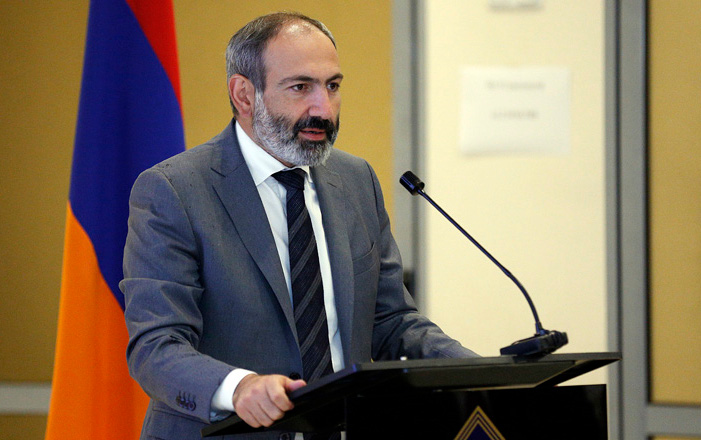 The so-called Armenian velvet revolution has paid off – Nikol Pashinyan has become premier. But now the real challenge begins – to change the country. To be able to do it, the new premier needs at least a parliamentary majority

The revolution becomes a brand and a trend – even in board games. "From today, monopoly must be just a game", was the slogan used for the launch of K'ayal ara (literally, "do something"), a sort of Armenian version of Monopoly as well as the most recent product marketed in the wake of the revolutionary enthusiasm that led to the resignation of veteran leader Serzh Sargsyan and the appointment of activist Nikol Pashinyan as Prime Minister.

The velvet revolution, as it was termed by the new premier itself, marks a fundamental change in the political history of the country since independence in 1991. With the post-Soviet apathy shelved, the 42-year-old former journalist promised to rejuvenate the institutional apparatus, to clean up the ranks, and to break the system of monopolies that has halted the development of Armenia, condemning a third of the population to poverty and emigration.

Between want and power

The popularity of "Pashinyan the Pasionario" is skyrocketing, granting him a privileged position to successfully lead the new government while still learning the ropes of the country's complex political landscape. There is no lack of criticism, but at the moment observers are divided between those who are cautious and those who are more optimistic. Anna Ohanyan is among the latter. According to the professor of political science at Stonehenge College, Massachusetts, the Armenian movement has indicated a possible path for "hybrid regimes", i.e. governments that, like Armenia under Sargsyan, are in precarious balance between democracy and authoritarianism. Armenia's success, she adds, is linked to the very roots of the movement.

"History teaches us how clamorous transitions, imposed from above or guided by an elite, are unsuccessful", she said at a conference organised by the Institute of Armenian Studies of the University of Southern California. "The Armenian protest was strategically peaceful, started from the grassroots, and remained [respectful] of the institutions, which are very promising foundations. [Pashinyan] has shaped a civic engagement that started 'from below', which is vital to prevent an authoritarian backlash".

Meanwhile, in Yerevan, the monopolies are shaking. The police arrested the closest collaborator of Mihran Poghosyan – a general, but above all the holder of the monopoly for the import of bananas, citrus fruits, and tropical fruits in the country (he was involved in the Panama Papers investigation). The price of bananas dropped from around € 9.50 per kilo in April to € 5.50 per kilo on May 23rd – a revolutionary decline.

The commitment to refresh the government has been, in part, maintained. The new team boasts under-40 professionals such as Tigran Avinyan, who at 29 is the youngest deputy prime minister in Armenian history, but also includes personalities in positions of power in the past, such as Minister of Defense Davit Tonoyan and Finance Minister Atom Janjughazyan – both had already held the position of deputy minister in their respective departments.

These decisions are in line with the stated commitment to avoid "purges", but they also reflect a skillful, necessary political strategy based on figures, or lack thereof. Pashinyan's resources are reduced to minimum terms, or better, to minimum seats. The Yelk (Way Out) parliamentary coalition, which includes his Civil Contract party, holds 9 seats out of 105 in the National Assembly. The Republican Party takes the lion's share with 69. To move from the desire to clean up the country from the practices of the ancien regime to the ability to do so, the new leadership needs to gather a broader parliamentary consensus and is therefore working with other parties – especially businessman Gagik Tsarukyan's "Prosperous Armenia" and the Revolutionary Federation (also known as Dashnaktsutyun), already a coalition partner supporting Sargsyan's HHK. The idea is to remove the rotten, corrupt apples, but not to throw away the crate.

Other promises have not been kept. In the speech that preceded his appointment in Parliament, Pashinyan praised the fundamental role of women in last April's mobilisation, stating that this role would be rewarded. The appointment of only two women at the head of a ministry – Lilit Makunc to Culture and Mane Tandilyan to Work and Social Affairs – has generated quite a few reproaches on the Internet.

Among the cautious, or at least awaiting, voices is Armine Ishkanyan, a lecturer at the London School of Economics. "Despite all the speeches [from Pashinyan], it is not yet clear what his socio-economic agenda is", explained the expert to Eurasianet.

The immediate challenge is consolidation. It is necessary to redesign the electoral law, which currently favours the HHK, to go to the polls as soon as possible and, in the meantime, to keep up enthusiasm and support towards Pashinyan until the day of the vote that the prime minister would like to schedule in autumn.

The lesson of coloured, and faded, revolutions

Keeping the fire of passion alive is not easy, even at times of social networks. And considering the anomalous nature of the Armenian experience, it is natural to ask oneself: was it a real revolution? For Michael Cecire, an analyst at the New America think tank in Washington, it depends on who asks the question – and who answers. The last fifteen years of history in the post-Soviet space teach how the expression "revolution" has become synonymous with anti-Russian movements, manipulated by organisations that promote a model of Western democracy or by intelligence agencies. "The [Kremlin's] rhetoric has also defined it as a form of western hybrid war", explains Cecire, who acknowledges the considerable cunning of Armenian protests.

Pashinyan has adopted the strategy of movements of the past, such as Electric Yerevan, and has carefully avoided references to the various coloured and floral revolutions, underlining the specific internal reasons at the basis of the dispute. As Thomas de Wall, an analyst at the Carnagie Institute in London, wrote, "sometimes protests in Armenia are just Armenian protests", to imply that geopolitical readings are not labels that can be applied everywhere. Not only did the new premier and his supporters make a point to state that there was no anti-Russian motive – publicly reading a Kremlin statement that recognised and respected the "internal" character of the protest. Moscow's measured detachment, the quick congratulations to Pashinyan, and the latter's meeting with Vladimir Putin less than a week after his appointment suggest that the strategy worked.

Observers hope that the regime change will maintain its anomalous character, if only because the fresh reformist wind that blew from Ukraine to Kyrgyzstan via Georgia between 2003 and 2014 soon turned into a sticky stain. Looking at the Rose Revolution, a success that withered and died, David Usupashvili points out three dangers for Armenia. "Over the years, the revolution turned into a battle between good and bad politicians, not between good and bad policies", explained the former president of the Georgian parliament, adding that it is a detrimental metamorphosis. "Then, the new government must have an exit strategy (...) because, beyond the policies implemented, no one should think that a good government coincides only with a particular team or individual and peaceful transfer of power is the key to democratic development".

But it is in the relationship with the citizens that lies the hardest trial – where every post-Soviet revolution has failed, to varying degrees.

"At the fall of the USSR, the concept of 'person' for the new governments has passed from 'Soviet comrades' to 'democratic voters', entirely skipping the notion of 'citizens'. Politicians look at the population in terms of the votes they need to remain in power. Making every Armenian a citizen is the great job awaiting the new leadership".

The issue of Nagorno Karabakh

The management of the time bomb that is Nagorno Karabakh remains the other key node in international politics, although closely linked to internal dynamics. The conflict with Azerbaijan for the control of the region – officially in Azerbaijani territory, but de facto independent – remains a sword of Damocles over Armenia's head. The need to revive negotiations, that have dragged without results since the ceasefire signed in May 1994, is real. In a speech in Republic Square on May 2nd, Pashinyan reiterated that "the Republic of Nagorno Karabakh is an inseparable part of the Republic of Armenia".

If unification with Armenia was the goal of the Karabakh movement, which started in 1988, independence is today the main objective of the region, now inhabited by about 150,000 Armenians, for whom the link with Yerevan is still essential.

The day after his appointment, Pashinyan flew to Stepanakert to participate in the May 9th parade, commemorating the victory over Nazism as well as the conquest of the city of Shushi/Shusha in 1992 (the first significant Armenian victory in the conflict). On that occasion, the new prime minister insisted that the Armenians of Karabakh "take direct part in the negotiations for the resolution of the conflict, sitting down at the negotiating table" – an important statement, given that mediation, through the Minsk Group chaired by the Organization for Security and Cooperation in Europe (OSCE), today involves only Baku and Yerevan.

According to the analyst Thomas De Waal, the danger is that if Pashinyan were to venture "to openly affirm the sovereignty over Nagorno Karabakh and that the [seven] Azerbaijani regions around it, occupied by the Armenian forces in 1993-1994, cannot be returned, nothing would remain to be negotiated with Baku – we would return to war.The four-day war of April 2016, which caused about 200 victims, is a recent sad reminder of how high the cost is.The ceasefire is constantly broken, with an Azerbaijan soldier killed last May 20th".

Meanwhile, in Yerevan, the monopolies are shaking. The police arrested the closest collaborator of Mihran Poghosyan – a general, but above all the holder of the monopoly for the import of bananas, citrus fruits, and tropical fruits in the country (he was involved in the Panama Papers investigation). The price of bananas dropped from around € 9.50 per kilo in April to € 5.50 per kilo on May 23rd – a revolutionary decline.