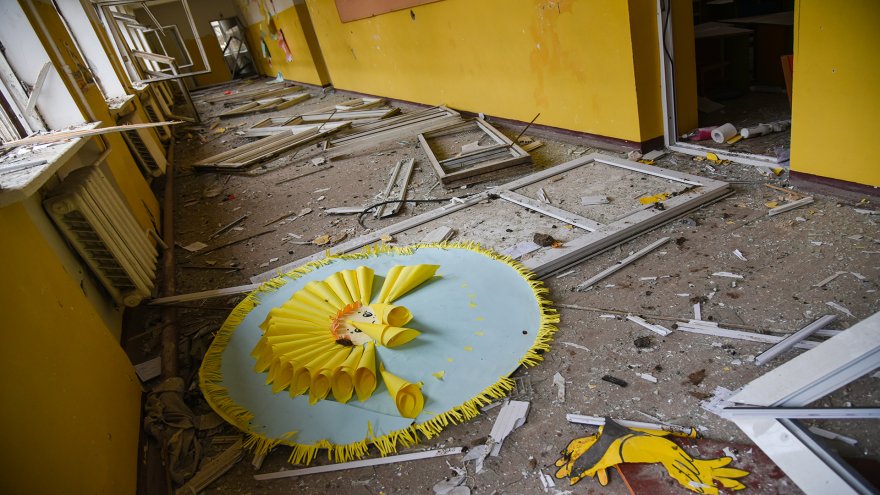 A severely damaged school in Nagorno-Karabakh – photo by Armine Avetysian

The outbreak of the war in Nagorno Karabakh caused 100,000 displaced persons and 30,000 schoolchildren and students could no longer attend their schools

“It was Sunday, we were not at school but at home, otherwise we would not have survived, we heard unceasing explosions and gunshots”. Lilit, 14, recalls the morning of September 27, 2020.

On that day, intense bombings hit the entire line of contact between Azerbaijan and Nagorno-Karabakh, the unrecognised state mostly inhabited by Armenians. A few days after the start of hostilities, Lilit moved to the Armenian capital Yerevan with her mother. Staying was no longer safe.

“After moving, I could not think of going back to school. I had completely different thoughts in my head. Then I got better and realised that I was behind in my studies. I was conflicted, I wanted to study and at the same time I had no desire to open a textbook”, says Lilit. In those days, after registering in Yerevan, she received an offer from the Ministry of Education to attend a school near the new place of residence.

All displaced minors in Armenia were given the opportunity to attend the school closest to their place of residence, regardless of vacancies. They also received textbooks and stationery.

Many friends of Lilit's accepted the offer, but she refused.

“I could not go to another school. I kept thinking of mine. It was very hard. I preferred to attend volunteer classes”, she says.

“There was an announcement about volunteers on the Internet. I registered. A few days later, they called and offered me to teach the children who had moved from Nagorno-Karabakh to Yerevan. I gladly agreed”, says Ani, a foreign language specialist who spent several weeks teaching children that war robbed of their right to education.

Ani volunteered for about 20 children hosted in a temporary shelter in Yerevan with their mothers. The beginning was difficult for both her and the children, but soon everything got better.

“I was given a small room in the apartment where children stayed. I divided them into 2 groups according to their age. I taught them foreign languages, Armenian, and history. There were also other volunteers. We tried to include each and every child. Saying it was difficult is an understatement. The children were under stress. They often talked about their native village, school...”, recalls Ani, adding that through play they were able to integrate children into the new environment and ease the stress, at least in part.

On 27 September 2020, a new, violent chapter opened of the conflict between Armenia and Azerbaijan over Nagorno Karabakh, with hundreds dead and wounded. A conflict that has never been resolved in thirty years. Our dossier

The conflict ended on November 9 with a ceasefire agreement that redesigned the borders in the South Caucasus. In this dossier the situation in the Region

“We also organised trips in the city. Step by step, the children found some normalcy. When they started returning to their hometowns, it was hard to say goodbye”, says Ani, noting that many friends of hers also volunteered in dozens of other centres where children were sheltered.

According to the Armenian Human Rights Defender, over 100,000 civilians of Nagorno-Karabakh were displaced during the hostilities. Over 40,000 people were left homeless. About 30,000 schoolchildren and students were deprived of their right to education. 12 kindergartens and 71 schools were damaged or destroyed.

“Children enjoy special respect; they are protected from any form of harassment. The parties to the conflict shall ensure their protection and assistance”, reads the Protocol to the Geneva Conventions on the “Protection of Victims of International Armed Conflict”. This principle is also enshrined in the UN Convention on the Rights of the Child. And yet, children all over the world have suffered and are suffering because of hostilities.

“Fortunately, our school was not damaged and I was able to go back. I have many friends who could not. Some say: “What difference does it make which school you attend or if you miss some classes?”, but not many. It seems to me that my friends and I will never be able to forget those days”, Lilit says.

Classes in the secondary schools of Nagorno Karabakh resumed on November 30 last year. Many students have already returned to their schools. However, there are still children who attend schools in Armenia – some have lost their home, others are not yet ready to return.