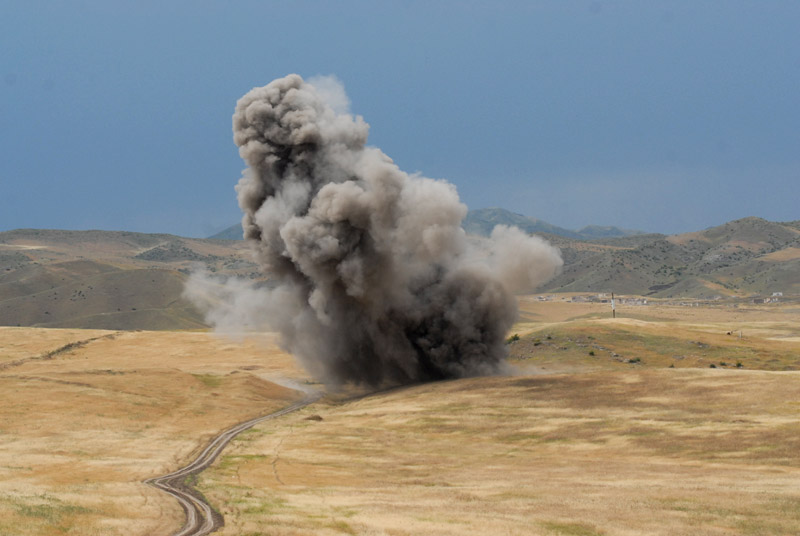 Armenia and Azerbaijan fought a war over Nagorno Karabakh in the early 1990s. Around 25,000 were killed and nearly a million from both sides forced to flee their homes. Although hostilities were put on hold by a 1994 ceasefire agreement, in addition to skirmishes on the frontline, landmines and unexploded ordnance (UXO) continue to pose a threat to life

When Artur Khudatyan found a metal object close to his village of Hin Taghlar in the Hadrut region of the unrecognized and self-declared Republic of Nagorno Karabakh, the 13-year-old was unaware of the danger it posed. Although the teenager had received Mine Risk Education (MRE) at school, he nevertheless failed to recognize the object as a cluster bomb. Attempting to open it with an axe in the yard of his house, the bomb exploded. Fortunately for Khudatyan, however, its full load of lethal bomblets failed to detonate. If it had, he might well have been killed.

In the nearly 17 years since the ceasefire between Armenia and Azerbaijan brought a relative calm to Nagorno Karabakh, a tiny area covering just 4,400 square kilometers, as many as 328 civilians have been killed or injured by landmines and unexploded ordnance (UXO). At least six accidents, such as the one involving Khudatyan, occurred in 2010. In total, the British HALO Trust Charity , the only mine and UXO clearance organization operating in the the self-declared but unrecognized republic, puts the total area covered by minefields at 5,093 hectares, with over 30,000 hectares affected by cluster bombs.

The HALO Trust started operating in Nagorno Karabakh in 2000 and has since cleared most of those areas. According to its own data, over 80 percent of minefields and 70 percent of areas affected by UXO have been cleared. In total, over 10,000 landmines have been located and destroyed along with over 50,000 items of UXO. Operations are also not just confined to the territory of Nagorno Karabakh either, with the HALO Trust also clearing mines from areas around Lachin and other locations in the surrounding buffer zone currently under Armenian control.

Known as ‘green areas,’ these locations were once inhabited by Azerbaijanis before they fled during the war, and in the event of a breakthrough in negotiations will likely be resettled again. "A peace deal will be signed one day," Simon Porter, former program manager for the HALO Trust in Nagorno-Karabakh, told this reporter in 2001, "and we are in the perfect situation to tackle the problem sooner rather than later. Otherwise, there will be significant problems when [Armenian] villagers attempt to farm their land, or when [Azerbaijani] refugees and internally displaced people (IDPs) return to their homes."

"There aren't mines everywhere, but it's obvious that there are likely to be many in areas where fighting took place," added Shane Pritchard, Porter’s successor, the following year during UXO clearance in Fizuli, an Azerbaijani town now razed to the ground and situated well outside of Nagorno Karabakh proper. "There are mines in a number of 'green areas' that were formerly Azeri villages in between Karabakh and the front line and that are now being resettled [by Armenians]. We can remove the threat before people hurt themselves."

As testimony to that, according to Armenian press reports quoting Ministry of Defense sources last week, two Armenian soldiers were injured after inadvertently entering a minefield in Kelbajar, a region sandwiched between Armenia and Nagorno Karabakh on the last day of December 2010.

However, even if the remainder could be cleared in 4-5 years that is now looking less likely given cuts in HALO Trust’s funding for 2011. According to Roly Clarke, HALO’s current program manager in Nagorno Karabakh, a 2007 agreement with the British Government came to an end last year and $400,000 will be cut from the charity’s budget. Most of the remaining financing will be made up from over $1 million from the United States Agency for International Development (USAID)  alone, as well a smaller amount from the Julia Burke Foundation .

“Funding from the British government has been cut because it changed their mine action strategy,” Clarke says. “They came up with a list of countries that will receive mine action funding and Nagorno Karabakh wasn’t one of them. The loss of 60 deminers will mean a consequent reduction in the mined and cluster munition contaminated areas cleared in Nagorno Karabakh in 2011. This unfortunately means [that our operations] will be extended by several years. HALO has tried to raise funding from other governments, but Nagorno Karabakh’s political status and the politics that surround the region have made it impossible so far for any other government to fund HALO.”

Nevertheless, despite the cut in funding from the U.K.’s Department for International Development (DFID) , the British Embassy in Yerevan did host an event for the HALO Trust early last month. Ironically, the meeting was coincidentally held on the same day that Artur Khudatyan was injured. Marking 10 years of its work in Nagorno Karabakh, the local media was invited in the hope of attracting increased attention to the problem and perhaps interest from potential donors. In particular, one possible source of additional support could be the large Armenian Diaspora. However, Clarke says, that is not proving as easy as it first might sound.

“We tried very hard to raise money from the Diaspora in America in 2007, and then last year, but with limited success,” he explains. “HALO USA which has two offices in Washington and San Francisco approached all the major Armenian organizations last year. An appeal signed by the current president of Nagorno Karabakh, as well as his predecessor, was sent out to a Diaspora mailing list provided by his representative in Washington, the media was contacted, but very little money was raised - a few thousand perhaps. Also, the Hayastan All Armenia Fund  was approached in 2007, but that again failed to raise any money for HALO as well.”

“With political issues preventing many donor governments from committing funding to HALO in Nagorno Karabakh we’ve had to look to the Diaspora for support to directly help some of poorest people of Nagorno Karabakh,” Clarke explains. “Agricultural land cleared of mines would enable rural farmers to cultivate them for the first time since the war and cluster bombs removed from villages would literally save people’s lives.”