Media in Moldova: oligarchy in power 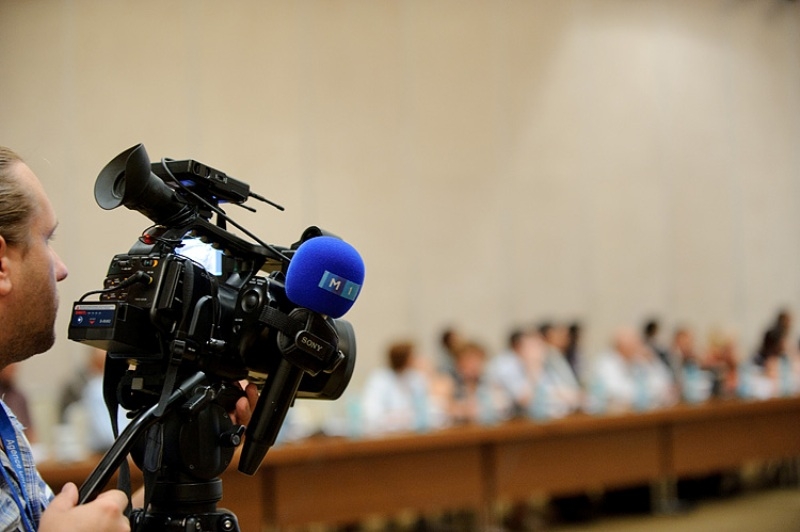 Nadine Gogu heads a centre in support of independent journalism in the country. She tells us about media oligarchs, Russian propaganda, and the future of online information

The recent presidential elections in Moldova ended with the victory of socialist candidate Igor Dodon in the run-off. As always happens, the media played an important role in the election campaign, sometimes openly taking sides. Their action was monitored by the Centrul de Jurnalism Independent based in Chișinău.

The centre is a non-governmental organisation that supports journalists and media in Moldova. Its goal is to facilitate the development of an informed society by strengthening the free press and the new media through journalism training, public relations, awareness-raising campaigns, research, and non-profit publishing of journalistic products.

We met director Nadine Gogu to discuss the situation of journalism in the country.

What is the media landscape in the country like?

Media ownership, especially for broadcasters, is highly concentrated. Thanks to the Transparency Act adopted three years ago, we now know that oligarch Plahotniuc owns 4 out of 5 TV channels with national coverage (Publika, Prime, Canal 2, Canal 3), in addition to controlling about 60% of the shares on the information market. This means that most of the population, especially in the villages where not everyone can afford the "complete TV package", only has access to the TV channels owned by this oligarch. This situation clearly affects the impartiality of information as well as its quality.

During the election campaign for the presidential elections, we monitored 28 media outlets, including 12 television channels. Most of these – especially those with national coverage – were used for propaganda purposes in support of a candidate or against another. The channels owned by Plahotniuc (who is a member of the Democratic Party, ed.) openly supported Democratic candidate Lupu, while two broadcasters blatantly sided with Dodon (MTV, Accent) and one with Maia Sandu (Jurnal TV). By propaganda, I mean channels giving more space to one candidate over another or reporting negative or false news regarding competitors.

Why is it difficult to address these problems?

One of the key factors is certainly the fact that the Board of coordination on radio and television broadcasts – the media monitoring body – does not perform its duty with due efficiency. The channels that decide to cover the election campaign must sign a declaration in which they commit to comply with the regulation laid down by the Board. However, the latter usually puts in place only a "semblance" of control and does not apply sanctions in the prescribed terms and timing. In this last campaign, for example, some sanctions were applied, but with just a public warning at the first infraction and then a €200 fine at the second. Needless to say, such measures have very little impact.

The only measure of potential impact, since it would result in significant financial losses for broadcasters, is the suspension of commercials for 2-3 days, but it has never been implemented. The Board is also required to file reports on the behaviour of media outlets during the campaign, but it does so at such a slow pace that not all reports have been published yet. So, even if further infractions emerged, the aim of unfair behaviour have by now been accomplished.

Have there been improvements over the years?

On the contrary, I would say that the situation has worsened. Until 2009-2010, under the Communist Party, the situation of the media was stable even if problematic. Later, with the so-called pro-European parties in power, there have been improvements – a law on press freedom was passed and the country's status went from "not free" to "partly free".

However, with the transparency amendment I mentioned earlier, Plahotniuc came out into the open and took official ownership of all the channels that were formally managed by different people, although on his behalf. His strategy has thus become more "aggressive", with great damage to pluralism – the coverage of the last election was far more partisan than that of the previous rounds.

This is a very small market, which makes it difficult to curb concentration of media ownership, as any independent channel would struggle to find the necessary funding.

Any significant changes in the online information landscape?

Some outlets are doing a great job – Rise, Ziarul de Garda, Newsmaker – but the general picture is dim. Although the sector is growing with more and more daily contacts, this includes many propaganda sites, managed on behalf of politicians who use them for self-promotion or to attack other candidates. Above all, there is no transparency: it is not compulsory to disclose the identity of the directors of online publications, so no one is prosecuted when they disseminate false or outright criminal content. I think that this lack of regulation of the online space will become a serious issue in a few years, and action will need to be taken.

As for independent media, today they are fully dependent on donor organisations and fail to attract investors. Hopefully, in the future, with the increase in demand for information independent from politics, even investors may change their strategy and begin to fund more deserving outlets.

Another deeply felt issue is the so-called "Russian propaganda". How would you comment on this?

This issue, clearly exacerbated by the conflict that broke out in Ukraine, does not involve only Moldova, but also other areas of the post-Soviet space (like the Baltic countries). The European Commission itself has recently raised the problem. Many of our channels rebroadcast Russian programmes – not just news, but also lots of entertainment. Sometimes they are also mixed with local programmes and – according to our research – not all viewers are able to distinguish the origin of the material. In my view, it is a way for the Russian Federation to maintain a certain influence on our region and spread its own perspective on events that occur in the surrounding countries.

Last spring, the government presented a bill which, among other proposals, banned the broadcasting of programmes by countries that have not ratified the International Convention on television broadcasts (including Russia), also to promote the production of local material. The latter, however, is a crucial point: given the present circumstances, such a measure would favour those who monopolise the Moldovan market and therefore already own the means to start their own programmes, and namely Platohniuc. What we, as an association, ask the institutions is to ensure a condition of balanced competition before discussing the specific development of programmes.

What other ways are there to promote good journalistic practices in the country?

With the Centrul de Jurnalism Independent, we try to support the training and development of professionals. Our Advanced School of Journalism seeks precisely to provide newcomers in the field with the tools they need to produce in-depth, unbiased information.

In Moldova there is an ongoing generational change, and every year young journalists join newspapers and television channels – it is important, therefore, that they are as prepared as possible. In parallel, we organise seminars with international experts and journalists who can give us different perspectives on some issues, or simply create transnational collaborative networks. In addition, we promote lobbying towards the institutions for the approval of certain laws or for accountability when basic standards of freedom of the press are violated.

Finally, I consider it important also to engage users of journalism. We produce a programme that talks about journalism, highlighting the criteria behind the choice and the broadcast of news. In addition, we are launching a collaboration with schools to educate students to the reading of newspapers and the reception of audiovisual programs. It is crucial that more people develop the critical skills necessary to be informed in an appropriate manner.