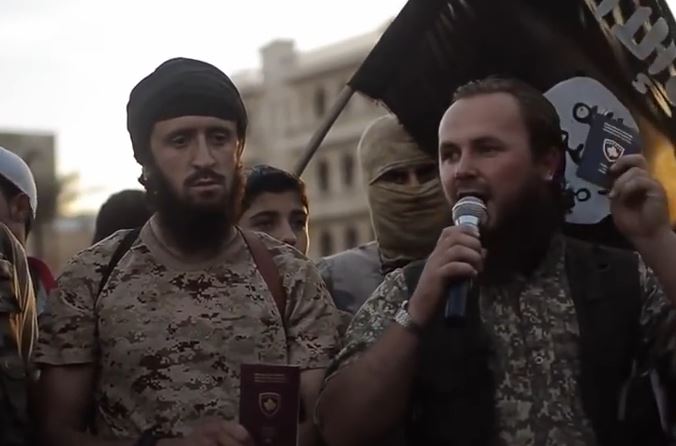 After a major police operation, that recently resulted in 40 arrests of people suspected of engaging in conflicts in Syria and Iraq and supporting terrorist organizations, Kosovo institutions mobilized to fight religious extremism in the country

The involvement of Albanians in the spread of religious radicalism and terrorism in Syria and Iraq has mobilized the NATO mission in Kosovo, besides national security forces. The Italian commander of peacekeeping troops in Kosovo, Maj-General Salvatore Farina, called a meeting with religious leaders in Pristina following a wave of arrests of Kosovar nationals suspected of fighting with Islamist rebels in Syria and Iraq.

Heads of Islamic, Orthodox and Catholic communities urged their fellow believers to stay away from any form of extremism or violence and support peace for a better future. They condemned who uses the name of God to perpetrate criminal act against humanity, adding that religions should never justify hatred and violence.

The rule of law institutions have increased their vigilance and the Parliament will soon pass legislation banning citizens from joining foreign insurgencies, with a maximum sentence of 15 years in prison on conviction.

The move follows a major police operation a few days ago that resulted in 40 arrests in 60 locations in Kosovo of people suspected of engaging in conflicts in Syria and Iraq and supporting terrorist organizations. Explosive, weapons and ammunition of various calibers were seized in this operation. The arrestees denied being involved in terrorist organizations ISIS and Al-Nusra. They were held in custody for 30 days for threatening national security and the constitutional system. Three other individuals were arrested afterwards, among them an imam from Gjilan, Zekirja Qazimi, who is suspected of being one of the main proponents of jihad, according to a police statement. Police are still searching for dozens of suspects. According to Prosecutors Office, there are 96 people in total under investigation.

The majority of the population in Kosovo is Muslim. According to the Constitution, the Republic of Kosovo is a secular state and is neutral in matters of religious belief. Indeed, most Kosovo Muslims have a liberal attitude towards other religions, considering religion to be a private matter. Religious tolerance was seen as one of Kosovo's main assets for many years. The State Department, in its 2013 report on religious rights, estimated that anti-Semitic hate speech is increasing in Kosovo among some religious clerics.

President Atifete Jahjaga said that Kosovo will not be a shelter for extremism. The head of the Islamic Community in Kosovo, mufti Naim Ternava, in an interview with the US radio broadcast Voice of America, said that since 2012, they have been actively lobbying against participation of Kosovo youth in ISIS or other terrorist organizations, which he says “have nothing to do with the real Islam, with its principals and rules, with Qu’ran and Hadith” .

Authorities in Pristina believe that 100-200 Kosovo Albanians, mainly youth, have joined terrorist groups in Syria and Iraq and that 16 have been killed so far. In July, traditional Muslims in Kosovo were shocked when an ISIS fighter, Lavdrim Muhaxheri, a 25-year-old from the small city of Kaçanik, posted photos on his Facebook page decapitating a Syrian soldier.

But what motivates Muslims in Kosovo to join Islamist militants in Syria and Iraq?

“Some individuals in Pristina fall prey to propaganda by people living outside Kosovo who call them to participate in a 'holistic' war and they don’t analyze the situation. I think that the main reason is blind religious indoctrination which was served to them via the Internet, and videos urging youngsters all over the world to join the struggle to overthrow the Assad government. Then, they slipped into a sectarian war lead by radical Islamism groups similar to al-Qaeda, which put the war on the very different course that we see today”, says Xhabir Hamiti, professor at the Faculty of Islamic Studies and one of the key religious clerics in Kosovo.

Some NGOs from the Middle East that have operated in post-conflict period in Kosovo under the humanitarian umbrella are also believed to have misinterpreted Islam amongst uneducated and poor people. An investigative journalist in Pristina, Serbeze Haxhiaj, says that the lack of job opportunities for youth in Kosovo and the harsh socio-economic situation are also important elements that stimulate people to join paid radical groups.

“Also I think that youngsters who go to fight are being brainwashed beforehand by different religious leaders and preachers who mainly are educated in Arab countries. For sure, their lectures are in contradiction with traditional Islam, which is perceived as liberal compared with Islam in Arab countries,” she noted.

The Executive Director of the Kosovo Center for Security Studies, Florian Qehaja, says that the religious-based radicalization in Kosovo increased from a low level in the immediate post-conflict period to a high-level threat nowadays. “Certainly, there are a number of indicators which support this assessment: firstly, the radical groups promoting political Islam cannot further disseminate their influence in society beyond the existing community (albeit small). This means that these groups are in the position to use violence to further expand their sphere of influence; secondly, the fact that some of the Kosovars went to the Middle East makes them the most "prepared" individuals in terms of combat readiness in which the use of force is imminent in light of the methodology they apply and, thirdly, the groups within Kosovo are well organized, funded and prepared”, Qehaja elaborates.

Analysts warn that Kosovar youth involvement in terrorists groups in Syria and Iraq could jeopardize national security if more people are recruited, creating a network with terrorist groups, and poentially use force against the state targets in order to achieve their goals. Furthermore the latest events are also challenging Kosovo’s effort to get more international recognition for its independence from Serbia.

“These latest events support the argument of non-friendly countries which tend to see Kosovo society through the perspective of religion (Islam) and not through the real perspective of predominant secular society. Secularism was developed in Kosovo at large, especially during the times of communism as a result of a softer version of Islam applied during the Ottoman Empire,” says the Executive Director of Kosovo Center for Security Studies, Florian Qehaja.

Following the latest developments, Kosovo should have a comprehensive approach to counter the spread of religious radicalism and terrorism. Professor of theology, Xhabir Hamiti, says that there is a need to raise awareness among youth that extremisms in not part of any religion, much less Islam. He said the Islamic Community should take a lead in this educational and awareness campaign supported by national intuitions, media and civil society.