The last ones: Serbian and Russian prisoners on the Alpine front

The last ones: Serbian and Russian prisoners on the Alpine front 28/05/2019 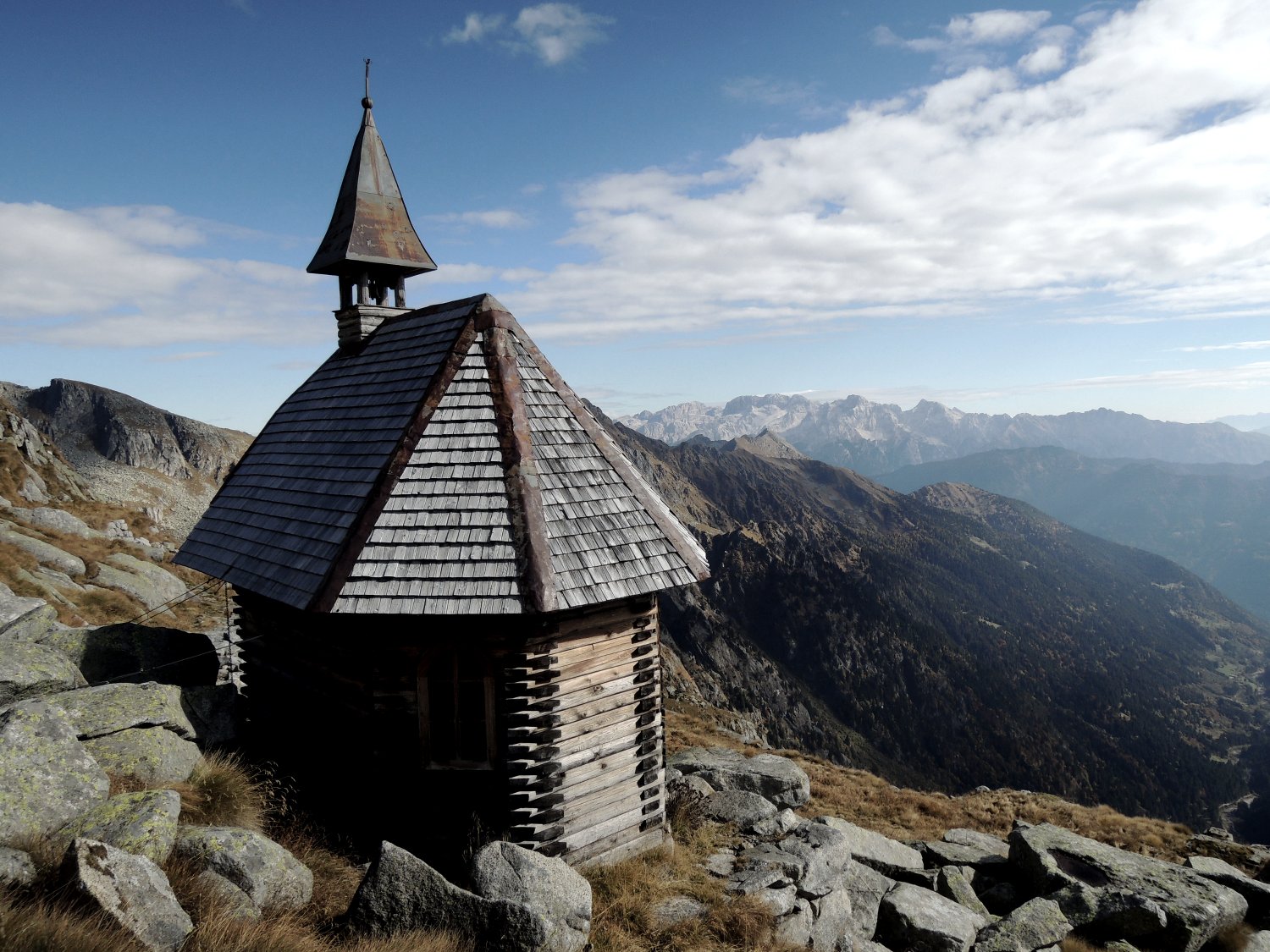 A hundred years after the end of the World War I, the experience of Russian and Serbian war prisoners in the Alps remains almost unknown or forgotten. Thousands of them were employed as workforce by the Austro-Hungarian troops 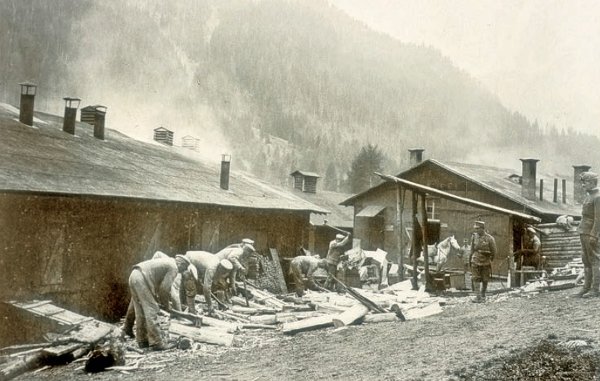 Sunday, November 4th, 2018 will be the centenary of the entry into force of the Villa Giusti Armistice and the cessation of hostilities between Italy and Austria-Hungary. In those days, a diverse humanity returned to civil life on the Alpine front, where the two armies had fought hard. Individuals from different backgrounds, who for years had been crushed between the mechanisms of a war increasingly swallowing the valleys and peaks of Trentino-Alto Adige. A local writer and mountaineer, Dante Ongari, telling after decades about the war events in the Giudicarie valleys, effectively evokes the organisation of that universe, bent to military effort:

"Columns of women, kids, and elderly men, pushed by the need for a loaf of bread, travelled every morning back and forth between Borzago and malga Coel, loaded with wood or other materials. The resumption of the exhausting journey from Coel to the Caré Alto shelter was enabled by the forced labour of Serbian and Russian prisoners of war, guarded by Bosnian, Croatian, and Czechoslovak guards, who somehow managed to understand each other in their various languages. The Serbs, of a more rebellious nature, were the pariahs of the nascent organisation, while Russians enjoyed more leniency as more docile and skilled wood craftsmen – for their work, two Venetian sawmills had been put into operation in Baùt and Pian della Sega. The prisoners lived packed in the barns of the Valaverta and Cornicli haylofts, while a hut in front of Solan had been built for the Bosnians along the Coel mule track".

A story that plunges into the background, where life was painful despite the distance from the first line. Words effectively recalling the First World War on those mountains as a crossroads of languages ​​and people, many of them from countries of Slavic culture. Croats, Slovenes, Czechs, Slovaks, and Bosnians – among others – in the Austro-Hungarian troops; Serbs and Russians among their prisoners of war; and finally Czechoslovak legionaries alongside the Italian army. These categories were not intended in a strictly ethno-national sense. In the Bosnian departments fought Catholics, Orthodox, and Muslims that today would be called Croats, Serbs, and Bosniaks. Russian prisoners were simply referred to as coming from the Tsarist Empire, and sometimes even Serbs were incorporated into this category. They lived those years of war alongside each other, fighting or working. Many could not see the end of hostilities in the Trentino- South Tyrol mountains and today remain buried in the various Austro-Hungarian cemeteries scattered throughout the region.

In Trentino-South Tyrol, World War I has been rarely told from this point of view. For a long time, the irredentist narrative was in fact hegemonic in the public space: Trento and Trieste reunified with the Italian motherland. Little else. Then, thanks to the work of a particularly careful local historiography, we began to face the complexities of a ravaging war: the buried memory of the local civil population, the refugees in the Habsburg and Italian territories, but also the memory of the Trentino inhabitants fallen wearing Austro-Hungarian uniforms. As shown by the debates on the centenary, divergences of interpretation with respect to the First World War still remain, and so do readings dictated by the political agenda, like using the century-old Piave patriotic song's "the foreigner shall not pass" in order to invoke a new "defense of borders" against today's migrants.

Anyway, little space has been devoted to those foreigners who were dragged by war to these border areas. This is true for the fighters from the hundred corners of the Empire, but especially for those who fought no more: the prisoners of war – especially Serbs and Russians – captured on the Eastern or Balkan front and dragged by the thousands to Tyrol as forced labourers. As explained to us by Quindo Antonelli, a historian who has studied in depth the memory of the First World War, "research has stood by the national principle – Italians first – and a hierarchy was defined: first military history, soldiers, then political and diplomatic history, then civilians, injured bodies, and prisoners. Prisoners, however, are completely left out of Trentino's public memory. The victimisation narrative of an innocent people subject to all kinds of violence cannot admit other victims, let alone victims of Trentino inhabitants". For many years, the topic has been treated only in local publications: when historians lower and circumscribe their gaze, it is in fact impossible not to see those masses. In his pivotal study dedicated to the conflict on the Alpine front, Diego Leoni finally included them in the overall picture of the "vertical war". He speaks of a "below", of a presence "in the background", their bodies the lowest gears of the war mechanism, crushed and killed by hardship and fatigue.

In landscape and in popular writing 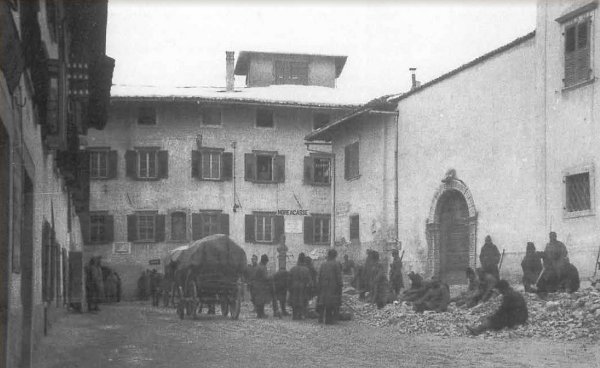 In 1915, the prisoners of war seem to have already been 27,000 throughout Tyrol. They were employed almost everywhere, as field labourers or woodcutters, but above all exploited in the radical transformation of the Alpine environment in service of the war effort. Serbs and Russians built forts, trenches, and barracks, but also the railways of Val di Fiemme and Val Gardena, the road that now takes to Val Badia, and stretches of the Valsugana road, just to give some examples. The inhabitants and tourists who now cross the villages and climb the Trentino and South Tyrol peaks can still find traces in the toponymy: the "Serbs' path" in Vallagarina, the "road of the Russians" in Val S. Nicolò and on Mount Misone, the so-called "blood road" in Val d'Adige, the remains of the "casa dei trògheri" ("house of the porters") on Mount Valpiana, which hosted the prisoners who served to supply the front at high altitude. Many other places have been lost with the passing of generations. In rare cases their presence is more recognisable, like near the Carè Alto shelter, at about 2,500 meters above sea level, where there is a wooden church built by Russian prisoners in 1917.

Equally significant traces are found in the diaries and memories, where prisoners are seen through the eyes of the local population, that tell of the difficult cohabitation in wartime. On the one hand, distrust and fear emerge for men who came from places often unknown and from distant cultures, deformed by war propaganda, desperately clinging to their own survival. The testimonies collected by historians – in the impressive pervasiveness of the memory of that presence – also convey humanity and compassion. Local people could recognise in this condition the sufferings of their own husbands or children imprisoned in Russia. "I have no enemies" answered a Red Cross nurse from Trento, Anna Menestrina, when ordered not to offer food to the prisoners, according to a passage from her diary reported by Diego Leoni.

The presence of those who came from afar and lived the war on the Alpine Front has re-emerged publicly on some occasions, especially in the case of those who shared the irredentist cause – like the members of the Czechoslovak legion – or anyway fell on the battlefields. And so, for example, walking through the Asiago plateau, near Malga Slapeur, one comes across the monument dedicated to the 2nd Regiment of Bosnia and Herzegovina of the Austro-Hungarian army. Since 1996, three plaques in Bosnian, Italian, and German commemorate the fallen for the conquest of the top of Mount Fior.

It is more complicated to shed light on "those under", those who did not die fighting, but of hardship and exploitation. Near Panchià, in Val di Fiemme, a landslide killed 55 "Russian" prisoners employed in the gravel pit in January 1917. A plaque commemorates that tragedy, but the victims are simply remembered as "workers": there is no mention of their condition of exploitation, let alone of their origin. In another village, Cavareno in Val di Non, it is said that after the war the inhabitants dedicated a monument to the Serbian and Russian prisoners who repaired the aqueduct, which was however destroyed during the Fascist era. 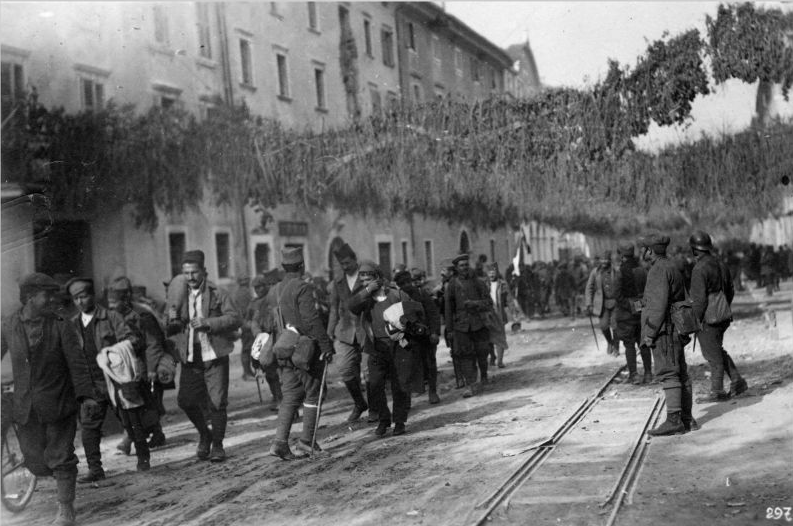 Yet, memory is often a political act, influenced by the commitment of multiple subjects, active at multiple levels. In recent years, the memory of Russian prisoners of war has been reaffirmed, especially in South Tyrol, by the action of the Borodina Russian Center in Merano. Lectures have been organised on the topic, and expeditions to places particularly significant for the Russian experience. The first public commemorations and religious ceremonies were held in Carè Alto and in some military cemeteries of South Tyrol, in the presence of local authorities, Russian representatives, and the Orthodox Church.

On the other hand, the memory of Serbian prisoners of war remains totally marginalised. Various testimonies convey a divergent perception already at the time of the conflict, with greater aversion towards them, perhaps linked to stereotypes and the idea that the Serbs could be considered guilty for the outbreak of war. Anyway, not even Serbian historiography – which has resumed the First World War after abandoning it in the socialist era – has devoted insights to this specific experience on the Alpine front. Research has instead focused on the large camps established in the rest of Austria-Hungary, where tens of thousands of Serb soldiers and civilians were interned, with a huge number of victims.

Now that the Centenary is over, the story of prisoners of war remains little integrated in the overall representation of the events of the First World War in this border region. An important exception is represented by the recent exhibition "What those eyes saw!", organised by Rovereto's History Lab which, while dwelling on the destinies of Trentino's men and women in the conflict, does not forget to give space to the Russians and Serbs dragged on the Alps. This is a useful page to understand the depth of the conflict and add a perspective outside the usual patterns: that of thousands of people arrived in the valleys of Trentino and South Tyrol after being uprooted from their homeland, carriers of different languages ​​and religions, exploited to support the war economy, separated from local communities, with which they developed a complex, but also very human relationship, died in anonymity and forgotten. A parallel, specular fate to that of many Trentino prisoners in Russia, which invites us to look at local events without losing sight of the transnational, European, and global dimension.

This publication has been produced within the project  NeverAgain: Teaching Transmission of Trauma and Remembrance through Experiential Learning, coordinated by the University of Turku (Centre Selma) and co-funded by the Europe for Citizens programme of the European Union. The contents of this publication are the sole responsibility of Osservatorio Balcani e Caucaso and can in no way be taken to reflect the views of the European Union.