European elections in Greece: the search for Ulysses 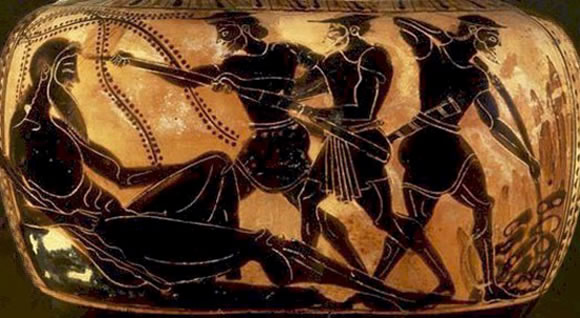 In Greece, European and local elections will be held together. Many voters are undecided and, according to polls, the new political formation To Potami (The River) is on the rise

His name? Nobody. Nobody will be the next Greek prime minister, judging by the increasingly frequent polls that accompany the approaching of May's European elections, which in Greece will be held together with the local ones.

Asked "Who do you see as the most suitable next prime minister, if you were to vote now for the general elections?", less than 44% of Greeks chose either Antonis Samaras (the current prime minister) or Alexis Tsipras, leader of the radical left Syriza. Tsipras, who is gathering support even outside Greece as candidate for president of the European Commission, confirmed his stance in favour of keeping Greece in the Euro-zone, but fighting for a "European Union of the peoples, not of the banks".

The majority of the Greeks, however, would vote nobody. But right now, in today's devastated Hellas, no cunning Odysseus navigates the Aegean sea to slay the monsters who, like Polyphemus, haunt the sleep of the Greek electorate – the Troika. The representatives of the International Monetary Fund, the European Union, and the European Central Bank, are the ones who have virtually taken over the country. With no Ulysses in sight, then, the answer of the electorate is just about despair and disillusionment. 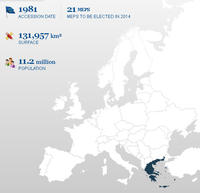 All you need to know on European elections in Greece

No one, in fact, seems to be able to rescue Greece from the dreadful Scylla of public debt and cuts imposed by Brussels and from the Charybdis of unemployment and popular discontent.

The two major parties, New Democracy and Syriza, have been running head to head for months. According to the most recent test on voting intentions, administered by company Alco and published by the newspaper Proto Thema on Sunday, March 30th, today the centre-right New Democracy would win by a whisker with 21.7%, closely followed by Tsipras' left with 21.2%.

A new political formation, led by popular television journalist Stavros Theodorakis, is likely to displace the odds of this election – "To Potami" ("The River") is estimated at 9.4%. Theodorakis, however, made it clear he does not want to be a candidate for the EU Parliament in Brussels, to accept politicians in his list (artists abound), or to run for local elections.

His dream for Europe? That of director Wim Wenders: "The Europe I dreamed of as a child has no relationship with today's Europe of cold bureaucracy". Theodorakis refused to join one of the MEPs groups: "We will see from time to time what the proposals of each group are on youth employment and youth entrepreneurship, which should be encouraged by the European Union. Finally, what they will propose to reduce the gap between northern and southern countries". One thing is certain: The River will draw precious votes among the many undecided, about 13% of the Greek electorate, who will be decisive in the contest between the centre-right and Tsipras' new left.

Following, in the latest polls, we find the neo-Nazi party Golden Dawn with nearly 8,2%, despite its leaders ending up in jail, accused of a series of murders of immigrants and of the cold-blooded killing of anti-fascist rapper Pavlos Fyssas last September.

The socialists of PASOK, currently in government with New Democracy under the shade of The Olive Tree ("Elijah"), stop at 5.5% and are probably paying the price for carrying out the diktat of the Troika, which Tsipras no longer wants to accept.

Syriza, at least according to the polls, does not seem to be heading for the big win. In the mid-March Gallup survey, 21% of the electorate opted for Tsipras, while 20% chose the centre-right. The new-born River was already the third force in the country with 9%.

Some analysts speculate that the River, with its undefined positions and anti-political tendencies, may be born just to cut Syriza's legs. "The fact that The River has gathered consensus before even disclosing a specific plan on how to tackle the economic crisis reveals the irritation of a wide audience of citizens, who seeks a channel to protest against traditional politics", writes the newspaper Eleftherotypia in an editorial last April 1st. "Will such consent persist even without a clear anti-crisis roadmap? Where is Theodorakis aiming – just to collect the pure protest vote?".

Actually, Eleftherotypia continues, "The creation of this new party is not painless from the political point of view. The first polls already showed that, since its inception, the presence of the River strengthens those in favour of following the imposition of the Troika, taking votes from those who are opposed to new international loans". In May the judgement.

On the local elections front, instead, the latest polls seem to confirm the re-election of the incumbent mayors in the two major Greek cities – George Kaminis in Athens and Yannis Boutaris in Thessaloniki. The two have one thing in common: in 2010, in their campaign for their first term, they both presented themselves as independent from the main political parties.

George Kaminis, for example, has chosen for the councillor positions personalities from the most varied political affiliations, but "who have something important to offer to the city". Prospective councillors include professor of contemporary history Thanos Veremis (who in the past, before the economic crisis, was Ministry of Education with both the centre-right and the centre-left) and internationally famous mystery writer Petros Markaris, who has set in Athens almost all of the adventures of his investigator Charitos.