Trains are not only good for the environment 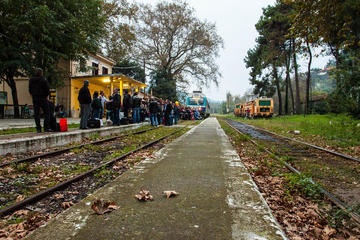 Train transport is generating more and more interest and investments, aimed at cutting CO2 emissions of the transport section. But the improvement of passenger rail services also comes with a significant social and political dimension

This piece was originally published by n-ost's newsletter . Like OBC Transeuropa, n-ost is an organization focusing on the eastern side of the continent and promoting transnational reporting and crossborder collaborations in Europe.

The new wave of climate policies in Europe is finally about to vindicate train lovers like me. Over the past 20 years, the boom in low-cost flights sadly implied a decline in long-distance train connections, including night trains.

The tide is now turning for environmental reasons – but it shouldn’t be just about the climate, we should also notice the social and political relevance of having dense and quality passenger train connections in Europe.

Planes directly connect ends to ends – typically large cities – by literally jumping over all that is between them. On the contrary, trains make their way through a variety of territories, stopping through a good deal of small-to-medium centres, and serving communities that keep rural, mountain, and border areas alive.

We could argue that the number of train links available to a certain region is a good indicator of its degree of integration in the continent’s fabric. Train connections are important in order not to leave disadvantaged or peripheral cities and countries behind, a key challenge for today’s Europe.

There are countries in Europe that have little or no direct train connection to abroad – and even when they do, it’s typically a slow and expensive one. Just ask people in southeast Europe: for most of them, train travel simply isn’t an option. In some cases, even capital cities in the region like Athens, Tirana, or Sarajevo lack direct international train links.

Given the social and political relevance of passenger train connections in Europe, public money should support their coverage of peripheral countries and regions. Companies and governments should do their part, but it’s crucial that the EU seriously invests in this field: dense and quality connections cannot only cover core Europe and a bunch of large cities, but they must be within reach of all European citizens no matter where they live.