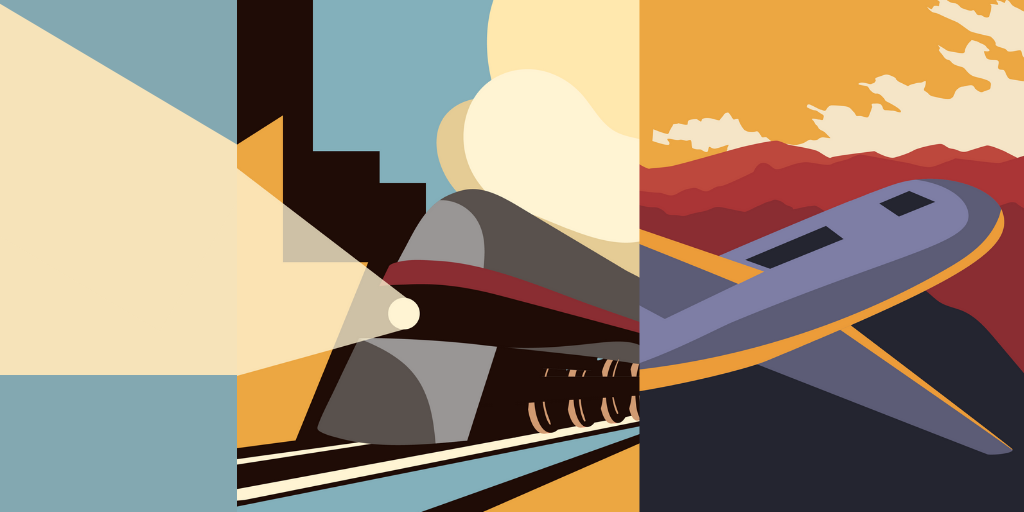 Currently, trains offer a reasonable alternative to around half of the most popular short-haul flights in Europe. Additional improvements and incentives could bring further reductions in CO2 emissions from transport.

We collected data on the durations of current rail connections and those from 2019, prior to the Covid-19 pandemic. We also collected data on the routes, number of transfers, and distances traveled by trains. We excluded routes corresponding to air routes over 1500 km, and routes to islands unreachable by train, such as Ireland or the Canary Islands; some of these are extremely busy however. More details can be found in our report .

There's one rather simple way Europeans could lower their CO2 emissions: favour the train instead of the plane when travelling within the continent, and make it easier and cheaper for people to do it. Europe's rail network is dense, and relatively fast in many countries, and it already offers a reasonable alternative to about half of the most popular short-haul air routes.

Apart from island destinations unreachable by rail, a study we carried out for Greenpeace shows that for 34 percent of the 150 busiest air routes within the European Union there is a rail alternative that takes less than six hours. About a quarter of the routes that take more than six hours are covered by direct night trains or take less than 12 hours. Looking beyond EU borders, similar percentages apply to the 250 busiest air routes in Europe which, at least theoretically, have a rail alternative.

If passengers actually started using trains instead of planes for these journeys, 54 million fewer people would travel by plane each year, saving 3.5 million tonnes of CO2. This is roughly equivalent to the carbon emissions produced for the yearly energy consumption of 2.3 million households. 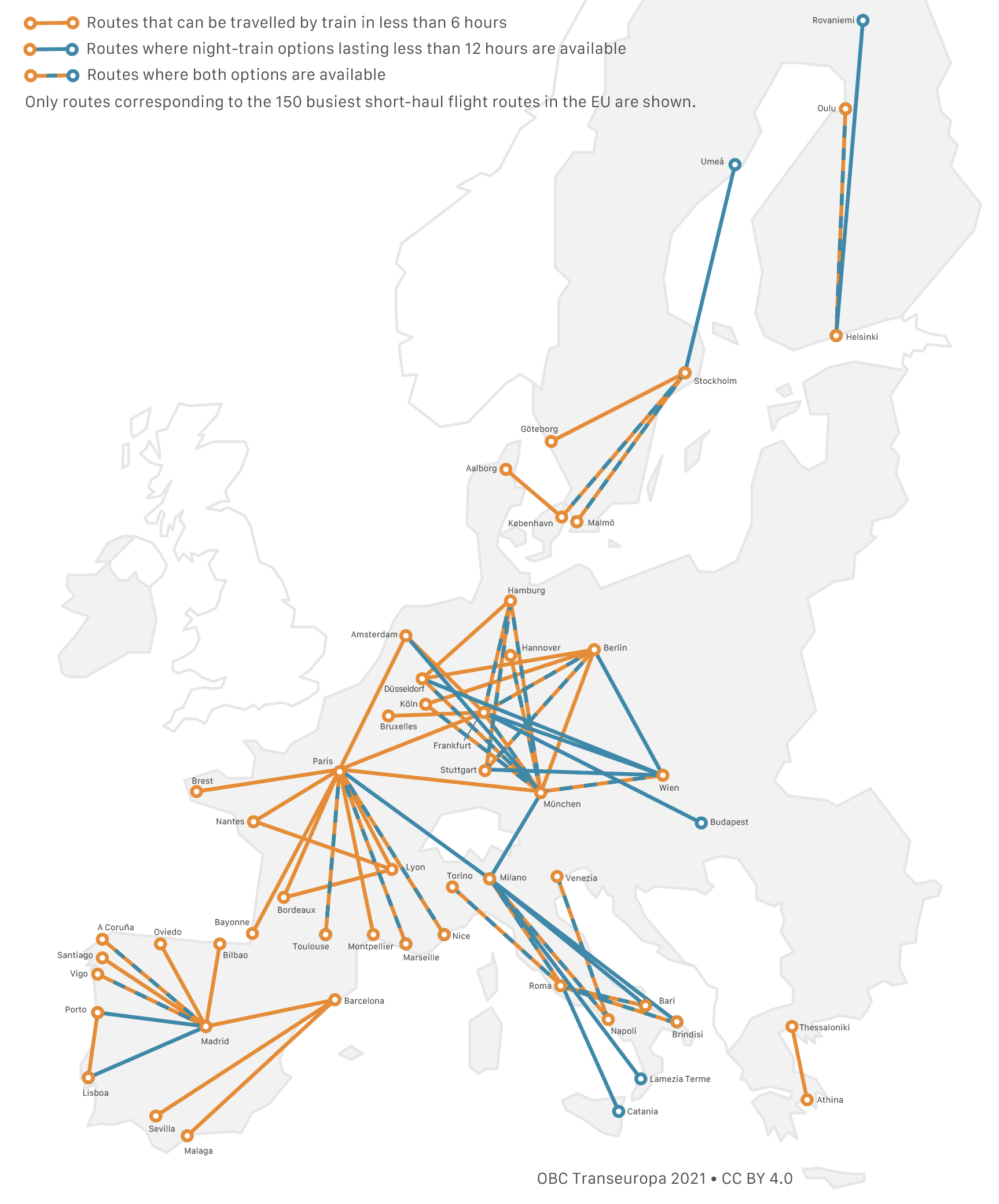 Tracking the duration, itinerary and distance of possible rail alternatives to the most popular flights, it emerges that rail could be competitive indeed on many routes – especially when critical connections and hubs were improved. For 84 percent of the flights considered, it is possible to travel the same route by train within a day, even for seemingly long-distance routes such as Amsterdam-Madrid, Rome-Brussels or Paris-Warsaw. In 82 percent of cases, there are direct trains between the city of departure and the destination, or just one or two changes are required.

Of course, there are also cases where the train will never be a reasonable alternative, unless travellers opt for a ferry to cover part of their journey. In addition to most European islands, this is also the case for cities separated by sea, such as Rome and Athens, or Helsinki and Stockholm.

What improvements are needed

While in some cases trains are already, at least theoretically, competitive with air trips, several railway connections within Europe could definitely be improved.

For example, there is a direct train between Vienna and Bucharest, but it travels at an average of 55 km/h and takes over 19 hours to reach its destination. In other cases, waiting times at intermediate stations lengthen the journey disproportionately: Milan and Vienna are relatively close, but day travellers have to change train four times during a morning trip - the same applies to the route from Amsterdam to Copenhagen.

Infrastructure improvements, or even the simple introduction of new connections on the existing network and better scheduling of timetables, an additional share of railway connections could become competitive with the corresponding air routes.

Strategic railway lines and hubs are particularly important. For example, a large number of alternatives to the main internal EU air routes run via the Paris-Barcelona line. Yet before the pandemic there were only three direct trains per day between the two cities – now reduced to two – and no direct night trains. In some cases it is necessary to pass by Paris in order to reach Italy from Spain, or Spain from Germany, only because existing rail connections in the Alpine region are poorly served. For example, good connections between Marseille and Milan or Lyon and Basel could prove very valuable.

Trains are already a clear alternative to airplanes on many domestic routes, at least in the countries with fast rail networks. However, international connections  remain weak, relying on just a few lines, and often offering only a few trains per day.

Another weakness are night trains, which would allow rail to compete with aircraft on longer routes. There are only a handful of night trains that connect EU countries, and with the outbreak of the pandemic, some of the most important routes, such as Venice-Milan-Paris, have been discontinued.

Finally, it is likely that at least some of the people who fly between two nearby cities well connected by trains, actually do so in order to catch another flight. In order to offer a real alternative to these passengers, it is not enough to have decent rail connections between the two cities: we also need direct or fast connections with major airports, something that is currently rare in Europe.

Over the next few years more and more trains will offer, at least on paper, a good alternative to European air travel, thanks to the introduction of new international night trains and the completion of some major improvements on the network, such as the Brenner Base Tunnel.

However, additional measures will be required to ensure that passenger traffic really does make the transition, and that transport-related CO2 emissions are reduced accordingly. One possible measure is the cancellation of short-haul flights, which is under discussion in France , Austria and Belgium. Greenpeace, for example, is asking the European Union to ban air routes for which a train alternative that takes less than 6 hours exists.

However, action is also required on prices, which are a critical factor in guiding passengers' behavior. On the one hand, authorities could subsidize rail transport and encourage competition between operators, and on the other hand they could increase taxation on air transport.