Zagreb is ours, a movement on the side of citizens 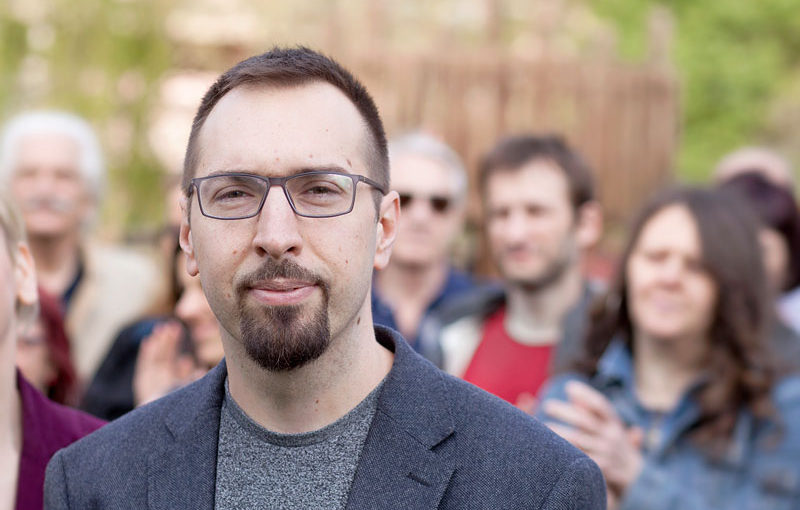 Tomislav Tomašević, 38, is the leader of the movement Zagreb je naš ("Zagreb is ours"). An activist, political scientist, and environmentalist, Tomašević represents to date the most dynamic opposition to Zagreb's unremovable mayor Milan Bandić. We met him

Activist, political scientist, and environmentalist, Tomislav Tomašević is the leader of the movement Zagreb je naš ("Zagreb is ours"), which won almost 8% of votes in May 2017, just a few months after its foundation. Tomašević, 38, then joined the city council with four councilors and today represents the most dynamic opposition to Milan Bandić's decade-long rule. Tomašević blames the current mayor – an ex-social democrat who became an independent, but is now supported by the extreme right – for the corruption, the misuse of public spaces, and the lack of attention to ecology.

Zagreb je naš is only the latest movement attempting to undermine the rule of Zagreb's evergreen mayor, who has been in charge almost uninterruptedly for 18 years. How do you explain the Milan Bandić phenomenon?

Most of the parties that are now in the city council (and have been for a while) have leaders that are employed in some institution or public company. I cannot imagine how anyone can, on the one hand, be an employee of the mayor in a municipal company and, on the other, be critical of or oppose him. This simply does not work. Then, there is the question of so-called "social transfers". The opposition (Social-Democrat, ed.) accuses the mayor of "buying voters", for example when he builds a new sewage system in a suburb of Zagreb. For me, this does not mean buying voters. In fact, every mayor should build infrastructure for their citizens. But the problem remains: the opposition continues to define Bandić's social sensitivity (or fake social sensibility) as buying voters. And it is clear that, in such a context, citizens say: "If I vote for someone else, I will pay more for public transport or for services and no sewage will be built, because the opposition political elites do not care about these things". Our philosophy, in this regard, is different. We would like to expand the sewage system, or make public transport cheaper, but we would like to do it without a third of the money ending up in someone's pocket.

In addition to a populist approach to city management, the Bandić system is now also based on the support of the extreme right, the Independence Party for Croatia (Neovisni za Hrvatsku), founded by former Minister of Culture Zlatko Hasanbegović. What is their role in the municipal council?

They are not interested in the problems of citizens or public services, they are not interested in services or the needs of the community, they almost never discuss in council. For example, Ana Lederer, who is responsible for the cultural sector, has not intervened in council for a year. Neovisni za Hrvatsku has changed position three times in two weeks. On the waste management plan, first they opposed it, then they accepted it. On the reform of Dinamo Zagreb (the capital's football team, ed.), they did the same. The aim was to transform Dinamo from an association of citizens to a sports club with the aim of democratising its management. Neovisni za Hrvatsku first accepted our amendments, then changed their mind.

It was this party that imposed on the city of Zagreb one of the best-known and controversial changes: the renaming of Marshal Tito Square to Square of the Croatian Republic. Why?

Because they use the municipal council to manage a cultural war. They do not care about the needs of the citizens of Zagreb, for them local power is just a stage for a broader cultural war. Today, we can very well expect that all those who do not think like them will be expelled from Zagreb's cultural institutions. It is already clear that they will censor cultural content and influence theatres' activity. We will continue to oppose this strongly, but we do not want to be "dragged" into discussions about street names and squares. We want to continue to take care of the problems that really worry people.

One of these problems – you just mentioned it – is waste management. What happens in Zagreb in this area?

In 2015, the European Commission published a report stating that, of all the capitals of the European Union, Zagreb is the worst off in terms of separate waste collection. Waste is a good example of what does not work in the city and how things are done here. The Jakuševac landfill, the largest mountain south of the Sava, is a kind of monument to twenty years of ignoring the problem of waste. When we throw waste in this landfill, it's like we're throwing money! The municipality could sell these resources and finance the infrastructure that we lack, social institutions, kindergartens... We calculated that every year we waste 150 million kuna (20 million Euros, ed.) in Jakuševac – a sum that would be enough to build 8 or 9 new kindergartens every year.

Mayor Bandić has repeatedly proposed to privatise waste management. Would this be a solution?

No, in 2014, when they proposed to privatise Čistoća, the municipal company that deals with the huge business of collecting undifferentiated municipal waste, we – the social movements and the trade unions – opposed it, and in the end the privatisation was not done. But this hypothesis continues to be evoked today: it is one of the first services that they would like to privatise. The fact is that, as happened with the privatisation of water services, also in this case privatisation would lead to an increase in costs for users, a deterioration in the quality of service, and less investment in infrastructure. This does not mean that now these services are managed in an optimal way – rather, municipal companies are managed in an irrational way, they employ members of the parties, public contracts are entrusted to private companies that then finance electoral campaigns... In short, it is a vicious circle, but we would like to improve it by changing the way of managing public companies, not by privatising them.

In the specific case of waste management, what could be an acceptable solution in Zagreb?

First of all, undifferentiated waste should be collected and charged by the amount produced, whether by volume or weight. The mayor announced a new collection and payment system in May, but I do not think it will be operational before the end of the year. And even with this new system – it seems – the exact amount will not be charged. For example, in the case of a bin of, say, 240 litres for a building with ten apartments, each apartment will pay the same amount, i.e. the fee for 24 litres, no matter how much waste it has produced. If, on the other hand, the exact cost of the waste produced is charged, this will stimulate people to recycle or produce compost as much as possible.

On the other hand, we have at least managed to avert the plan to build an incinerator, which is one of the projects we have been fighting against for 15 years and which the mayor wanted to introduce. It is an obsolete idea, a technology that more and more countries are abandoning in favour of recycling and composting. When we burn waste, we always get less energy than when we recycle, that is when the raw materials are reused. The burner is the most expensive option, and harmful for the environment. Today, all the parties in the city council are against the incinerator and the project has even been removed from the regulatory plan.

Then there is the question of the use of public spaces. Every Wednesday, many citizens meet to protest the ongoing works in Victims of Fascism Square and the Mestrović Pavilion, one of the most important monuments in Zagreb. What is the meaning of this protest?

The Victims of Fascism Square (Trg žrtava fašizma) is one of Zagreb's "postcards", because when we think of the Croatian capital, the Mestrović pavilion is certainly among the 5 or 6 images that come to mind. Today's is a symbolic battle, which shows how the city manages public space. The works started without any architectural-urban competition, even if it is a central square of the city. Furthermore, there was no consultation with the representatives of the district, even if the Zagreb Statute prescribes it. There has been no public discussion, although there is a great deal of public interest (as demonstrated by the mobilisation of citizens).

We brought this theme to the city council, and, for the first time, they simply removed the topic from the agenda. They, of course, may not vote in favour of our request to suspend works until there is a public hearing, but it never happened that they did not even allow us to discuss it. And this speaks volumes about their management of the city and their ability to discuss.

The works in Victims of Fascism Square are just the latest example of the struggle for public space in Zagreb. There have been many other cases...

True, there is continuity since the events in Warsaw Street (Varšavska ulica) and in Flower Square (Cvjetni trg). Even there it was a struggle to maintain control on the public space. The battles for Warsaw Street and the Flower Square represented the biggest civil disobedience in Zagreb: 150 demonstrators were arrested in a single day and these demonstrations also spread to other districts outside the city centre.

Last year, there was the protest for the Savica park, which did not take place in the city centre, but in one of the suburbs. In Savica, the situation is not yet clear, but Bandić's project – building a church – will not be implemented, and the inhabitants will be able to keep their park. And this battle has inspired other civic initiatives.

To oppose Milan Bandić, a veteran of Croatian politics, you also need an effective communication strategy. How do you talk to citizens?

I attend all the Wednesday protests in Victims of Fascism Square. It's like a regular meeting with citizens: I stay two hours, people question me, give me suggestions, tell me their problems... Then, we are present at all public meetings and we communicate directly with citizens. This is what we did during the election campaign too. My cell phone number is on the municipal website, citizens call me directly to tell me about their problems, they write me emails, and then we try to resolve every issue within Zagreb je naš.

In the movement there are university professors and workers, educators in kindergartens and nursery schools and activists, people who work in culture and leaders in civic initiatives. We try to be accessible to all social classes, and if you look at the topics we are dealing with, for example, citizens whose bank accounts are blocked, unpaid workers... you see that these are real social problems. In short, we want to address the problems affecting the poorest and most vulnerable groups of citizens. And we also have this approach in dealing with ecological issues. It is ecologically unfair to set up waste treatment facilities in the suburbs, where the poorest citizens live. If Pantovčak (the street where the Croatian president lives, ed.) stank as much as Jakuševac does, how long would it take for an intervention by the municipality?

Milan Bandić gets the majority in the elections because no opposition has ever really faced people's problems. We want to do it.