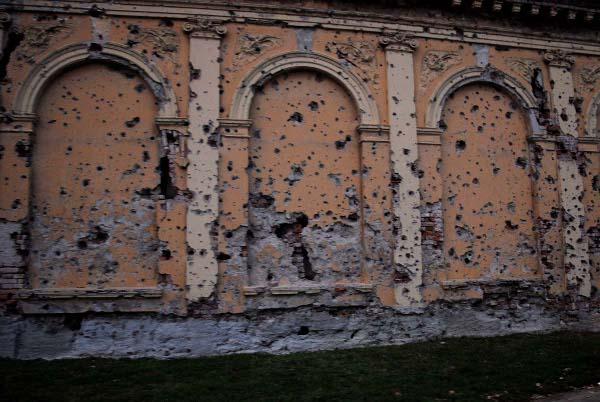 On 18 November 1991, the siege of Vukovar, Croatia, ended with an agreement between besiegers and besieged to evacuate civilians and respect the Third Geneva Convention on treatment of prisoners of war. Neither promise would be kept. Our report on the memorial day

Walking in today's Vukovar is like walking on a runway. Mortuary candles burn on both sides of the sidewalks and in the squares, outside windows, and at the feet of statues and trees. There are dozens of different flags: white, red, and blue flags with the chequered coat of arms, the flags of Vukovar, flags of municipalities and counties, and the banners of ex-soldiers associations and civilians victims of wars.

The town is bursting with people; mothers with strollers, soldiers, special police corps, and dignified men in suits that hint at their important roles. There are nuns and priests, men and women of all ages, students arriving from all over the country on buses, and children everywhere, each of them with a single red rose in hand. All of Croatia seems to be here today, 19 years after the siege of Vukovar. People have come to commemorate the victims of the siege, the following deportations, and the killings of civilians and war prisoners. According to estimates, there are 15 to 20 thousand attendees walking the 6-kilometres procession from the hospital to the “Memorial of Victims of the Patriotic War”.

In 2006, over a decade after the war, a Serbian-Croatian team co-produced the first documentary on Vukovar. The documentary, "Vukovar – final act" , is directed by Croatian journalist Drago Hedl and Serbian director Janko Baljak and is part of the project "Independents for the Truth", a project that produced ten documentaries about the war crimes of the nineties.

Read about the film on RadioB92 (producer)

Vukovar, 24 August – 18 November, 1991. Eighty-seven days of siege by the Yugoslav People's Army (JNA) – that suffered many desertions during the siege – and the Chetnik paramilitary troops who remained in their positions: the Tigers of Zeljko Raznjatović, a.k.a Arkan and the White Eagles of Vojslav Seselj. Inside the town were the Croatian forces, including also men of HOS (Hrvatske Obrambene Snage – the military wing of Dobroslav Paraga's nationalist party HSP, led by colonel Mile Dedaković aka Hawk (Jastreb). Both sides agreed to end the hostilities. Besiegers promised that civilians would be free to go and that prisoners would be treated according to the Third Geneva Convention.

On 18 November, 300 people were evacuated – the sick, injured, and pregnant women. They were put on buses and taken out of town to be eliminated in Ovčara, near the area of the Vupik farm. Soldiers gave up their arms and were transported, together with hundreds of civilians, to another region. They were tortured. Many of them were killed. Five hundred bodies are still missing.

This year's commemoration was titled “Vukovar – Winner as a Victim”. But judging from their eyes, people do not look like winners. There is a sharp contrast between the proud marching soldiers, the flags and banners of State and church waving with national pride, and the dense pain and stunned silence enveloping the crowd. Nothing seems to have changed in 19 years: the “winner” symbols of nation, honour, and religion still keep individual lives under their heels.

Those who survived the siege are the losers. Croatian citizens were evacuated before the siege. The others ran, scared by Milosević's extremism or Croatian nationalists' threats. They were women and men, children and elders – now they are buried under the ground.

"Vukovar was great in its being victim, but was also able to forgive", states President Ivo Josipović while walking in commemoration walk. He tries to connect the acknowledgement of the citizens' pain with the need for reconciliation. Premier Jadranka Kosor confirms that Croatia needs to look at the future without forgetting the victims: "We must not forget the 1,700 people – soldiers and civilians – who died in 1991, the 4,000 who were injured, and the 500 who disappeared. The memory of them must force us to look at the future of our country on the basis of justice and equity".

According to official sources, the flags of Serb parties and associations of Croatia are absent. Not far from the centre city at the Serb military cemetery, wreaths are being laid in memory of military and civilian victims of 1991. The commemoration has been organised by the Serb minority of Vukovar's municipal council and is attended by spokespersons of Serbian parties of Croatia and around 60 relatives of victims.

Only a few days ago, Serbian president Boris Tadić visited Ovcara and apologised. The event divided Vukovar's citizens. For some it was a good start, for others not nearly enough. A lady, red in the face, says curtly: “I will never forgive until justice is done!”

Vukovar's "trojka" (JNA officials Mrkšić, Šljivančanin, and Radić) – responsible for the massacre of over 200 Croatian prisoners – was incriminated. Croatian general Ante Gotovina, indicted for war crimes together with two other Croatian generals (Mladen Markač and Ivan Čermak), is awaiting sentencing. In Vukovar, someone has posted a giant picture of Gotovina that reads “I too am with you”. But his picture has been defaced with spray paint and pencil marks.

After the speeches, the laying of wreaths under the monument called “the cross of the wind”, and the mass, most people leave the memorial site. Groups of soldiers and relatives remain in front of the graves of hrvastki branitelji (Croatian fighters). The protocol officer tells a group of soldiers about the structure of the memorial site: there is an area with black tombstones for soldiers who died in battle or from injuries, one with white tombstones for soldiers' relatives, and one with simple white crosses for civilians. The fourth area is littered with nameless tombstones and open holes – graves waiting for the remains of the 500 bodies that are still missing.

There is a girl in a light-coloured coat, she must be about eight years old. She is clinging to a bag that has slipped from a squatting woman's shoulder.  Bending deeply, the woman lays a red rose at the foot of a white cross and sobs desperately. The cross is one of 938 that mark the graves of civilians.  The tidy rows of crosses cover a bright green field and are divided in the middle by a small path. At the end of the meadow, two crosses were laid separate from the group: one for the youngest victim (six months) and one for the oldest (104).

The protocol officer says: “They are more in view in order to represent a century of history”. In the last hundred years, there have been two world wars, “patriotic” wars and “ethnic” struggles. In 2006, while interviewing the designer of the Jasenovac memorial Bogdan Bogdanović, OBC asked him to describe his next monument.  He said, “no, it's enough. My dream is that there will be a time when such a monument is no longer needed”.

Darkness falls. TV journalists wander the squares with their cameras. Families and groups walk between the vendors’ stalls selling chequered rosettes, holy cards, “Vukovar doves”, and miniature ruins. All around stand the ruins of buildings destroyed by bullets, pavement marked by the radial imprints of bombshells, forests littered with mines. People go home or sit at restaurants on the Danube. The river flows slowly, silently witnessing today just as it did yesterday.