Croatia: the return of the Pelješac bridge 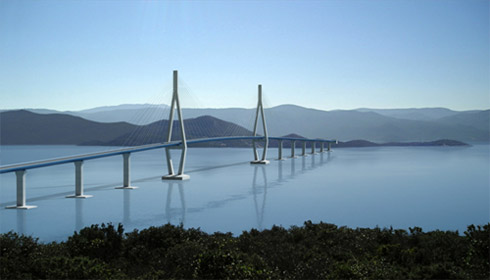 Rendering for the Pelješac bridge project

Caught in the grip of economic crisis, Croatia is desperate for investments. So much that the centre-left government is reconsidering the long-opposed Pelješac bridge

Croatia's external debt rose to 47.4 billion Euros at the end of June, the figure for unemployment reached 294,877 (17.3%), and the European Bank for Reconstruction and Development has recently lowered its growth estimates for the Croatian economy, forecasting that in 2012 the GDP will fall by 1.2%. This is the picture of the economic situation in a country that is to join the EU in less than a year (July 1st, 2013).

Even Finance Minister Slavko Linić, who has been optimistic since the beginning of his mandate and even announced a 0.8% GDP growth for 2012, now recognises that the announced investment cycle is delayed and that Croatia will be lucky if it closes the year with a growth rate of zero. For the first time since it came to power last December, the centre-left government led by Zoran Milanović has officially announced – through the Minister of Finance – that Croatia may ask for the help of the International Monetary Fund.

"We can only pay our debt with new debts. If our rating were downgraded, the IMF could be our ally in the negotiations on commitments", stated Linić.

The Minister of Finance said this when his colleague Mirando Mrsić, Minister of Labour, was engaged in tough negotiations with public sector unions on the reduction of some collective agreement rights. The state, they say, no longer has money for the Christmas-bonus and fourteenth-month salaries, seniority advancements, and pay-offs. The Unions will not give up and threaten to strike and take people to the streets.

The government insists there is just no money and suggests it would be wiser to give up on some rights than having salaries cut. The Minister of Finance's announcement on the possible help by the IMF, however, is interpreted by some as a kind of threat – if the IMF comes, we may indeed have to cut the salaries.

In March, Croatia increased VAT by two percent (from 23% to 25%), but even this unpopular decision, which further worsened the situation of the poorest citizens, has failed to improve the state's financial situation. An estate tax could be introduced in the Autumn, and the Minister of Finance announced a tax on weapons too. Economic analysts warn that raising taxes and introducing new ones will not solve the problem. The recovery, they say, will come from more jobs, more production, and more exports. But on this front, unfortunately, things are not moving an inch.

The return of the Pelješac bridge project

Aware of the serious lack of investments that could improve the country's economic situation, Milanović's government has unexpectedly revived the project of the Pelješac bridge, a project it had strongly opposed. With its 2,400 metres in length, the bridge should link the coast with the Pelješac peninsula, thus joining the two ends of the Croatian coast which, in the town of Neum, are interrupted by Bosnia and Herzegovina for about twenty kilometres.

For Bosnia and Herzegovina those twenty kilometres are the only outlet to the Adriatic Sea, but for Croatia they are a big problem, especially during the tourist season. Travellers who want to continue from Split on the Croatian coast to the South East are forced to pass through Bosnia and Herzegovina. With the construction of the bridge this problem would be solved, as the road would go along the Pelješac peninsula to the mainland near Dubrovnik.

The Pelješac bridge is an old idea: it first came up in 2007 as the winning card in the HDZ (Croatian Democratic Union)'s election campaign to attract voters in the far south of Croatia. However, the construction of the bridge, estimated at a cost of 265 million Euro, was blocked after the elections. The HDZ resumed the idea once again at last year's elections which it lost. The opposition – now in government gathered around the SDP (Social Democratic Party) – had fought hard against this project, stating that the bridge was too expensive and not worth the investment, adding that there are cheaper solutions such as ferries.

Last May, Zoran Milanović's government officially terminated the construction contracts, but only two months later it begun to seriously reconsider the project. The idea was brought forward by Foreign Minister Vesna Pusić, who thinks most of the costs (about 85%) could be financed by EU funds.

Radimir Čačić, vice premier and Minister of the Economy, has announced major investments in the energy sector. Works should soon begin for the construction of the third block of the Plomin thermal plant in Istria. This would be the biggest investment in Croatia, worth 800 million Euro. Recently Croatia, has made agreements with Republika Srpska for the construction of the Dubrovnik 2 hydro-electric plant, worth 170 million Euro. Soon the modernisation of Zagreb airport should also get under way with the French consortium Bouygues Batiment International and Aéroports de Paris Management getting a thirty-year concession and making an investment of 230 million Euro.

Next year, should all these investments start, Croatia could finally emerge from the recession it has been going through for the past four years. The European Bank for Reconstruction and Development, which lowered its estimates on GDP growth a few days ago, expects that in 2013 Croatia might finally reach a turning point with a 1,5% growth, which would mean an exit from the crisis. Until then, however, the country just has to grit its teeth.