Drago Hedl: the journalist's craft, between threats and humiliations 20/09/2017 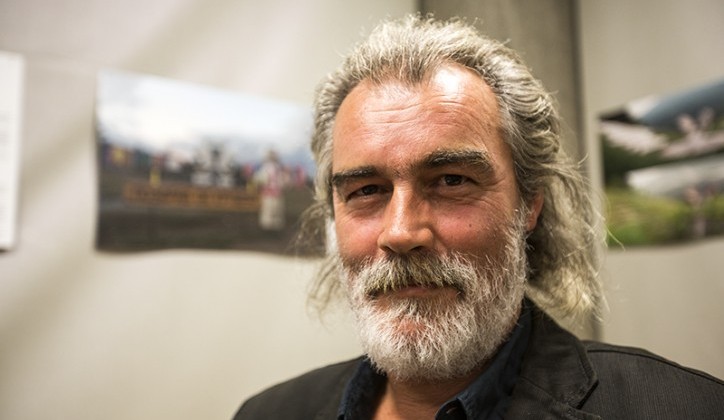 All-out interview with Viktor Ivančić, one of the founders of the legendary weekly Feral Tribune. The media in Croatia, the Balkans, and former Yugoslavia. The risks for democracy

A prominent journalist at the regional level, Viktor Ivančić is now a columnist for Novosti and Peščanik . Once, he was one of the pillars – along with Boris Dežulović and Predrag Lucić – of the legendary weekly Feral Tribune, the only beacon of free journalism in Croatia, opposed to the rampant nationalism of the nineties.

What is your opinion on the mainstream media in Croatia?

The mainstream media are usually unanimous on so-called national interests and cult pseudo-religious themes, such as the Patriotic War [as the war of the nineties is called in Croatia], the Croatian state, and more. In these situations they work scrupulously to create cohesion in the nationalist, stereotypical sense. You could almost say that the Croatian nation is a product of the media, because it coalesces under media input.

This article is part of a thematic series that OBC Transeuropa dedicates - in the context of the ECPMF project  - to journalistic initiatives that foster high-quality reporting, promoting and strengthening democratic values and fundamental rights in European societies.

On the other hand, our corporatist system puts marketing first – though this is not something exclusively Croatian. Unlike other sectors, journalism today does not live on what it produces, but thanks to marketing. You write a piece, but you actually live thanks to the advertising industry that sucks you into a web of loyalties – especially in those countries where the economy is closely linked to politics, as in Croatia.

So, journalism is headed towards slow-burn suicide and will hardly be saved. Professional, honest journalism – in the traditional sense of the word – is unlikely to resist the so-called free market in countries like Croatia.

What is the role of the non-profit media?

For years, there have been analyses and data on media freedom in the world, with countries like Finland, Denmark, or Norway consistently making the top of this list – countries that invest heavily in the independent media. On the other hand, countries like the United States, Croatia, Serbia and so on, invest little.

The citizens of countries where the independent media are supported by public funds have realised that they need to see honest, professional journalism as commons, because everyone should have the right to truthful, objective information, rather than being left entirely at the mercy of media manipulations and commercial aggression.

Will "commons" be a topic of discussion again, in the media or elsewhere?

I do not think that capitalism, particularly in its neoliberal form, will ever commit to commons and the public good. Capitalism has even perfected the ability to absorb its critiques into the status quo. The corporatist media are teeming with critical articles aimed at the improvement of the existing state, but so that the foundations of the system are never questioned.

If you do question the foundations of the system, you are immediately marginalised – which is one of the reasons why the radical right is much more present than the so-called radical left.

The radical right does not question the system, it gets along with capitalism just fine. The kind of left that would change radically the present system, on the other hand, is simply unbearable. In any case, I do not think – at least as far as I'm concerned – that we should put our efforts into improving the mass media. I'd rather fight for their subversion. Being at the margins is not that bad, except that it is difficult to survive.

For example, the position of non-mainstream media in Croatia is different than in Germany. I do not see the influence of the non-profit and non-mainstream media as proportional to their success with the public. Readability has nothing to do with the ability to stimulate readers. We often forget that people experience an ironic rejection of what they are reading and watching, and that authenticity is very important.

You may be less of a hit with the public, but still a major influence. I remember, for example, the situation in the late nineties, when the HDZ virtually controlled Croatia's whole media scene, except the Feral Tribune, Nacional, and Novi list, but still lost the election. So, we need not overestimate the power of the big corporatist media.

By the way, what role did the media play in the US presidential elections? Donald Trump managed to overcome Hillary Clinton despite the fact that most of the media were in favour of the latter – was it because the media have lost authenticity?

Over time, the media have compromised themselves too much, despite Trump further outraging them. The media industry is constantly working to its own discredit. Authoritarian regimes used to rely on political censorship, but now they use other techniques, first of all manipulation. There is no longer need to cancel the publication of some important or inconvenient piece of news – you just need to cloud it with nine other trivial pieces of news to blind the readers.

The fundamental function of the media is to make the audience passive. They want to convince the average person that there is nothing they can do to change their situation and their own destiny, let alone change the things around them or participate in decision-making.

They will convince them even that such obtuse impotence is their choice.

Do you not think that this new HDZ, under Andrej Plenković, has reformed into a more centrist party?

It's the same trick used by Ivo Sanader [former president of the HDZ and Prime Minister between 2003 and 2009, editor's note]. As soon as Sanader left the scene, the HDZ turned into a 'wild beast of nationalism' under the leadership of Tomislav Karamarko [president of the HDZ before Plenković, ed.].

So, the party has not been reformed – everyone knows that this is a rhetorical surface that does not change the political substance. I believe that this is a cynical game where everybody participates consciously in this cheat. And Plenković is an ideological non-entity. His discourse is empty, a sort of rhetorical automaton – you insert a coin and he grinds and grinds.

What do you think of the Social Democratic Party of Croatia, SDP, and its new president Davor Bernardić? Is there any chance of a turn to the left?

I do not have a high opinion of the SDP. This party has been a mess from the start, since Ivica Račan [former president of SDP and Prime Minister between 2000 and 2003, editor's note]. Today, Ivica Račan is idolised, they are trying to make him into a monument of the Croatian model politician. I believe that this is wrong and that the country suffered most of the damage during his rule, because of what he should have done and did not do.

Račan's government was supposed to clash with the nationalist matrix. The SDP has always thought it could inherit the same matrix and give it a human face. They built the illusion that there is a kind of "soft" nationalism that would be acceptable. This has always been the centre's problem – it is essentially nationalist, and the SDP nourished nationalism. For me this is a mistake, as there is no good nationalism.

But now there's this Bernardić, the poster child for opportunism – an ideological vacuum that can be filled with any content. He became leader driven mainly by his career aspirations, and will do anything to fulfil them.

Is there an erosion of democracy at the global level?

Yes, a process is being completed of professionalisation of democratic mechanisms – more and more often so-called technical governments are formed, the language of economy invades the space of politics. You would think that the ruling elites in most of the developed Western countries put up with parliamentary elections like they would do with hemorroides – as a necessary evil, a formality they need to go through. Plus, only players who are supposed to win can enter the game.

And if an unexpected digression happens, as in Greece, then disciplinary measures will be applied by force. The elections themselves are becoming almost meaningless. For example, Croatia's political elite is the worst thing that the Croatian people have ever managed to create, due to a negative selection that has lasted a quarter of a century.

Is conformism a characteristic of most people here? In 1980 they marched behind Tito, in the nineties they turned to nationalism.

I agree. Once, somewhere, I wrote that conversion is the only constant here. The real triumph of nationalism in this region was not secured by the vocal nationalists, but by the armies of people who so obediently and silently marched behind the flag. Opportunism is the fundamental political energy in this country.