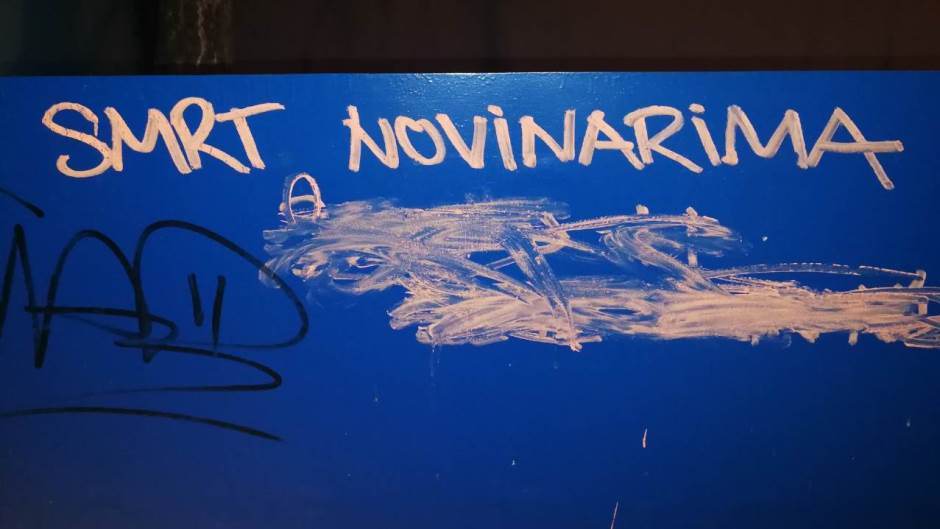 Minatory writings on walls, physical attacks, and threats. Reporters Without Borders expresses deep concern for what it sees as a real attack against journalists in Croatia

Too many attacks on journalists in Croatia and too much silence by the Zagreb authorities. With less than four months to go before the Croatian presidency of the European Union Council (the first ever for the 28th EU member state) starts, Reporters Without Borders publishes a statement expressing its concern about the state of freedom of expression in the young Balkan republic.

"Will the Croatian words 'Death to journalists' (Smrt novinarima) soon become commonplace in Croatia?". Thus begins the statement released Tuesday morning by Reporters Without Borders. The international organisation for the defense of freedom of information has witnessed in recent months a resurgence of attacks on journalists in Croatia and now reports "the deafening silence" of the Croatian government and head of state, that have been silent on these facts for months.

The phrase "Death to journalists" has appeared several times in recent weeks in various locations in Croatia. At the end of August, the Zadar News portal reported the presence of such graffiti in the centre of the Dalmatian city. A few months earlier, in March, the same threatening writing had appeared on a wall in Zagreb, a few steps from the editorial offices of the N1 regional TV and the Net.hr and Telegram.hr websites. Last weekend, a new case in Split, although this time the phrase is "journalists are worm" ("Novinari crvi").

The aim of these messages is always the same, writes Reporters Sans Frontières – "to attack, intimidate, and belittle journalists to dissuade them from carrying out their mission".

From words to deeds

The last few weeks have registered not only the appearance of threatening graffiti, but also actual physical attacks on reporters. The latest one was reported on Facebook by journalist Andrea Topić. Her car, parked outside her house, was hit by eggs during the night. Some time before, its tires had been punctured. "Perhaps it is a coincidence, perhaps it is not", Topić wrote on her profile, disclosing that she is currently working on some crime-related topics and has decided to publicly denounce the fact because "the police did nothing, even for the case of the tires".

In May, something even more serious had happened in Bleiburg (Austria). "While covering the pilgrimage of Croatian nationalists and neo-Nazis [...] Croatian journalist Daniel Majić was the victim of a physical attack by TV presenter Velimir Bujanec, close to the extreme right". His colleague Krsto Lazarević, who had chased Bujanec on this occasion to seek clarification, had also been verbally attacked, with homophobic insults. Then, as in all the other cases mentioned so far, the Croatian authorities remained silent, including head of state Kolinda Grabar-Kitarović, at whose inauguration ceremony Bujanec had been personally invited.

Moreover, the president herself was the recent protagonist of an unfortunate episode regarding freedom of expression. In mid-July, Grabar-Kitarović gave a very controversial interview on Swiss RTS television. While commenting on the situation on the Croatian-Bosnian border and the role of the Croatian police in managing the incoming migration flow, the head of state had admitted that "a bit of violence is necessary in carrying out pushbacks". The controversies that followed led Grabar-Kitarović to return to the subject. Accusing the Swiss reporters of misunderstanding her words, the president invited Croatian journalists "not to follow the foreign press that works for who knows what interests", but to present "also the Croatian version of the facts".

It is precisely this ambiguous behaviour by the leaders of the Croatian State that  Reporters Without Borders (RSF) now denounces in its missive. "The Croatian authorities must clearly condemn these practices and put an end to the unhealthy climate of impunity that reigns in the country and that represents a real danger for journalists", commented Pauline Adès-Mével, head of European Union and the Balkans at RSF. "Doing nothing – continued Adès-Mével – means giving a pass to people who threaten the press". Four months before the start of the EU presidency semester, it also means conveying the message that, at the EU level, freedom of information is not so important.

In the press freedom ranking that RSF draws up every year, Croatia is 64th out of 180 countries. Despite some recent improvements, which have seen Croatia free itself from the ultra-nationalist Orešković government (2016), the country does not yet have a stable and serene context for reporters, regularly subjected to ridicule and threats. According to Hrvoje Zovko, president of the association of Croatian journalists (HND), "from the Catholic Church to politicians, we register constant attacks on journalists, while the government remains silent". "In Croatia, it's open season on journalists", denounces Hrvoje Zovko.