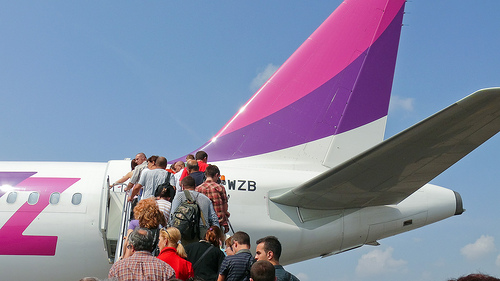 They make the most of electronic communication and low-cost flights. They live inbetween the “here” of their country of origin, and the “there” of the one they have chosen to work in. They use multiple identities. They are the “Euro-nomads”, a group on the constant rise, even in Bulgaria

Ivanka has been working in a private clinic in London for five years. Every two months, this energetic, 44 year-old Bulgarian takes the flight to Sofia where her husband Krasimir waits for her.

From the airport, Ivanka and Krasimir go to their native town of Stara Zagora in central Bulgaria, where they spend the week together. Their daughter Emanuela is about to graduate in Indian philology from Sofia University, and would like to continue her studies in London.

Ivanka has prepared a commuting plan for the whole of next year, based on the schedule of the low-cost flights connecting the British and the Bulgarian capitals. “My husband and I live apart for two or three months at a time but our marriage has not suffered. In the ten days we spend together in Bulgaria we don't have time to argue”, says Ivanka.

“My husband can't find a job in London and I don't want to loose a well-paid position. Since January 2007, when Bulgaria entered the European Union, my status as a worker in the UK has significantly improved, and today I have the same rights as my English colleagues on the labor market.”

Our conversation takes place via skype, the tool which allows Ivanka to stay in touch with her friends in Bulgaria and elsewhere. For the new “Euro-nomads” like Ivanka, it is precisely through electronic means of communication and low-cost flights that barriers which previously stood in the way have been overcome. 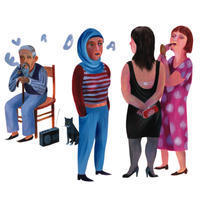 The “Euro-nomads” are modifying the features of the institution of marriage in Bulgaria into a form that the older generations find hard to accept.

Last year, Maria, a pensioner from Sofia, celebrated her seventieth birthday at her daughter's in Johannesburg, South Africa. Maria looks upon her son's marriage with a certain amount of skepticism: Nikolay, a 42 year- old doctor works in Paris, while his wife lives in Ruse, on the Danube, where she works as the manager of a textile plant. Every month Nikolay takes a flight to Bucharest (the capital of Romania, some 70 km away from Ruse) to spend a few days with his family.

According to ethnologist Margarita Karamihova, migrants have adopted the model of “double home”, divided between “here” (in Bulgaria) and “there” (abroad). The model is based on the opportunity of providing financial help to one's dearest and maintaining one's property in the place of origin through the revenues gained by working abroad.

Bulgarian “Euro-nomads” are not only part of the professional classes like Ivanka and Nikolay. They are also seasonal laborers, builders and agricultural workers, whose savings, sent via Western Union are essential for the family budget back at home.

The Return to Europe

The fall of communism coincided with an advancing globalisation process. Bulgarians who lived behind the iron curtain and could not travel freely, started to discover Europe and the world.

During the 90s, around one million Bulgarians left for the developed Western countries in search of a better life. In the following decade migration divided the Bulgarian population in two large groups.

On the one side are the new nomads whose numbers are constantly growing, who – not only in terms of students and qualified workers - try to develop their professional careers abroad and are constantly moving back and forth, using the opportunities created by globalisation.

This group also includes the non-qualified workers who do not have degrees, but have managed to find a niche in the market of many EU countries, mainly in construction, agriculture, and services. The families of these new nomads have been developing new models: spouses live separately, travel between Bulgaria and the countries they work in; their children study at the universities of Brussels, London, and Vienna.

Then, at the opposite end of the spectrum, is another group. It is that of the marginalised and those who are condemned to stay in a “local” dimension. Using the terminology of the sociologist Zigmunt Bauman, the latter live “under the burden of a constant excess of free time”, which they generally fill by watching soap-operas on TV.

This groups includes a large part of Bulgarian pensioners who find it difficult to travel even within their own country, confined to immobility by their miserable pensions which often range between 100 and 200 Euros, and thus hardly suffice for food and heating. The poor (many of whom belong to the Roma population) are also part of this group, who are hardly, or not at all, managing to benefit from Bulgaria’s entry into the EU.

Margarita Karamihova researches the processes of migration and the deifferent facets of the multiple identities of Bulgarian Muslims in the region of Satovcha since the wave of migration which hit this area after 1998.

The prime destinations of this wave of migrants were Spain, Portugal, Greece, Cyprus, Italy, and the United States. According to this ethnologist, each migrant usually has a “wallet” of identities, which are used depending on the situation.

Across the border, in other countries, they are perceived as Bulgarian citizens and they easily integrate with other Slavs from the Balkans. The migration process reinforces their Bulgarian identity, whereas their parallel one, the Turkish identity, is not activated.

The migrants in Western Europe who come from Satovcha make the most of being Bulgarians, i.e. citizens of a country which is a full member of the European Union, and at they same time they proudly declare their local identity.

According to Karamihova, the case of Satovcha demonstrates a “strong local identity which is disconnected from the migratory destination and whose real-virtual centre is the native village in Bulgaria, where the graves of the ancestors lie.”

According to the ethnologist Mila Maeva, Bulgarian Turks prefer to migrate to Germany, because of the large Turkish community there, which accepts them easily and helps them find work, given that they communicate in the same language. Good earning possibilities also influence the choice of destination.

Second to Germany, Turks from Bulgaria prefer Holland and Belgium. In Western Europe they work primarily in construction, farming, and (in Holland) in greenhouses.

Studying the choice of identity in this community, Maeva believes that in most cases Bulgarian Turks prefer to travel with passports which show their names in their Bulgarian version, due to the widespread bias against Muslims in the Western world.

In this case the work abroad reinforces the sense of belonging to the Turkish as well as to the practising Muslim community. Bulgarian Turks rank their ethnic and the religious identity, before their national (Bulgarian) and finally their European identity.

The freedom of movement in Europe hence gives Bulgarians different identity choices. Among all these identities in general, the supranational, European one is still the least rooted and most difficult to identify.

For those torn between Bulgaria and Europe, the local identity remains predictably the most visible one. For example, on the website of an organisation of Bulgarian migrants the following invitation to participate in a meeting in Madrid was pubblished last June.

“On the eve of 21st June, the longest day in the year, which in ancient times marked the celebration of fire of the god of the Sun, ancient Bulgarians gathered in sacred places to celebrate rites dedicated to the wellbeing and health of the people...we are convinced that in the Europe without borders of today, we Bulgarians must preserve our spiritual identity more than ever.”