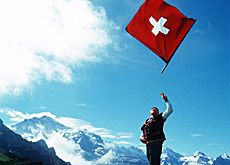 On 8 February 2009, Switzerland will decide by referendum whether or not to approve an agreement with the European Union which would extend to Bulgaria and Romania the right of free movement of persons through its territory. For the two Balkan countries, the vote, especially if negative, will test the strength of European solidarity

Two Balkan countries, Bulgaria and Romania, will play a decisive role in the definition of the future relations between Switzerland and the EU. On 8 February, Swiss voters will be called to decide by referendum whether or not to confirm a current agreement on the free movement of persons from the EU's most recent entrants.

The Swiss-EU agreement on free movement (signed in 1999) established that, two years after its official coming into force, the agreement would be submitted for public confirmation. It became fully operative in Switzerland in 2007 for the citizens of the fifteen "old" member countries, and now, two years later, the predetermined time for public voting has arrived.

In the meantime, the EU has expanded and Bern has had to negotiate with Brussels about the extension of the existing agreement, first to the ten 2004 entrants, and then to Romania and Bulgaria. For every draft law or governmental decree, just as for ratifications of international treaties (and the protocols that modify them), calling for a referendum in Switzerland is very simple: in a country of 7.2 million inhabitants, it's enough to collect 50,000 signatures.

The anti-European right and the extreme left - which consider free movement an attack on workers' rights - tried, unsuccessfully, to pursue this route in 2005 upon the extension of the agreement to the ten new member countries. Now they are trying again and, in the case of the isolationist right wing, are campaigning for a "yes" vote for the existing agreement (the effects of which have been relatively positive and, anyway, not catastrophic) but for a "no" vote for their extension to Romania and Bulgaria.

Those backing a "yes" vote point out that this would create an impractical distinction: the EU would never accept discrimination between its members just as Switzerland wouldn't accept discrimination between its own cantons. While the federal government has made efforts to produce a "double yes" vote - which is also backed by the cantons, many political parties, a large share of the economic world and the trade unions - according to the ultimate surveys, the "double yes" leads, but by only a small margin. In other words, the final result remains unpredictable.

Victory of a "no" vote is practically certain in Canton Ticino where unemployment is among the highest in Switzerland and salary differences with the neighbouring country - Italy - are the largest. Neither will the battle be easy in Geneva where the electorate will be called to choose between their European identity and the fear of salary dumping (like Ticino, Geneva has high unemployment and a high number of cross-border workers.) The financial crisis, felt also in the Swiss Confederation, obviously hasn't helped - neither have controversies and incidents of crime involving Roma and Romanians in Italy.

Before completely opening its own market to Bulgarian and Romanian workers, Switzerland will avail itself - as it did for the 'EU-15'and is doing for the 'EU-10' - to a period of transition during which the number of work permits granted annually will stay under a predetermined, incrementally rising ceiling. Complete free movement, in other words, would take force only after 2015 (2012 for the EU-10) unless Switzerland shortens the interim period, which seems to be rather unlikely.

In addition, Switzerland is not a typical destination for citizens of these countries. Excluding Italians - the largest minority, but already so deep-rooted as to not be an object of debate - the majority of foreigners in Switzerland come from the western Balkans, that is, from states that are not (yet) part of the European Union. Most of them are Albanians from Kosovo or Serbs, followed by Croatians and Bosnians.

Despite its reputation of xenophobia, Switzerland is one of the European countries with the highest number of foreign residents: about one in three. Switzerland is not part of the EU, but 50% of its exports and 80% of its imports take place with EU countries. Bern accesses a large part of the entire European market and financially supports its development with contributions to the poorer regions of the new member states (while keeping management of the money flow independent of the Commission). In the Confederation, one job in three is connected to the European Union but a majority is opposed to joining the EU and, in 1992, also rejected an offer to join the European Economic Area - that enlarged circle which includes, in contrast, countries like Norway and Iceland.

The country's connections to Brussels are nets of a spider web woven ever more densely with bilateral accords. It is also a spider web that, if on 8 February the country's ballot boxes do not produce a "double yes," will almost certainly unravel, taking the clock back nearly 15 years. Some of the accords would be cancelled automatically for being tied to a clause called "The Guillotine." Others, like accession to the Schengen area, even while legally admissible, would be difficult to apply in practice.

This, at least, is what the European Commission claims and, needless to say, some of these threats have the opposite effect, ultimately convincing the isolationists of the need to teach arrogant Brussels a lesson.

The EU also enjoys great benefits from its relationship with Switzerland and hurting her wouldn't be a painless ordeal. Brussels, on the other hand, could not accept a snubbing of two full-fledged members. The Bulgarian government considers the freedom of movement issue mainly a question of principle since not many Bulgarians are currently seeking to emigrate and Switzerland is not among their favourite destinations anyway. In contrast, workers are beginning to return to Bulgaria and Sofia hopes they will only increase, especially if they are skilled labourers. In case of a Helvetic "no" to the agreements, the nature of Brussels's response will demonstrate, for Romania and Bulgaria, the full measure of European solidarity.

The author is a correspondent with the Italian-language Swiss radio and television (RTSI) in Brussels and, in the nineteen-nineties, worked as a correspondent from the Balkans. The opinions expressed here are those of the author himself.