The undeluded going astray in Bosnia 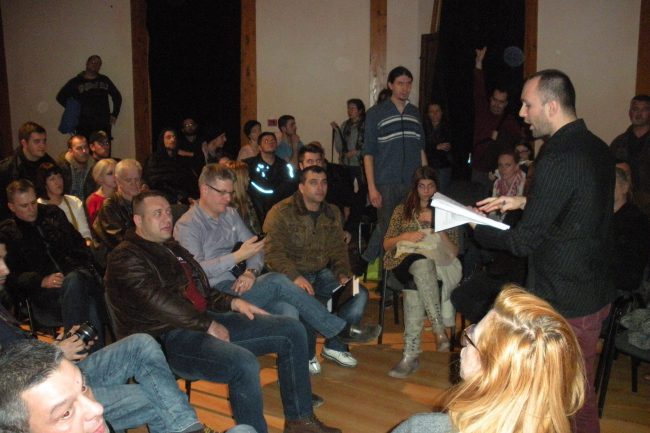 The process of integration into the European Union, which has been stagnant for a decade now, has exposed the sad reality of a total lack of political will on the part of Europe. An analysis of the current crisis in Bosnia Herzegovina

Today like yesterday, the undeluded­­ — those who claim to know what is really going on and reject out of hand any slightest prospect of emancipation — are still wide of the mark, and in Bosnia in particular.

Global warming is without any impact on the “Bosnian spring”. The crisis that has been eating away at the country for over ten years now knows no seasons. The same is true of the street demonstrations, not to mention the proliferation of self-generating citizens’ groups that emerge on a daily basis in Sarajevo and Tuzla, where the movement first got under way.

By a quirk of fate, the return of the (Yugoslavian) self-governing tradition is out-performing both the nationalist parties and the many western ‘civil society’ development programmes which, at their very best, have given rise to ‘offshore’ companies in the form of NGOs that often represent the only job-possibility. Faced with the scale of this social movement, the experts who kept trotting out the same line about the non-existence of any civil society have got little return for their pains.

We would be better placed to understand what is today being heralded as a new social movement if we were to look back at the scale of the April 1992 pacifist movement, and then, during the war, the size of Tuzla’s Citizens’ Forum which united some ten thousand citizens in proactive solidarity. This same forum was to serve as the lynchpin of the Citizen Alternative Parliament (GAP) of Bosnia, founded in August 1996, which went on to form the umbrella for upwards of thirty different citizen initiatives across the nation.

Hot on its heels, the Sarajevo Law Centre set about a process of critical appraisal of the Dayton Agreement (GFAP), which at that time everyone expected would soon be amended, rewritten, or even abolished. When the first round of elections backed the power of the nationalist parties, the opposition forces came together time and again in a shadow government, finally bringing the ‘Alliance for Change’ to power in January 2001; though sadly it proved too fragile to last. And here we shall close our list of the initiatives that we saw being devised and established against all odds by the activists of Bosnia.

Alas, it is true that this potential for expertise and engagement on the part of local players was never on a sufficient scale to compete with the power of elites who were more corrupt than nationalist, and who always knew how to play on the presence and support of an “international community” that at times was as naïve as it was obliging.

Today, it is plain to see that the vote-catching antics have run out of steam, hence the harsh criticism being levelled at the corruption of the political class as a whole, regardless of regional origin and allegiance. Even so, at a more fundamental level it is the country’s political architecture, negotiated in Dayton in 1995, that now finds itself in a state of collapse.

The “international community” bears as much responsibility for this lamentable situation as do the local representatives. Not only has the “state graft” been rejected, but with one clumsy initiative after the next (the last to date being the 2010 “Butmir package”), both Washington and Brussels have contributed to plunging the country into a situation of Kafkaesque dimensions. The process of integration into the European Union, which has been stagnant for a decade now, has exposed the sad reality of a total lack of political will on the part of Europe.

To those who are still pleading that change must come from outside the country, that it must be imposed, need to understand that democracy cannot be imposed. A more viable alternative is possible: one that resolutely empowers local stakeholders. It so happens that Bosnia has experience in such exercises, limited though they were. In the wake of the creation of the Partnership Forum and the Civic Forum in July 2001, by the then High Representative, these two new set-ups were able to kick-start the process of constitutional reform in the two entities. They were concluded on 27 March 2002 with the Sarajevo-Mrakovica Agreement. In this negotiation process, which included experts and representatives from public interest groups, local players led the process, assisted by international experts. Likewise, further agreements have been reached since then, notably on military reform and the status of Brcko district.

Admittedly, what is now at stake is on a considerable scale… A complete overhaul of the Dayton Agreement is unavoidable. It has become all too obvious by now, that the reform of the overly complex constitution is a must, with the clear aim of putting in place a functional institutional architecture that will both strengthen the core capacities of the state and introduce a smart de-centralisation process at the level of the regions that still have to be created.

This in turn presupposes an end to the two-entity division of the country (both entities having proven to be as dysfunctional as they are weary) and the abolition of the ten cantons in a Federation that has been bankrupt since 2003.

Whilst the evidence is overwhelming, Bosnian experts have already formulated streamlined political alternatives as far back as 1996. The “international community” has thus far refused to open what they call the “Pandora’s box”. Displaying both misjudgment with respect to myth, and scorn with respect to politics, the western diplomats gave up long before the Bosnian politicians.

Let’s be more specific. Already back in 2007 when the desaster of the Dayton-implementation was looming on the horizon, Milan Kucan, the former President of Slovenia and one of the insiders of Yugoslvia's break-up had called for Dayton II to be drafted under the aegis of the signatories Bosnia-Herzegovina, Croatia and Serbia, with international representatives as observers.

This scenario has the merit of reaching beyond the alternatives  external imposition or internal solution. It sets out in a convincing manner a partnership that would assign a precise role to each party. It needs to be mentioned, that the Sarajevo Foundation Public Law Center (CJP) has been engaged since 2012 in a state-wide public debate with a view to drafting a new constitution. The expertise required is very much present in the country itself.

An alliance between local expertise and the new civic forces such as the Citizens’ Plenum  in Tuzla - could very well develop into a public space that could challenge the clueless nomenklatura. Bosnia’s social movement is emerging from a state of powerlessness and is opening up new possibilities. That said, a different Bosnia needs a different Europe. Brussels surely wants to avoid finding itself in the same situation in Sarajevo tomorrow, as it is in Kiev today.