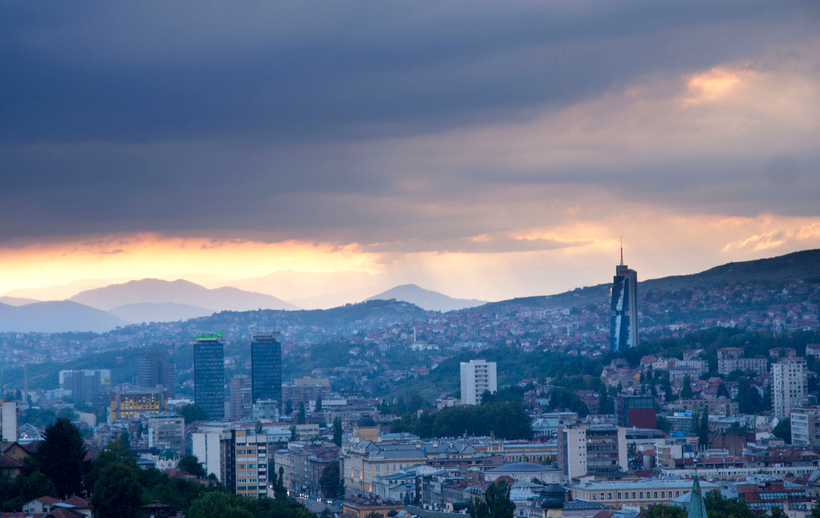 Protests are continuing after Friday's uprising, but media hype and national issues are looming upon the demonstrators. The European maze

Mobilizations in Bosnia and Herzegovina (BiH) continued throughout the weekend and yesterday, despite the resignation of the prime ministers of the cantons of Tuzla, Sarajevo, Mostar and Bihać, and of Himzo Selimović, head of security of the Bosnian Presidency, as well as the release of most of the protesters arrested in recent days. The uprising, triggered by the workers of 5 privatized factories in Tuzla, culminated on Friday in a day of clashes with the police and destruction of government buildings in some of the country's major cities. In recent days it morphed into a series of peaceful sit-ins and garrisons in front of the main institutional premises. The atmosphere seems to be that of a calm full of expectations, while nobody dares to formulate predictions about the possible developments of last week's explosion of anger.

The protests, with the partial exception of Tuzla, still seem disorganized or organized in a completely informal way, through social media or word of mouth. Mobilizations continue to cover mainly the cities of the Federation of Bosnia and Herzegovina, and not Republika Srpska. The main demands of protesters, despite some differences related to local situations, are the resignation of the political class, the formation of a technical government, and the release of those arrested. The manifesto of the workers and citizens of the canton of Tuzla asked demonstrators not to leave the streets, but to maintain public order and cooperate with police and civil protection (police in Tuzla in some cases has sided with protesters ). Demands include cancelling the privatization contracts of the 5 companies the situation of which has given rise to protests (Dita, Polihem, Poliolhem, Gumara, and Konjuh) and to "return the factories to workers, restarting production where possible".

Živko Budimir, President of the Federation of Bosnia Herzegovina, said that "politicians have heard the voice of the people loud and clear", but rejected the request to resign and said that violence must stop. On the same line are the statements by Bakir Izetbegović, one of the three presidents of BiH, and Zlatko Lagumdžija, Minister of Foreign Affairs. According to the latter, leader of the Social Democratic Party, "the understandable discomfort of the population was manipulated by groups that have the goal of destroying [the country]".

The majority of the political class seems to agree in indicating hooligan groups as responsible for what happened in the past few days, trying to get consensus in condemning the violence, and therefore the protests. Some have even compared the protesters of Friday in Sarajevo with the city aggressors during the war years. The destruction of the historical archive retained in the Presidency, reached by fire during Friday's accidents, created dismay in a city that suffered the destruction of the Library (Vijećnica) during the war of the 90s. In what still appears to be as a shady situation, marked by the frantic search for a scapegoat, news surfaced in the social media that, in fact, the archives would be intact. So say several representatives of Sarajevo's civil society, including Damir Imamović, beloved sevdah musician, and film director Jasmila Zbanić, who reported statements of archive employees that contrast with the official version.

Aldin Arnautović, on the media portal BIRN, highlighted how the comparison with the 90s basically sets the ground for the lynching of protesters. Mile Stoijć, another well-known Bosnian journalist, similarly commented on Radio Sarajevo that "the hooligans are in the structures of power", while those who participated in the riots are the generation "of those who were born during the war, in poverty and hopelessness, raised in chauvinism, hatred, xenophobia, and material and spiritual misery, and now seek to bring attention to their existence in this way, because they have no other".

A statement by Valentin Inzko, High Representative of the international community in Bosnia and Herzegovina, who said that "if the situation worsens, we could have to resort to sending EU troops to the country", certainly did not help defusing the tension, also because the regional framework is – if possible – even shadier than the domestic one.

On Sunday, Deputy Prime Minister of Serbia Aleksandar Vučić met Bosnian Serb leaders Milorad Dodik and Mladen Bosić to discuss developments of the crisis in Bosnia and Herzegovina. Milorad Dodik, President of Republika Srpska (RS), stated that the goal of the protests is "to destabilize RS by causing the international community to intervene in the affairs of the country" and that "the chaos in the Federation [... ] shows that BiH cannot survive challenges at home and that it does not work".

Prime Minister of Croatia Zoran Milanović, instead, travelled to Mostar in order to "calm the situation". The visit was criticized by Željko Komšić , one of the three presidents of Bosnia and Herzegovina, according to which the Croatian Prime Minister should have gone to Sarajevo. Asked by reporters why he had not gone to the capital, Milanović answered that "Mostar is closer" to Croatia.

In the Herzegovinian town, today with a Croat majority, the sirens of ethnic division do not seem to have worked so far. In recent days, in addition to government building, protesters carried out bipartisan attacks to the premises of both Croatian HDZ and Bosnian Muslim SDA parties. As young Mostar citizen Teo Grančić wrote in a popular online article , “it wasn't Muslims, nor hooligans, nor anarchists” to protest in Mostar, "nor someone paid to do so. It was the people". 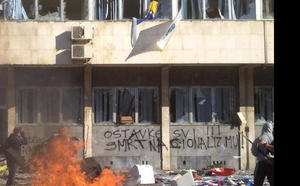 On the walls of Tuzla, in the early days of the protests, workers wrote "Resignation! Death to nationalism!" So far, no one has managed to place the ethnic card on the demonstrators. On the contrary, solidarity with Bosnian protesters also came from Belgrade, where yesterday there was an event attended by several hundred people, gathered by a Facebook group simply called "Support from Serbia to the people of Tuzla". The call reads that "the best that we can show solidarity is to organize too against the plundering of the people's resources, which has continued for 20 years through wars and privatization".

The Serbian police union has taken the initiative seriously, expressing fear that such demonstrations could occur there too. "It's logical that a similar scenario may occur also in Serbia, where [as in BiH] there is a mass of unemployed, employed without wages, corruption at all levels and politically manipulated citizens", they wrote in a statement reported by the BIRN portal on Sunday.

That of Bosnia and Herzegovina, however, is not only the Balkan version of the crisis that we have been experiencing in Europe for years. It is the crisis of a system. The Dayton system, which served to stop the war, no longer works. Richard Holbrooke, its creator, confessed 10 years after the signing of the agreements that he never thought they would last so long.

A constitution in conflict with the European Convention on Human Rights, which puts the rights of ethnic groups above those of individuals, cannot work for a European country. This is why the European integration process for Bosnia and Herzegovina has become a maze.

The EU actually suspended it by freezing €47 million of pre-accession funds in 2013 and postponing indefinitely preparations for the granting of a new package of funds. BiH political elites, however, have no incentive to change a system that ensures their survival. The very electoral mechanism is structured so as to perpetuate the division at each level of the institutions. In the European and international indifference, citizens are left with resentment and anger.

Aleksandar Hemon, the famous Bosnian writer since long-time a Chicago resident, warned about the risks of the current situation. In a contribution for Radio Sarajevo , he wrote that "anger is now in metastasis, and it is difficult to imagine how all this unrest can be brought to subside. In Bosnia and Herzegovina there are no structures to turn this anger into a political force or into some positive form. It spreads like fire in the woods. If one drop of blood is spilt, there is no return”.