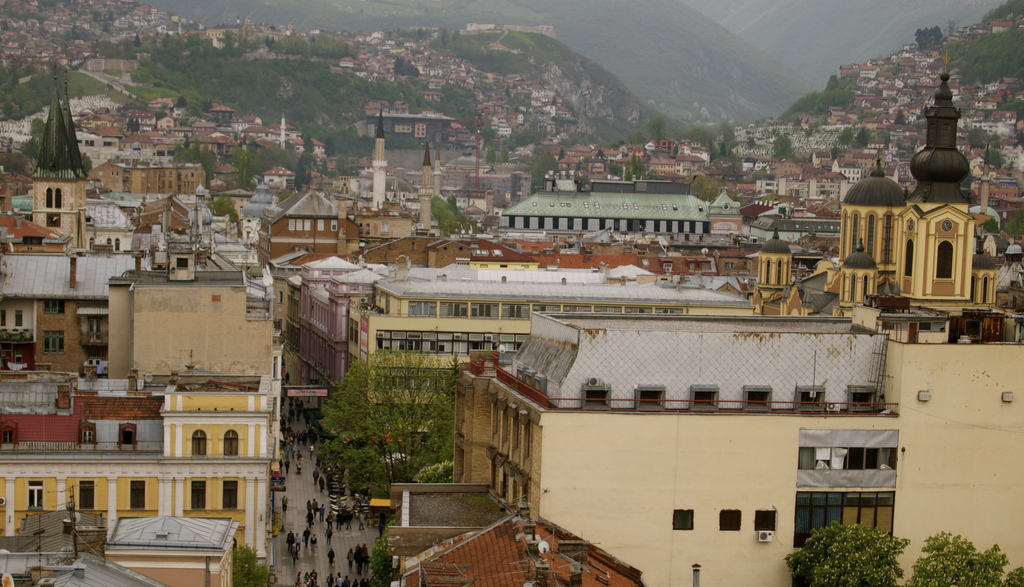 The ERMA master's degree in human rights and democracy, flagship programme of the Universities of Sarajevo and Bologna, is not receiving the funds made available by the EU and the Italian Government because of internal feuds in the Bosnian University

"It's a difficult situation, with students as collateral damage. We have invested a year of our life to come here, we left our families... Someone, like me, even left a job".

Until last summer, Davjola worked as a researcher for the Konrad Adenauer Foundation. Then, by chance, she discovered the European Regional Master's Degree in Democracy and Human Rights in South East Europe (ERMA), and decided to move to Sarajevo.

"The programme appeared intense, but conditions were excellent: you could obtain a dual degree with only two semesters of classes – one year, against the usual two. And, in addition, a 500-Euro scholarship for all students".

Five hundred Euros for many seem to be a viable alternative to a monthly salary. In the region, in fact, it is more than an average salary. Educational aspirations aside, for many this played a part in the decision to move to Sarajevo and start a new life, not without sacrifices.

Cecilia, for example, spent time in Ireland to be able to obtain the required English-language certification and, like many of her colleagues, had to spend several hundred Euros for the official translation of documents. Xavi, a colleague of Finnish-Mexican descent, in an excess of zeal, has even already paid the one-thousand-Euro registration fee, due by March. "Had I imagined things would go like this, at least I would have waited", he says sadly.

As of now, over three months after the beginning of classes and after the students' arrival in the Bosnian capital, no one has yet received a single Euro of the much coveted scholarship. The reason is an internal battle at the University of Sarajevo [UNSA], one of the partners in the programme, which has so far prevented the signing of the contract with the European Commission and the Italian Ministry of Foreign Affairs.

Delays and deferral of payments, as acknowledged by ERMA students, alumni, employees, and managers, are unfortunately the norm due to administrative complexity and different ways of managing financial resources coming from the EU and the Italian government. But the situation is now complicated for students, especially for those who come from other countries and had to seek housing in Sarajevo on no other revenue than the – so far only promised – scholarship.

"Everyone survives as they can, some ask their parents for money, some borrow from friends, but this cannot last much longer", explains Davjola. "If a solution is not found quickly, many are thinking of leaving the programme".

In fact, recent developments have reassured students. "The Academic Senate has already scheduled an extraordinary session for the approval of the contract", notes Professor Francesco Privitera, academic coordinator of the programme. "The solution, in short, should be in sight", he emphasises.

The funding of the programme has never been questioned: ERMA is an integral part of the European strategy for Bosnia and Herzegovina and will remain so until 2021. The delay in signing the contract has been so long because of an internal political dispute at the University of Sarajevo, called to elect the new Rector in a few months (the new appointment is scheduled for March).

According to Professor Privitera and Professor Asim Mujkić, local co-director of the programme, the matter is in fact "political".

"Particularly since last December", explains Mujkić, "the clash between the Rector and the Academic Senate has become particularly intense, with mutual accusations and requests for resignation. Now, fortunately, the situation has improved significantly, and in ten days", he concludes, "the issue should be resolved once and for all".

In a duel with current Rector Muharem Avdispahić, president of the Academic Senate Mevludin Mekić has allegedly stalled the signing of the agreement [for a total value of over 700,000 Euros] in order to discredit Avdispahić in view of the oncoming election. Avdispahić even wrote to Elmedin Konaković , Prime Minister of the Sarajevo Canton, to denounce Mekić's obstruction and stress the incompatibility of his resume with the position he holds, since Mekić's role as a professor at the University of Travnik would prevent his appointment as president of Sarajevo's Academic Senate on grounds of conflict of interest.

A flagship programme of the University of Sarajevo

All in all, a happy ending appears to be in view. It is, however, unfortunate that these issues have partially spoiled the beginning of ERMA's fifteenth academic year. Over the years, the programme has trained dozens of students who went on to become important figures for Bosnia and Herzegovina, like Emir Suljagić (former Minister of Education of the Sarajevo Canton and former Deputy Minister of Defence), Ivan Barbalić (who has just finished his term as Ambassador of Bosnia and Herzegovina in Russia), Faris Vehabović (Vice President of the Constitutional Court of Bosnia and Herzegovina), and Ivana Howard (responsible for the assistance programme to democratic development in South East Europe of the National Endowment for Democracy – NED).

In these 15 years, ERMA has trained over 400 students from across the region and the world, becoming one of the most important programmes at the UNSA and in the entire country.

"ERMA has been a jewel in the crown for the University of Sarajevo for over 15 years", stresses Italian Ambassador in Sarajevo Ruggero Corrias, who is confident that "the University will act in its own interests and in those of the country, putting in place as soon as possible all the necessary steps to facilitate the funding of the Master by Italy and the European Union, that have always been strong supporters of this initiative".