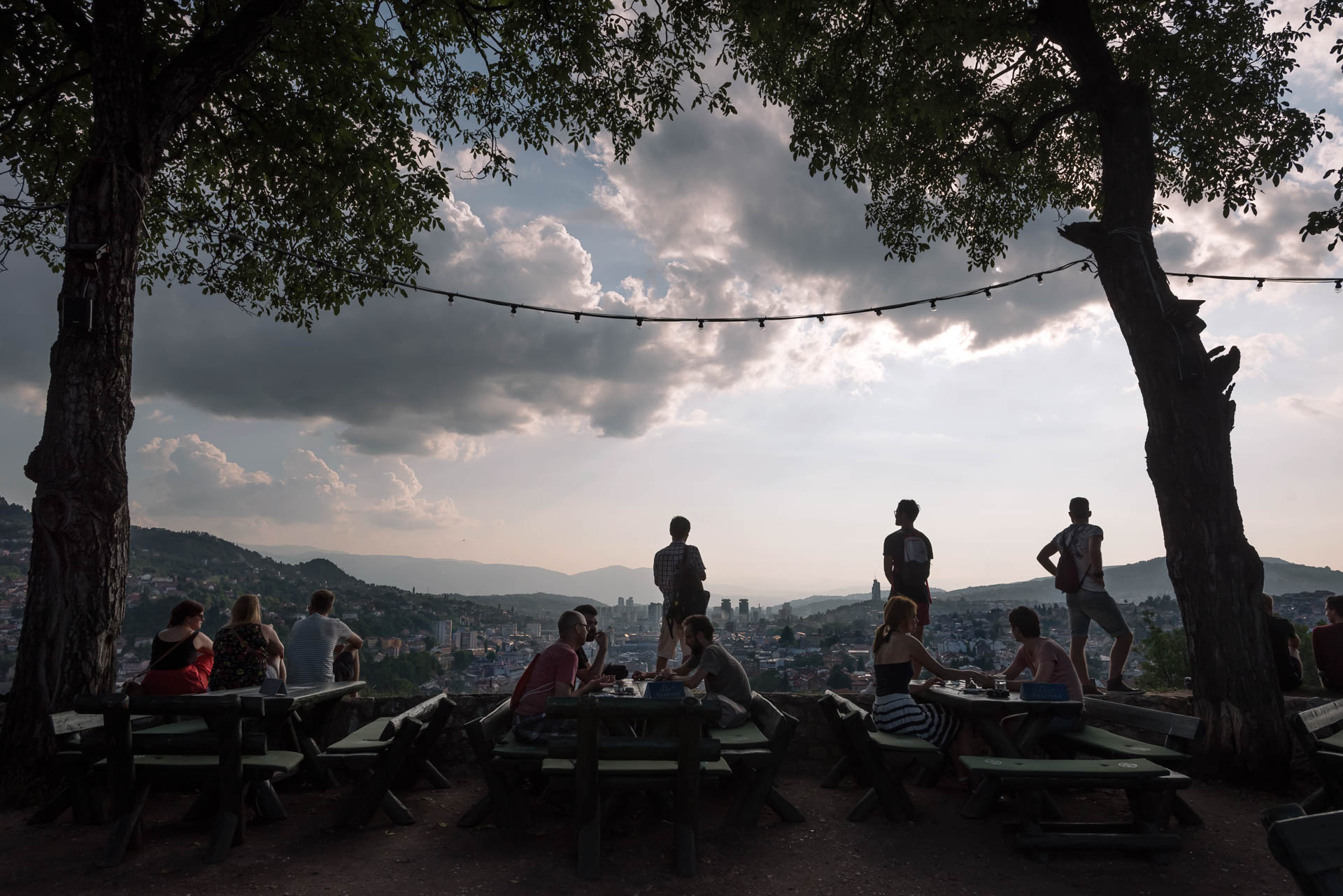 The pandemic has dramatically affected the life of 28-year old Ivona and many other young people in Bosnia and Herzegovina. The desire to work, the search for civil rights, and the spectre of emigration: their gaze on the future

If the pandemic had not happened, today 28-year-old Ivona Kukic from Zenica probably would be living in Ljubljana attending a PhD programme in English language and literature. However, the pandemic has forced her to study online. In addition to distance learning, in the last year and a half Ivona has explored other formative and working opportunities. Despite having no previous experience as a journalist, last year Ivona joined the editorial team of RadiYo Active , the first community radio in Bosnia and Herzegovina entirely run by children and young people. After receiving a double Masters' degree in English language and literature and Art history, for four months Ivona searched in vain for a job that would match her qualifications, before joining the youth association “Nasa djeca” [Our children] responsable for managing RadiYo Active.

“Less than a month after I made that decision, the pandemic broke out and soon afterwards the first cases of Covid 19 were reported in Zenica”, Ivona recalls. “From the moment the first and most severe lockdown was introduced, everything became surreal”.

The anti-contagion measures turned Ivona’s and her friends' lives upside down, but all in all they coped well during the lockdown period, they even managed to meet, trying to reduce the sense of isolation and loneliness. For Ivona the lockdown period was also an opportunity to rethink her relationship with her parents and her sister with whom she still lives.

“At my age it’s not easy to accept the fact that I have to live with my parents, and [during the lockdown] it was really difficult to spend so much time with them. The four of us, all adults, each with their own problems,constantly bumping into each other, moving from room to room. I missed the fresh air and late night walks, I missed being able to go outside whenever I wanted”, says Ivona, adding that the feeling of fear was the hardest to bear.

“I was afraid of getting the virus, I was afraid of trasmitting it to my family or to an 80-year-old lady living next door, or to a woman standing behind me in line at the store. I didn’t want to be responsible for someone’s death. I was afraid of travelling and of moving to another city because everything was uncertain. New measures could be introduced at any moment so I would have risked getting stuck abroad, away from home. It was difficult for me to look at the photos from China and Italy, I felt we were all in the same boat, we were all struggling with the same problem, and sometimes I was moved by solidarity and by sense of comunity and humanity”.

According to research on youth emigration in Bosnia and Herzegovina published in August 2021 by the United Nations Population Fund (UNFPA), almost a quarter of young people in Bosnia and Erzegovina is seriously considering leaving BiH permanently, and more than 23% of them is thinking about temporary migration. “Around 60% of those who wish to leave the country often think about emigration, and their migration aspirations have grown stronger due to the COVID-19 pandemic”.

Jasmin Husic, one of the authors of the report, explained that in Bosnia and Herzegovina the participation rate of young people in the labour market is still very low and that the educational system is inadequate to guarantee to young people even a minimal chance of finding an adequate job after graduation.

The survey also showed that young people in BiH, on average, are generally dissatisfied with the quality of their living environment. More that 30% of young people indicated their dissatisfaction “primarily observed through insufficient availability of public services and programmes tailored to their needs”, while more than 40% believes that interethnic tensions in BiH are possible. The majority of respondents experiences either stagnation or deterioration of the standard of living in their immediate environment.

Many young people in Bosnia and Herzegovina, like Ivona Kukic, temporarily gave up the idea of moving abroad beacuse of the pandemic and the adoption of restrictions on freedom of movement. In the meantime, they are trying to figure out what to do with their lives.

According to a recent survey published by UN Bosnia Herzegovina, the social and economic impact of Covid-19 will place considerable strains on social cohesion in BiH, exacerbating existing economic differences and vulnerabilities. “The economic gap is one of the reasons that push people to emigrate. There is a widespread perception that youth emigration pushes the abandoned areas into a vicious circle of underdevelopment. Even if Covid-19 slowed down youth emigration, this issue will certainly re-emerge because of the structural problems of Bosnia and Herzegovina”.

According to what emerged from a survey on the impact of the pandemic on young activists in Bosnia and Herzegovina carried by Mozaik Foundation and KULT Institute, more than 20% of the respondents lost a job during the first wave of the pandemic (some temporarily, others were fired). As far as school is concerned, more than 30% of young people thinks the quality of lessons has drastically decreased during the pandemic, and more or less the same percentage lost the motivation to study.

Katarina Vuckovic from KULT Institute explains that the pandemic has exacerbated the problems faced by young people in Bosnia and Herzegovina, adding that in the last few years the priorities of young people have changed, many of them go abroad not only in search of work but also looking for a more stable life prospect that could allow them to assert their civil rights.

“According to results emerged from a survey that we recently carried out on needs and condition of young people in BiH, young people expect that in the next five years the government first of all tackles the problems related to employment, education, and healthcare, and only secondly the problems related to security and migration in the context of youth emigration in BiH”, says Vuckovic.

The impact of COVID-19 on the mental health of children and young people could be felt for years to come, thus aggravating the problems related to mental health that even before the pandemic had not been adequately addressed. These are the main results that emerged from a new UNICEF report , according to which 1 in 5 young people aged 15-24 often feel depressed or totally unmotivated. As the pandemic continues, the consequences on young people’s mental health will surely multiply.

As stated in the report, “globally, at least 1 in 7 children has been directly affected by lockdowns, while more than 1.6 billion children have suffered some loss in education. The disruption to routines, education, recreation, as well as concern for family income and health, is leaving many young people feeling afraid, angry, and concerned for their future”.

To date, no in-depth research has been carried out on the impact of Covid-19 on the psycho-physical health of young people in BiH. The only data available are those emerged from the above-mentioned survey conducted by KULT Institute according to which more than 40% of young people felt stressed due to the general atmosphere during the pandemic, while more than 30% of them struggled to adapt to COVID-19 containment measures.

“Today I no longer want to go out in the evening like before. Instead of being in a crowded, poorly-ventilated room, I prefer going out for a walk, staying at home, or going to the editorial office. I prefer more intimate and quiet socialisation”, explains Ivona Kukic.

As far as distance learning is concerned, Ivona says she is satisfied with the quality of the course attended, but she adds that it was not easy to deliver the best results and to meet the deadlines because the course took place entirely online.

“My friends that study in Bosnia and Herzegovina encountered even greater problems, it took them a lot of time to adapt to distance learning. During the pandemic both teachers and students worked less, there was a lot of confusion and, according to my friends, the quality of the lessons has drastically decreased”, explains Ivona.

Looking back at the last year and a half, Ivona says that the pandemic has given her the opportunity to reflect on the future, to train herself to be more patient, to know herself better, and to improve her relationship with her family.

“I am sure that, if the pandemic hadn’t happened, I would have moved to Ljubljana and stayed there to study, enriching myself with new experiences, knowledge, and adventures. However, I keep asking myself if I could have found a real job if the whole world hadn’t stopped because of the pandemic. In Bosnia and Herzegovina probably not, but abroad I surely would have had better chances”.