Bosnia and Herzegovina: in the shelters 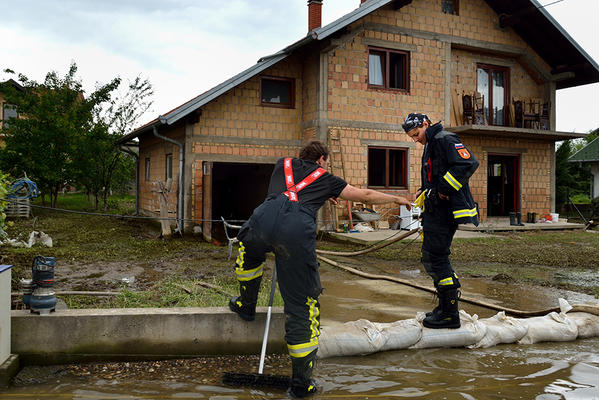 About a thousand Bosnian citizens remain housed in temporary shelters in the aftermath of the floods that devastated the country last May. Neither they nor the institutions have any certainty about what to expect in the coming months

The army officer guiding me through the town's barracks, in Zenica, does not seem surprised by my presence. "There are many journalists who come here, broadcasters, photographers", he says as he shows me the dormitories where those evacuated after last May's floods are still housed. “We have become accustomed to it. Although", he points out, "there are not so many guests now". Those who were able to return home, after these weeks, already did. "At the moment of maximum emergency, here there were about a thousand, twelve hundred people. It's an approximation, though, it was impossible to maintain a register of presences efficiently. Now, however, we do not have more than 130 guests”. Many of them, taking advantage of the beautiful day, decided to leave the military area and enjoy a change of air, at least for a couple of hours.

Those who remained, a few dozen people, are doing time as they can, mostly hanging out. Many of them wander aimlessly from one side of the garden to another. Someone just lies in the dormitories, staring at the ceiling. At the entrance of the structure I met Suad, from Kolići, a small village in the area destroyed by landslides. With his wife and three children he managed to find temporary accommodation with friends. "But my father and my mother are very old and have nowhere to go; they were forced to stay here".

According to the UN statistics, about 1,200 people have not yet left the forty collective centres where they were hosted after last May's disaster. "Now my second month here begins", sighs Ramiza, originally from Topčić Polje. We sit down together, she shows me some thirty photographs all with the same subject: her house destroyed, buried by a mudslide. "Here we have everything. We are treated very well. Food is plentiful, we have medicines, everyone does their best to help us. But I do not know what I'll do tomorrow. I do not have a place to return to. No news, no news. Nothing at all".

This is the tragedy of those who have not been able to return to their homes yet. They have no prospects. "We do not know quite what to do with these people", says my camouflaged host. “Now it's summer, but in autumn they will probably have to leave". Those who were forced to find shelter in the barracks or in schools often belong to the most disadvantaged groups in Bosnian society. People who could not rely on family or relatives to host them, albeit temporarily, as most of the displaced were able to. Lonely elderly, the poor, single mothers. If they were not able to return to their homes after five weeks from the disaster, it means their houses cannot be recovered, not even partially. Haso, a disabled veteran of the war of the nineties, is from Topčić Polje too: "I have no one to rely on", he says, "so I'm forced to stay here".

The silence of institutions

According to surveys conducted by the IOM (International Organisation for Migration) and updated on June 14th, something like 21% of the displaced will not be able to return to their homes. The question that arises is, quite prosaically, what to do with them. A solution must be found before the autumn, when schools (which house the majority of shelters) will reopen their doors for the new year and there will be no longer space for the displaced.

On this, unfortunately, the government seems to have very confused ideas. Likewise are data on collective centres: currently, the only full list is published on the website poplave.ba , but it is not updated. To know what centres are still in operation, one must call all the numbers, one by one; another list by the Red Cross with the names of individuals evacuated is available at this address .

In the immediate aftermath of the disaster, a task force was created within the Ministry for Human Rights and Refugees. One of its members, Mario Nenadić, does not hide the fact that works are in a stalemate: "The centres are undoubtedly a temporary arrangement", he tells OBC. "As of now, our priority is to help first all those who have suffered only partial damage to their homes". A strategy dictated by common sense: "We need to focus our resources right now. Unfortunately, devoting our efforts to rebuild the buildings that were totally destroyed would accomplish nothing. It is a task beyond our reach. For now, we are concentrating our efforts in order to send back home the highest number of people in the shortest possible time". What about the others? Nenadić hesitates: "For them, it will take more time. Presumably, we will know something more after the international donors' conference to be held in July".

The danger of corruption

The very approaching of the international donors' conference is highlighting the gaps in the policies implemented by institutions for the benefit of flood victims.

First, it is not yet clear how the government wants to take action to help victims of the floods which, according to the latest official estimates of June 18th, have caused damages for over two billion Euros. There are, in fact, no official plans. If in Republika Srpska (one of Bosnia and Herzegovina's two entities) the issue has been addressed with a healthy dose of pre-election rhetoric by current president, Milorad Dodik, who promised a compensation of 2,500 Euros for each citizen (glossing over the fact that such an expenditure would be impossible, given Republika Srpska's current budget shortfalls), in the Federacija nothing has been announced yet. Everyone is literally in the dark.

Another, not secondary question, involves the possibility that financial aid from abroad gets swallowed up by the inefficiency of the Bosnian administration and especially by corruption, widespread at all levels. "International institutions do not harbour the slightest confidence in our ability to administrate", recently complained Bosnian journalist Željko Bajić to Deutsche Welle. "If in Sarajevo our institutions are relatively under the control of police and anti-corruption bodies, the situation in local administrations is absolutely catastrophic". If managed efficiently, aid for reconstruction may prove to be a positive factor for the country's future: "The international community could provide financial aid on condition that the different levels of our bureaucracy begin to develop mechanisms of cooperation – which tragically lacked in the very aftermath of the emergency – but frankly", concludes Bajić, "it seems to me that no one is too clear on how to solve these problems".