South-East Europe is burning: how temperatures have risen for the last 117 years 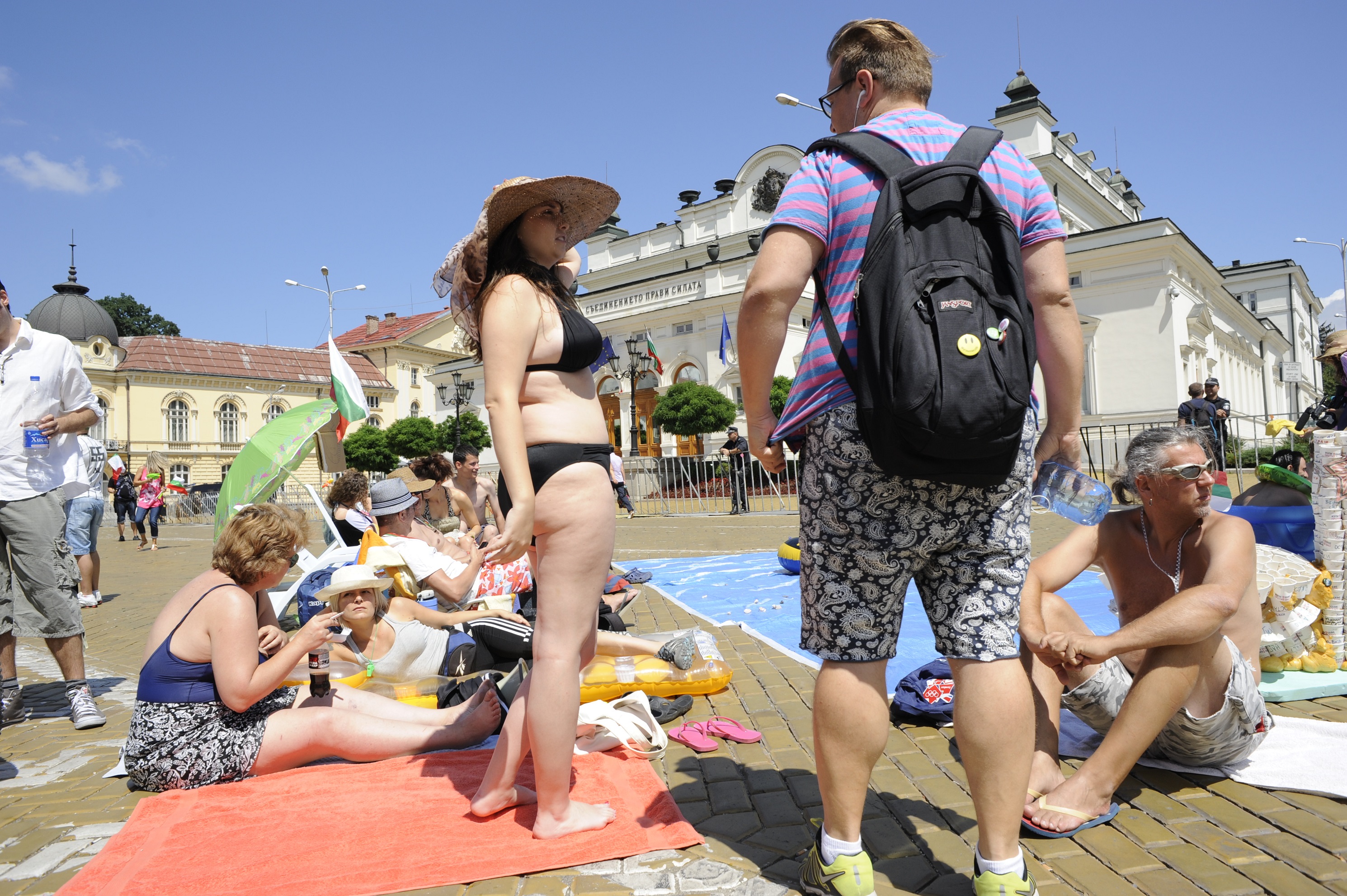 The effects and risks of climate change are felt in the Balkans too, but dealing with the issue is often "left behind". EDJNet analysed the increase of temperatures in the cities of South East Europe since 1900

In December 2015, with the signing of the Paris agreement, 195 countries committed to "limiting the increase in temperature to 1.5°C compared to pre-industrial levels".

However, for many cities in Europe, this threshold has already been reached, as shown by the data gathered, analysed, and published by the European Data Journalism Network (EDJNet). The most affected cities are mainly found in Spain, in the Nordic countries, and in Romania.

EDJNet analysed the data provided by the European Centre for Medium-term Weather Forecasts (ECMWF), which calculates meteorological data by combining inputs from various sources (meteorological stations, meteorological balloons, buoys, and satellite observations). This innovative technology makes it possible to study meteorological models for periods of over a century, because it harmonises inputs from thousands of data sources and enables comparisons in time and space.

The data taken into consideration range from 1900 up to 2017 and cover more than 500 European cities and surrounding areas, including 80 urban centres in the Balkan peninsula.

While it is commonly accepted that average temperatures have already risen by about 1°C compared to the pre-industrial age, EDJNet's analysis shows that in 60 cities in South-East Europe the increase has exceeded this threshold.

The most affected cities

According to EDJNet data, there are 6 Romanian cities among the twenty cities in which the average temperatures increased the most from 2000 to 2017, i.e. Buzău , Bucarest, and Craiova (+1,4°C), Ploiești , Brăila , and Galați (+1,3°C). Apart from these and others cities in Romania, in the list of the 50 European cities where the average temperature has increased the most we can also find Vidin in Bulgaria, Banja Luka in Bosnia and Herzegovina, and Split in Croatia (+1,3°C).

Another relevant indicator of climate change is the number of hot days recorded each year. The threshold above which one day is considered hot varies depending on the city and depends on the recorded average temperature. This indicator is calculated as the average of all the temperatures recorded during the day, thus allowing to appreciate the actual temperature trend, net of heat peaks that do not represent in themselves an effect of climate change.

This value for instance is around 27°C in Split, 29°C in Belgrade and Novi Sad, 25°C in Cluj, Romania, and Podgorica, Montenegro. Taking this into account, the number of hot days recorded each year has greatly increased throughout the peninsula, with borderline cases such as Split , where it has gone from 1 warm day a year in the 20th century to 13 a year in the 21st, or in Tirana , where warm days grew from 1 to 8.

Higher temperatures lead to excess mortality. The heatwave of July and August 2003, for instance, killed over 52,000 people in Europe, according to a recent study by the think-tank Earth Policy Institute. The elderly and infants are most at risk.

In addition to hot days, a relative indicator that depends on the characteristics of the city, there is a climate condition threshold common to all latitudes, beyond which learning capacities are affected . Researchers showed that when the daily average temperature increases above 22°C cognitive abilities of school children decrease, especially in mathematics.

The increasingly frequent exceeding of this threshold can therefore have repercussions, for example, on school performance. In Split and in Tirana, the number of school days above 22°C went from 4 per school year in the 20th century to 14 since 2000. In Pula , Belgrade, Bucarest and Zadar temperatures went over 22°C for 15 days a year.

Risk factors in the region

"The climate is changing across the continent, but the Western Balkans region is particularly vulnerable", points out in an interview with OBCT Radovan Nikčević, an expert from the Regional Cooperation Council . The organization has recently published a study that predicts for this area a temperature increase ranging from 1.7°C up to 4°C by the end of the century. The data analysed by EDJNet already shows that until 2017 an average increase of 0.9°C has been recorded in the 17 cities of the Western Balkans considered in this collaborative investigation.

The factors that make the phenomenon particularly worrying in this region, according to Nikčević, include delays in the implementation of European regulations on mitigation and adaptation to climate change. "There remains a strong fragmentation: very different policies, legal frameworks, and monitoring methods in the region make the fight against climate change more difficult. Furthermore, economic development is the undisputed priority for the region: this is why the fight against climate change is often left behind, postponed to better times. Finally, experience and skilled human capital on these issues are lacking in the relevant institutions".

With the exception of Kosovo, the countries of the region are all signatories of the Paris agreement, which binds to reduce emissions by adopting mitigation plans, which act on the causes of change. In addition to the limits deriving from the Paris agreement, some municipalities also participate in grassroots initiatives such as the EU Covenant of Mayors for Climate & Energy : signatories include Niš, Tirana, Podgorica, Skopje, and over 15 cities in Bosnia and Herzegovina.

Furthermore, the adoption of adaptation plans aimed at managing the already visible effects of climate change is also urgent. In order to grasp the progress made in the adoption of Local Climate Plans (LCP), the EDJNet consortium is gathering information on adaptation policies adopted or being adopted by European local authorities. 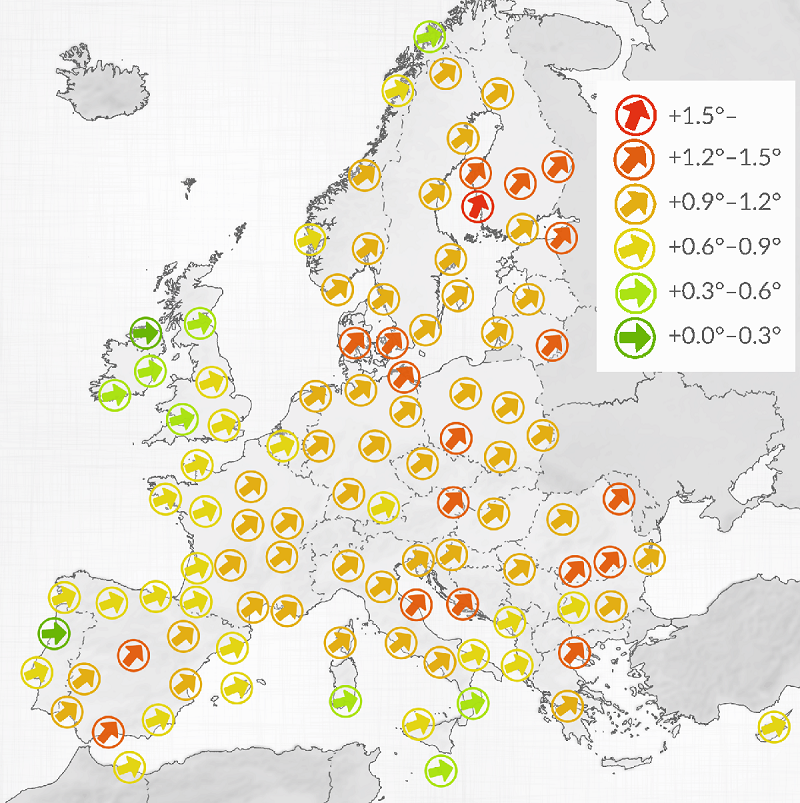 The dataset focuses on surveys in urban contexts, where the temperature increase is more intense than in rural areas: for this reason, city authorities have a crucial role in climate change mitigation and adaptation policies.

Both data sets are re-analysis, which means that ECMWF scientists used observations from a variety of sources (satellite, weather stations, buoys, weather balloons) to estimate a series of variables for squares of about 80 kilometers in side width (125 kilometers for ERA-20C). While weather stations offer a much better record for immediate daily observations, using the ECMWF re-analyses is much more adequate for the study of long-term trends. Weather stations might move, or the city might expand around them, making their data unreliable when looking at centennial trends. However, the ECMWF data does not take into account micro-climates or “heat island” effects, enabling to appreciate variations in the overall trend.