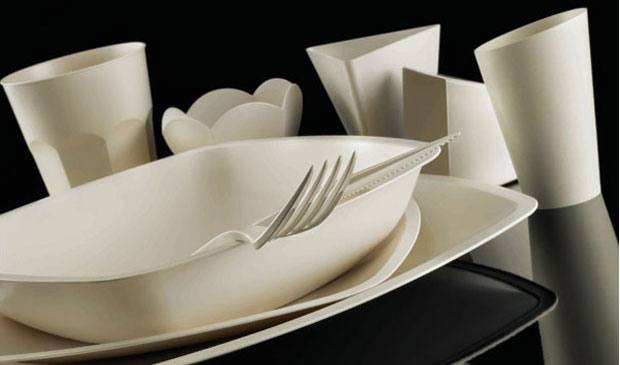 Plates and cuttlery in mater b

It's not a question of great inventions. What is required is the capacity to use existing technologies in an innovative and environmentally-friendly way. EU funds are now also available for SMEs in the Balkans, but proposals are not yet flooding in

September 8th is the next deadline for the European Commission's 'CIP Eco-Innovation Programme' aimed at promoting - as its name suggests - innovation, economic development and environmental protection.

Despite being accessible to small and medium enterprises (SMEs) from the Western Balkans, they seem slow in picking up on it.

The CIP Eco-Innovation, as the guide for this year’s call for proposal reads, “supports projects connected with eco-innovative products, techniques, services, or processes, which aim at preventing or reducing environmental impacts, or contribute to the optimal use of resources”. Its indicative budget for 2011 is 36 million Euros.

A major reason for this is probably the fact that the Programme is new to the region. The CIP Eco-Innovation has only become available to the countries of the Western Balkans in the past few years and in the region very few organisations have won projects as leaders or coordinators.

The CIP list of awarded projects shows two grants, ranging between 0,45 – 0,65 million Euros going to Slovenian companies in 2009. In the 2010 call, one grant was again won by a Slovenian company, and one by the Faculty of Civil Engineering from the University of Zagreb, in Croatia. These are practically all the grants won directly (as leaders, that is) by organisations from the region.

It is probable that a certain number of organisations have also benefited as partners but it is difficult to infer a specific number from the data available. Generally however, winning a project as a leader requires greater expertise.

Overall, the conclusion is that the CIP Eco-Innovation is still to a large extent an uncharted territory for the region’s companies.

Another reason for the small number of awarded projects is high level of competition within the programme itself. In 2010, out of the 287 applications received Europe wide, only 63 were provisionally selected for funding and the number of those whose funding was finally approved was even smaller (for a total of 35 million Euro).

In 2009, of the 614 submitted proposals, only 56 were selected to start negotiations for the final total funding of 32 million Euro. Generally, Spanish and Italian organisations lead the lists of project winners, followed by the ones from Germany, the UK, France, the Netherlands, and so forth.

What does the CIP fund?

The Programme doesn't fund research but so-called “first application” and/or “market replication” of innovations which are technically sound and need incentives to enter the market. The idea is that the funding is used to scale-up their production, promote their market penetration, and help the widest possible distribution of such products or processes.

For example, in 2010 support went, among other things, to projects aiming at: increasing the production of panels (used in aircraft interiors) made of recyclable and biodegradable material; enhancing the industrial production of paper bottles for dry products, such as pharmaceuticals and vitamins; producing insulation panels from textile waste; making pallet blocks from recycled plastic, and so forth.

Experts explain that what is needed is not necessarily a breakthrough invention, but innovative porposals for using existing technologies in ways that benefit the environment.

Albeit not very widely spread, such technologies do exist in the Balkans. Thus, companies from the Western Balkans should indeed consider the CIP Programme as a vehicle for promoting innovation-based growth. Preparing a relevant project prosal may look like a challenge for SME managers, but, it may be a consolation to note that countries such as Slovakia and Lichtenstein have not yet participated in the Programme at all.

What is at stake is not only the ability to innovate but also awareness about the Programme and the readiness to take part. Companies are generally little informed. Then, it takes time, from the moment they hear about a possibility until they decide to take part. To this end, for example, a series of workshops have recently been organised for Macedonian businesses by the country’s Ministry of Economy, with EU funding, to inform them about the CIP Eco-Innovation programme and the application procedures.

The administrative aspects of project proposal preparation are also demanding. Businesses are most often unaware that a complex and competitive application process is inherent to accessing EU funding and some SME managers are by complexity of the paperwork expected by Brussels.

The opportunity is there. But companies seem to be in need of a bit of a push to grasp it. They should, however, not be spoon fed. The ability to get the funding is also an indicator of the capacity to effectively use it.