Rocking and rapping in Azerbaijan 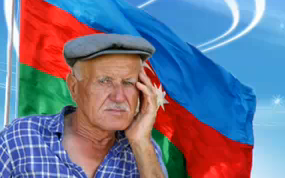 Music in all three republics continues to be dominated by those singers and musicians who are subordinate to nationalist or predominant political interests. But rock and rap bands are starting to speak out, especially in Azerbaijan

Alternative music in the former Soviet Union has always been synonymous with rebellion and hopes for change, but in recent years in the South Caucasus, few musicians have spoken out against the regimes in place. This has been particularly true in Armenia and Azerbaijan where music has more often than not taken on a nationalist leaning. All three countries illustrated that quite clearly this year during the .

However, if some musicians in Georgia have been known to use their public profile to ridicule both government and opposition politicians alike, and while there is at least one musician in Armenia who has taken a stand following last year's disputed presidential election, the fusion of politics and music seems most prolific in Azerbaijan. Since last year, this has become most obvious in the form of rap music with at least two bands openly campaigning for democracy and human rights in the country.

For the 2008 presidential election in the oil-rich authoritarian country, Shirband wrote a song to accompany a civic initiative to promote a virtual imaginary candidate, Shiraslan, and to attract the protest vote. True, the incumbent, Ilham Aliyev, emerged victorious with a staggering 87 percent of the vote, but the point was made. Even if music had rarely been used to push for democracy and human rights, precedents were somehow being set in Azerbaijan.

For the third anniversary of the OL! Azerbaijani Youth Movement founded by , Shirband had already composed and recorded a rap anthem, "OL Azad" (Be Free). Since then, other songs such as "Fuck" decry corruption and authoritarianism in the country while their latest, "Davam edir 37," is dedicated to Hajizade and Emin Milli currently being tried for "hooliganism" in what many consider to be a politically motivated trial to silence critical voices among progressive youth.

Hajizade's girlfriend and another prominent member of the OL! Azerbaijani Youth Movement, Parvana Persiani says the song contrasts the situation in today's Azerbaijan with that in the former Soviet Union at the time of Stalin's purges. "1937 continues even more strictly," she says, paraphrasing the song's lyrics. "It's more serious with the oil and gas. Youth are being arrested and we can always feel these black jeeps following us..."

The situation is very different in neighbouring Armenia where the last rap band which many hoped might speak out for disenfranchised and disenchanted youth in the country not only supported a pro-government party run by the country's main oligarch during the 2007 parliamentary election, but also wrote a song for its campaign. Meanwhile, with the notable exception of Mher Manukian and one anti-war song by the Gyumri-based Bambir, rock musicians in Armenia have steered clear of politics.

Joining their rap counterparts in Azerbaijan, however, two rock bands have not been afraid to lend their names to emerging progressive youth movements by writing anthems for the Dalga (Wave) youth group. "There is fire burning in our souls, there is protest on our tongues, let the tired faces smile, tomorrow is in our hands, let our students and youth, be a beacon for ancient East, let us arm ourselves with love, so that victory is ours," the lyrics of one song - "Dalga" by OZAN -- translate as.

Formed in 2005, band member Nurlan Kerimov says that while the rock music scene in Azerbaijan remains quite small, it is growing. "OZAN is always on the side of progressive youth," he says, adding that the band is currently composing a song about Hajizade and Milli. "We have very good relations with progressive youth and idea of anthem for Dalga was ours. I believe rock music can change the minds of youth."

Of course, the authorities are also well aware of the potential for change that alternative music brings with it. Last month, for example, one Azeri newspaper reported that fans of another rap band, H.O.S.T Alliance, were being intimidated by national security service agents in the Azeri exclave of Nakhichevan. Fifteen youth were detained for eight hours by National Security Ministry operatives and instructed not to listen to the band's music which they reportedly claimed was "subversive."

The band too has not been spared from unwanted attention from the authorities. Although it released its first album in 2007, H.O.S.T Alliance has not been able to sell it openly in Azerbaijan. Instead, the music has been distributed freely from person to person. H.O.S.T Alliance too has also been detained and warned not to write any more "anti-State" songs while the police are known to demand fans they encounter delete the band's music off their mobile phones.

Even so, like Shirband, OZAN, Qara Dervish and others, it continues to compose and perform music, with fans making their own videos for uploading to YouTube. Indeed, if contemporary youth culture and progressive pro-democracy movements are anything to go by, Azerbaijan remains ahead of the two other South Caucasus republics. And while the situation in the country is considered more authoritarian than its neighbours, it remains to be seen when similar trends take hold in Armenia and Georgia.

And while music in all three republics continues to be dominated by those singers and musicians who are subordinate to nationalist or predominant political interests, alternative music in the South Caucasus might yet result in a significant paradigm shift among a new generation of youth 18 years after independence was declared from the former Soviet Union. For now, however, and especially combined with alternative methods of distribution such as the Internet and mobile phones, all eyes are on Azerbaijan.