Jazz, the music of freedom surviving the USSR 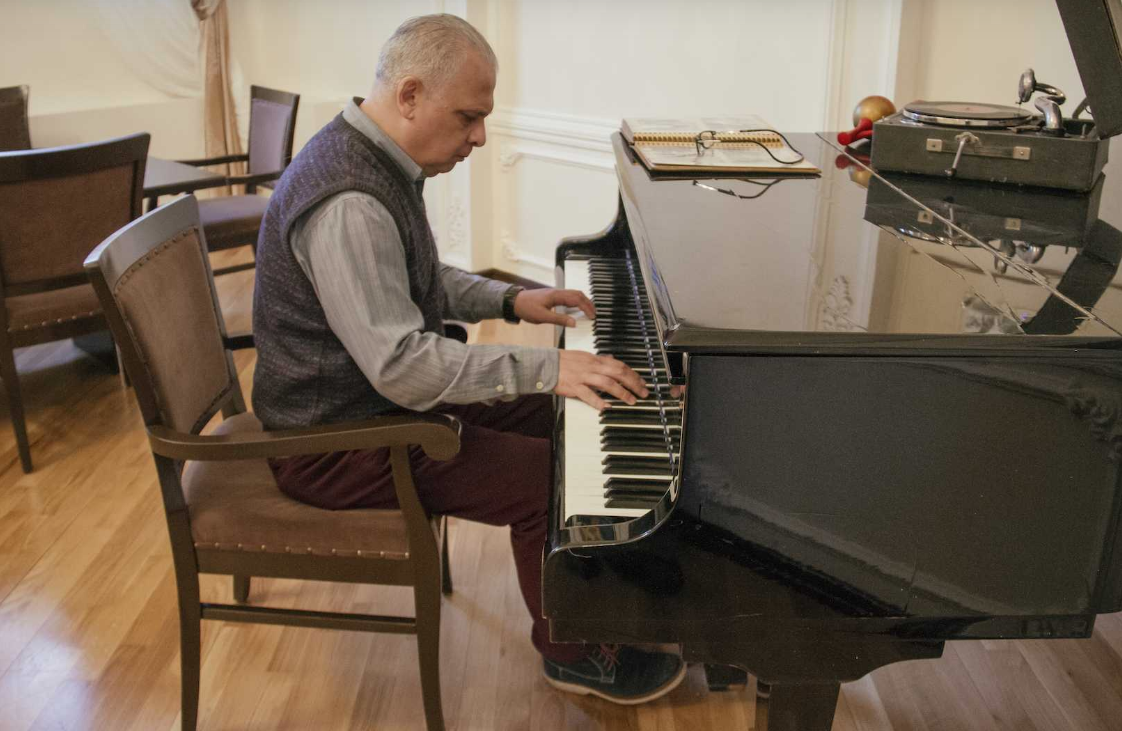 Nothing would suggest a local jazz tradition in Azerbaijan. Yet it is a genre that has developed, from the 1920s onwards, despite the Soviet period and the difficulties of the transition

It sounds improbable. A genre that originated in the United States with deep roots in Africa’s musical tradition, jazz has rarely been associated with Azerbaijan. Yet a fusion of traditional American jazz and folk music has a longstanding history in the Caucasus nation and it has become part of the national culture.

From the end of the 1920s jazz took the music world by storm, but it was outlawed in the Soviet Union for decades, as jazz musicians were considered counter-revolutionaries and anti-Soviet. The 1960s provided some relief - by then Baku had become a jazz hub in the Soviet space, alongside Moscow, Tallinn, and Vilnius - and Azerbaijani musicians had developed their own unique sound.

Salman Hüseyn oğlu Qəmbərov is one of Azerbaijan’s living legends in jazz.  Born in 1959 to a family of players and singers, for Gambarov, music was bread and butter from a very early age. Trained as a classical pianist and a graduate in musicology and composition of the Azerbaijan State Conservatoire, he developed his jazz passion on the side as studying the genre was a privilege for a few. The first recognition as a composer came in the dying years of the Soviet Union - in 1987 his first piano composition, “Variations for fortepiano,” was awarded the first place at the All-Soviet competition in Moscow.

“This was my first ever piece and it was so successful, he gave me strong motivation,” he recalls. At the beginning, the ride was not smooth. Just like many of his contemporaries, Gambarov would spend hours listening to the radio and reproducing the music on the piano.

“Voice of America would broadcast jazz sessions every Wednesday, Friday and Saturday from 10.00 pm to 1.00 am. I would stay late and listen to all of their jazz programs.”

“And the vinyls of course,” he adds. “They were brought in from Socialist countries, like Hungary, East Germany, Bulgaria, and especially Poland which boasted the strongest jazz tradition in eastern Europe. The first contemporary jazz I had ever listened to was Polish. The ones that would occasionally come from America were sold under the counter and were super expensive, like 80 rubles per vinyl; back then it was big money [average salaries were 150 rubles]. Then there were the tape-recorders. I got mine very late; it was a gift from my father the first year of university. That is why my information [about jazz] was so limited.”

Rafiq Babayev and Vagif Mustafazadeh, were widely regarded as the fathers of the Azeri jazz tradition; they had the same approach - “they would listen and reproduce the play of American jazzmen.”

Yet Gambarov firmly believes in the importance of studying academic music, music history, its different forms and the directions to understand how the contemporary music has reached its current shape.

The fortunes of jazz music in the USSR changed depending upon the political climate - while on one hand it represented the oppressed African Americans working class, hence it could be seen as “a proletarian art” - on the other, for this particular reason, it evoked personal freedom and spontaneity as dictated by one of its main characteristics, improvisation. Therefore, Soviet officials always eyed it as a threat, yet were often indecisive whether to ban it or not.

Jazz crept into the USSR’s musical world in the 1920s and in 1928, Alexander Tsfasman’s band - the Moscow-based AMA-jazz - was invited to play at a radio studio for the very first jazz broadcast of the USSR. Tsfasman’s ensemble was an inspiration for the early Azeri jazz musicians. In the 1930s, Niyazi Zulfigar oglu Tagizade Haijbeyov, widely known simply as Niyazi, and Tofig Guliyev created the first local jazz band in Baku. Censorship grew in the 1930s and 1940s, Maxim Gorky called jazz the “music of fat people.” Interestingly, in Nazi Germany, Hitler had also banned jazz considering it an inferior art form.

At the same time, officials were concerned that jazz might move underground and harm the system, so a few concessions were made. In 1936 the State Jazz Ensemble was established with Stalin personally in charge, while salaries of jazz musicians were increased to prevent them from spying for the West.

It was short-lived prosperity. Come the Cold War, jazz became again “an Americanism,” it was black listed, the saxophone was banned, and jazz musicians disappeared. Literally. Among the casualties was Parviz Rustambekov, a talented Azerbaijani saxophone player who ended up being jailed for alleged links with the United States and died in 1949, at the age of 27, in circumstances to date still unclear.

Stalin’s death in 1953 brought fresh oxygen. The “thaw,” as the decade is called, saw the economy growing, and the magic of television spreading rapidly.

“It was like a new dawn, after long years of limitations, people were hungry for jazz. Still, private organizations were not allowed to organize jazz events, it was a privilege of the Komsomols [a youth organization controlled by the Communist Party]” recalls Gambarov. Authorities would dictate how the genre should developed, yet jazz still was introduced at the Moscow State Conservatoire, and ensembles were formed, clubs mushroomed, and festivals began to be held.

In Baku, which had emerged as a safe haven for jazz players, musicians developed a unique sound blending jazz with mugham, a traditional Azeri musical form characterized by a large degree of improvisation in singing and playing. In the 60’s, the big 3-5 member ensemble gradually replaced large bands. One of them was the Qaya, a quartet set up in 1961 with Rauf Babayev, which played for about 25 years.

In this renaissance, the talent of Vagif Mustafazadeh, a virtuoso pianist, composer and connoisseur of Azeri folk music  emerged. Mustafazadeh shot to fame in 1967 when he won theTallinn Jazz Festival and he went on to collecting praises from legends like B.B.King, Dizzy Gillespie. Mustafazade died of a heart attack after a concert in Tashkent, Uzbekistan, in 1979, right before a decade which saw jazz blossoming throughout the USSR.

Then came the 90’s and suddenly there was no more Soviet Union and hardships took over people’s lives.

“But I never stopped playing, even during the hardest times,” recollects Gambarov. “Many musicians abandoned music and switched to doing business. But I never did that, music remained my main purpose in difficult times. Music, and jazz in particular, never forgive betrayal. As if it says, “if you leave me once, don’t ever come back.” In 1994 I was close to moving to Turkey, my documents got lost on the way and I couldn’t go. I was lucky, because the next year everything changed. As soon as we signed the “contract of the century”  [for oil exploration in the Caspian Sea] many foreigners started coming to Baku.”

The oil boom that followed changed the face of the country and gave jazz a new impetus. “I remember that all the clubs were busy seven days a week, musicians were paid $25 per hour, it was great money then. In one day you could earn enough for the weekly food supplies.” In 1996, Gambarov founded the Bakustik ensemble.

Time has changed, yet in Soviet times, like today and through the 1990s, jazz is not a genre of music for everyone.

“It is not a genre for masses, but rather the music of intellectuals, a very intimate music.” And making a living out of jazz is hard and jazz players turned to more popular genres and play at ceremonies, weddings, and TV shows as well as performing in jazz clubs.

A regular guest in jazz festivals around the world, Gambarov is an advocate of state support for the arts and music -  the Baku International Jazz Festival, an annual event since 2002 which attracts thousands of jazz aficionados and musicians from all the world, stopped receiving government funds in 2015. In 2016 various embassies joined forces, inviting musicians from their countries. Yet the lack of a central organization for setting criteria for those who are invited has affected the overall quality of the event.

“When the economy is struggling, art is the first to suffer. This was a unique opportunity for Azeri musicians, they had the chance to choose and perform with any musician, even big names like Jeff Ballard. The Ministry [of culture and tourism] would invite first-class musicians, imagine what a boost of energy this was for us, because only when you perform together with outstanding musicians you can grow. Historically, pianists were the strongest musicians in Azerbaijan, like Babayev and Mustafazade, yet pianists alone are not enough. You need at least a percussionist and a bassist for the smallest band.”

Gambarov remains cautious about labeling Baku as a jazz capital too quickly. “There is great potential, but we need more jazz clubs, more concerts outside the scope of the festival to rightfully call Baku a jazz city.”