A multiethnic orchestra with artists from different parts of the Caucasus; their dreams of performing in the tormented region and of demonstrating the possibility of peaceful coexistence. Our interview.

In their documentary Grozny Dreaming, Swiss directors Mario Casella and Fulvio Mariani follow the tour of the Caucasian Chamber Orchestra, presenting the musicians' lives, and the joys and challenges of a musical project difficult to carry out in a region plagued by war and conflict.

The Caucasian Chamber OrchestraThe Caucasian Chamber Orchestra was formed in Tbilisi in 2005, at the initiative of the German conductor Uwe Berkemer and it comprises excellent musicians from different parts of the region. The musicians have a great dream: a concert in the Chechen capital of Grozny. The film is a diary of the musicians' journey, from rehearsals to concerts in some of the most isolated places in the Caucasus, entering even into the houses of some of the musicians in order to tell their lives and their hopes for their land.

Mario Casella, can you tell us what inspired two Swiss directors to film a group of musicians who live in the Caucasus?

There are two motives. The first motive relates directly to my professional profile; I am a director but also a journalist. I have always dealt with foreign politics and, in particular, with the Balkan countries and the Russian Federation, a region that greatly interests me. The second motive has to do with the region's mountains: both Fulvio and I are passionate alpinists. In the past, we have done films on mountains, not only related to alpinism but also culture. The road has taken us to the Caucasus and we fell in love with the landscapes and the intact valleys.

The film was made in 2007, that is, before the Russian-Georgian conflict of last August. What is happening now with the Caucasian Chamber of Orchestra?

Unfortunately, the news is not good. The last Georgian crisis happened about the same time the film was released. At that time, the orchestra was in Europe, in Venice and Verona, for the film presentation tour and concerts. Some of the musicians could not return to Georgia because they had Russian passports; their return home became much more difficult.

The orchestra did not dissolve but they no longer have the status of a permanent orchestra, which means the musicians do not receive regular salaries. There is a lack of financial support. In this crisis, the orchestra had to interrupt its regular activity. Now the musicians only meet for specially scheduled events.

In the documentary, the orchestra goes on a journey. What is its route, where does it start from and where does it end? What is the meaning of this journey? 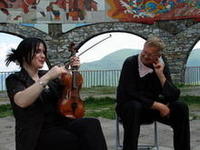 Watch the trailer of Grozny Dreaming

The initial idea was to do a peace tour across the Caucasus; visit as many countries as possible, both in the south and the north of the region. The film follows the movement of the orchestra and describes the difficulties in travelling in different countries. The orchestra could not visit some countries and therefore we followed the conductor. He unsuccessfully tried, in Azerbaijan and Abkhazia, to negotiate with authorities for permission to perform. The final goal was to conclude the tour across the Caucasus with performances in the places that symbolize the Caucasian conflicts, such as Grozny and Beslan. It was not possible to perform in Grozny. In the film, we explain why it was not possible to play there and how Chechnya is still an open issue.

Could the film be defined as a road movie? What were the major challenges in the production?

There are two narrative levels in the film. The first level follows a classical documentary technique of telling the stories of these musicians. We film their everyday lives. For example, we show the difficulty of living in Tbilisi for a Russian musician married to a Georgian, or the troubles of a Georgian who can not exit his country. None of this is related to the road movie style; however, afterwards, when we follow the orchestra on the bus across the Caucasus, the road accompanies the narration.

The major challenges involved logistics, organization, and bureaucracy. Doing a movie with an orchestra that has to travel across the Caucasus is much more difficult than in Europe, where border controls no longer exist. Also, there are the unknowns. Until the last moment, we did not know if we would be accepted or rejected in some of the countries. We were surprised both by some of the receptions and rejections. For example, we managed to play just a few kilometres from Tskhinvali and beyond the last Georgian military checkpoints.

The film contains images of the conflicts that have plagued the Caucasus over recent years. What is their meaning in relation to your story?

There is definitely a didactic and explanatory aspect, because current problems in the Caucasus cannot be understood without considering history. To better understand the origins of the problems and of the utopia promoted by the orchestra, we provide a historical perspective.

Has the film been released in Switzerland?

Yes, the film is already showing in the Italian part of Switzerland, and soon will start showing in the German and French parts. The film has been selected for screening during the Solothurn Film Festival, the most important cinema event in Switzerland. We hope to soon find a distributor in Italy.