In the name of the holy pipeline

Azerbaijan: autocracy, before and after the referendum 29/09/2016 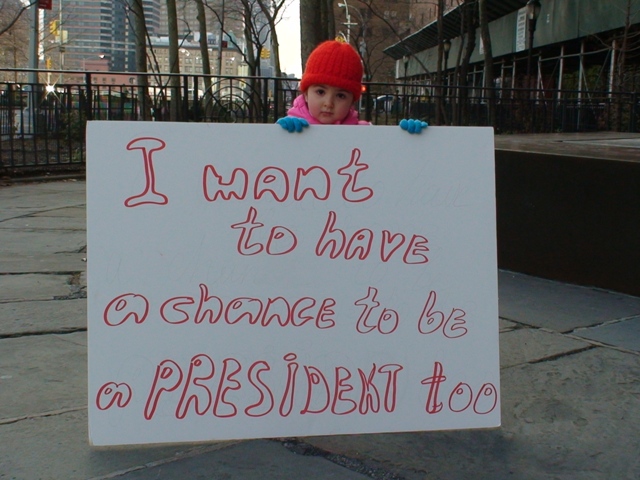 In Azerbaijan the government has proposed a referendum to lift the two-term presidential restriction and introduce other changes that would undermine fundamental tenants of the country's Constitution. A ban on foreign broadcasting and the conviction of prominent journalists consolidate state control over media and free flow of information

Azerbaijani students studying abroad have picketed the Azerbaijani embassy in Washington, D.C. and the republic's UN representative in New York this week - the first such protest since Azerbaijan's regained independence. The crowd, albeit modest, signaled a remarkable turning point for Azerbaijan, an oil-rich state that has invested significant resources into controlling major information outflow and lobbying the interests of the ruling elite abroad.

These student protests echoed a much wider civil movement, stretching from the US to the Caucasus, which is challenging recent state-building trends in Azerbaijan. Growing dissent focuses on a ruling party proposal to lift the two-term presidential restriction which, opponents say, undermines fundamental tenants of the country's Constitution. In spite of the country's declared commitment to European Union accession, on 18 December the joint seating of the Parliamentary Commissions reviewed a referendum proposal by the ruling party YAP (New Azerbaijan Party) to amend the Constitution and lift the current two-term presidential restriction.

In addition to lifting the presidential term restriction, the proposed referendum would, if successful, permit "a delay of elections in the situation of war" and allow for prohibition "without notification" of filming, photography or recording of persons. A successful referendum could also remove the right currently enjoyed by civil groups to initiate legislation with an effort backed by at least 40,000 citizens. Leaders of the major opposition parties and human rights activists have appealed to the Constitutional Court not to approve the proposed referendum. They say such amendments would contradict international law, the Constitution of Azerbaijan and damage the very foundation of Azerbaijan statehood.
Despite these protests, on 24 December the Constitutional Court, in a rather predictable move, approved the draft act on the referendum entitled: On Amendments and Changes to the Constitution of the Azerbaijan Republic. The approval was followed by a parliamentary decision on 26 December conduct the referendum on 18 March 2009.

Seemingly incongruous with Azerbaijan's asserted commitment to Western integration, a proposal to make such a substantial change in the Constitution indicates a trend toward the East rather than the West. For many, it was clear that the "rentier" elite, whose status and wealth are also tied to the current president, would hardly trade its privileged position for a democratic and rotating presidency.

In response to the decision of the Parliament and Constitutional Court, movements from Azerbaijan civil society and opposition parties have submitted appeals, made statements, picketed and created initiative groups, movements and communications committees aimed at both canceling the referendum and, they say, saving the republic. In alliance with prominent political and civil leaders, the Musavat Party, followed by the Azadliq block, which consists of parties not represented in the parliament including the Popular Front Party, Liberal Party and Democratic Party, have established efforts to defeat the referendum. As monopoly on resources has, so far, allowed the authorities to manipulate any popular vote - whether in elections or referendums - the outcome of the referendum, in the case of its implementation, can be easily predicted.

The Election Monitoring and Democracy Studies Center (EMDSC), a local NGO, stressed that the proposal was not discussed publicly and was submitted to the Parliament without public knowledge. The group said the proposed constitutional amendments could pave the way "toward the political hegemony." The same group also noted that some of the proposed amendments violate basic articles outlined by the Azerbaijan Constitution including the rights of freedom of information and freedom of expression.

Especially in the context of the upcoming referendum, many observers interpret the recent decision to ban foreign broadcasting (including Radio Free Europe/Radio Liberty, the BBC and VOA) on the FM frequency, effective from 1 January 2009, as aimed at silencing opposing voices. One of the suggestions is that the ban is linked to the upcoming "deal" between the foreign actors and the current authorities on the Karabakh issue. The decision to ban foreign broadcasting caused a wave of statements from the officials of the UK and the USA expressing regret and concern about the prohibition.

Azerbaijan's oil and gas resources, largely seen as alternative sources for Europe and the US, are growing in importance, as is its value as a transit country. Simultaneously, a large inflow of oil revenues has a marked correlation with a consistent trend towards greater restriction of freedom of assembly and freedom of media.

The independent media, although it has not enjoyed full freedom since 1993, has been experiencing the worst suppression since the dynastic transfer of power from the late president Heydar Aliyev to his son, Ilham Aliyev, in 2003.

The case of Elmar Huseynov, late editor of the independent journal The Monitor shot dead in front of his apartment in 2005, still remains unresolved despite the fact that the names of the killers were made public.
The attacks and violence against journalist continued into 2006. A correspondent for Azadlyq newspaper, Fikret Huseynli, was attacked in March while, in May, the editor-in-chief of the Bizim Yol Baheddin Gaziyev newspaper was kidnapped and beaten. On 23 June 2008, Mirza Sakit, a well-known satirical poet who wrote for a few popular newspapers known for their criticism of corruption and high ranking officials, was arrested for illegal possession of drugs. He was imprisoned for three years.

Eynulla Fatullayev, editor-in-chief of the newspapers Gundelik Azerbaijan, an Azerbaijani language newspaper, and Realni Azerbaijan, a Russian-language newspaper, was convicted in court three times between September 2006 and October 2007. The last conviction was on charges of "terrorism" (linked to an article which he wrote that was critical of government officials), "inciting ethnic hatred" and "tax evasion." Fatullayev was sentenced to eight and a half years in prison. In the opinion of his attorney, Isakhan Ashurov, the charges and conviction were reciprocity for an investigation Eynulla Fatullayev was conducting into the murder of his former colleague, The Monitor's editor Elmar Husseynov.

Ganimed Zahidov, the editor-in-chief of the popular opposition newspaper Azadliq, was arrested in 2007 and sentenced to four years on charges of hooliganism. The most recent case of violence was a police attack on Yeni Musavat newspaper correspondent Afghan Mukhtarli who was reporting on the opposition protest on 7 January 2009. Numerous criminal cases, including libel and "insult of honor and dignity" lawsuits, have been filed against newspapers and journalists, mainly by bureaucrats. The fines of such lawsuits are usually ruinous for the newspapers.

The ban on leading US and British broadcasters seems to be the logical continuation of a consistent policy of establishing control over media and free flow of information which, under Azerbaijan's current conditions, is key to maintaining full control over the political sphere. In an environment in where the opposition's activities are restricted due to the ruling elite's monopoly on resources and the absence of freedom of assembly, the free media seems to be a main target of pressure. Alsee L. Hastings, Chairman of the Helsinki Commission of the US Congress, expressed "deep concern" regarding the decision to ban foreign broadcasting and said that Azerbaijan-US relations will be negatively affected. 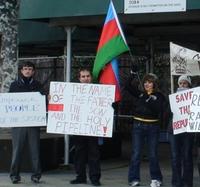 While a sense of impunity stemming from enormous oil and gas revenues and foreign policy agenda priorities of the foreign partners may seem to be the primary cause of the trends towards greater restriction of freedoms, the trend can also be traced back to a deeper underlying insecurity. The global financial crisis, a significant drop in world oil prices and an administration change in the US may have shaken the status quo of the elite which has prospered on a resource-based economy.

The posters of the protesters at the rally in Washington, D.C., and New York, inscribed with such phrases as "In the name of the father, the son and the holy pipeline", indicated a public awareness of the connection between the sustainability of political power and the country's riches. In spite of the predictable outcome of the referendum, a three year old girl at one rally, a young symbol of the survival of democratic traditions, held the poster with the words "I want to have a chance to be a president too." So too are investigative journalists and opposition and civil society movements symbols of an enduring struggle for freedom and liberty which is not for sale, even in the face of all the riches aimed at buying off political and social support.