Azerbaijan: autocracy, before and after the referendum 29/09/2016 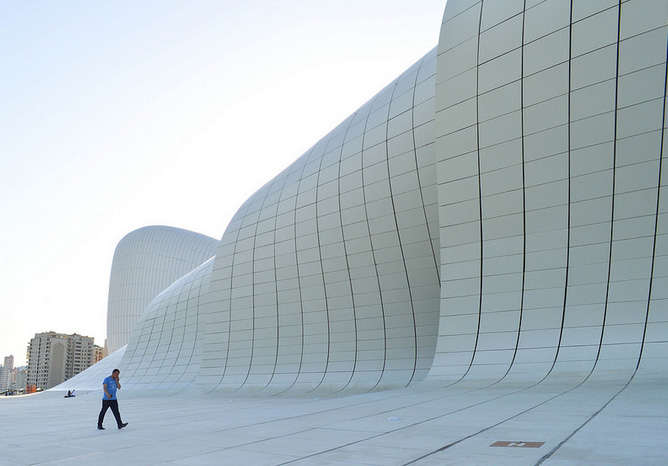 Attempts to strengthen the regime in Azerbaijan: a forthcoming referendum aims to prolong the presidential term and to lower to 18 years the minimum age to be elected President

On September 26, Azerbaijan’s more than 5 million eligible voters will head to the polls to cast their votes in a countrywide referendum. This will be Azerbaijan’s third constitutional referendum in the country’s brief history of independence. Just as it has been in the previous two ballots, there are plenty of controversial proposals in the upcoming referendum as well.

The referendum will be held in the midst of an economic crisis and in view of a possible third devaluation of the national currency.

Shortly before his death, in 2002, Azerbaijan’s then president Heydar Aliyev (father of the current president, Ilham Aliyev) introduced a number of constitutional amendments.
The most notable one was transferring the power to act as interim president to the prime minister, a position which would have been occupied by his son shortly after the entrance into force of the amendments.

Among the other changes introduced back then, new amendments dismissed the proportional electoral system; reduced the number of votes required for the election of president to simple majority; and gave the public courts the power to ban political parties, a function which was previously assigned to the Constitutional Courts. All the amendments proposed in 2002 passed with 97 percent majority vote, despite the violations and mass fraud denounced by international observers. “Reports have included ballot stuffing, overt police presence, and pressure on voters, multiple voting, use of supplementary voter lists and other forms of ballot rigging”, wrote the Organization for Security and Cooperation in Europe (OSCE).

Seven years later, in 2009, Ilham Aliyev - who had meanwhile come to power in 2003, in what international observers described as contested elections – called for a referendum to abolish the limits preventing the unlimited re-election of a President.

Now, another seven years later, incumbent Aliyev is determined to introduce some new changes. The first proposal is to extend the presidential term limit by another two years, from 5 to 7 years. Moreover, the proposed amendments would introduce two new leadership positions - the “First vice-president” and the “Vice -president”.
According to this provision, it's up to the "First Vice-President" to replace the President if the latter is unable to perform his duties. First, as a result of the 2002 reform, this role belonged to the prime minister. The draft amendment also stipulates that vice presidents shall be chosen by the President - unlike post of the Prime Minister, which requires a parliamentary approval - and shall enjoy immunity throughout their term. The prime minister shall maintain the executive power only in case the vice president fails to executive his/her responsibilities.

As foreseen by another of the amendments introduced, the President would have the power to dissolve the parliament and call for early elections. The minimum age for being elected to parliament will also be lowered from 25 to 18 years, while the minimum age limit for presidential candidates will be eliminated. Currently, Azerbaijan’s constitution requires all candidates for presidential seat be not younger than 35.

According to the Election Monitoring and Democracy Studies Center , the proposed amendments will also “remove the guarantees for property rights in a country, Azerbaijan, with very fragile property rights already. New amendments stipulate social obligations for private property and the state can limit the property rights for ‘social justice and efficient use of land’ purposes”.

Controversial for some, sign of rapid development for others

Needless to say, shortly after the news of proposed amendments reached the public scrutiny, concerns were raised.

Igbal Agazade, former parliament member and head of the political party “Hope” said there was nothing positive in the proposed amendments. “This referendum only serves to strengthen the president as an institution and weaken all [other] government branches”.

Former political prisoner, and the head of the Election Monitoring and Democratic Studies Center Anar Mammadov noted that it would go against international election principles to amend the length of the presidential term, especially because Azerbaijan is already a Presidential Republic. “Increasing presidential powers in a country that is already run by a president will only strengthen his/her hegemony. And in general, shifting to a seven year term can only be seen as a way to strengthen authoritarian tendencies”.

Government supporters however disagree. Safa Mirzayev who heads the National Parliament argued there was simply not enough time to tackle all the issues under the current presidential term. “Today’s demands are higher [...] There are so many things to be done that 3, 4, or 5 years are simply not enough […] And this is why we have to extend the presidential term limit”. Similarly, Siyavush Novruzov, deputy executive secretary of the ruling New Azerbaijan Party contends that, because the country holds elections over three consecutive years [presidential, parliamentary, and municipal] and because it takes a year to prepare for each election, it is necessary to increase the presidential term.

Perhaps the best commentary however came from Ali Ahmadov, assistant to Prime Minister and executive director of the ruling party. Ahmadov defended the lifting of age limit by citing examples of great leaders from world history. “I can remember Alexander the Great, Shah Ismayil Khatai, and Napoleon. All three came to power at a very young age and achieved great things. Shah Ismayil was only 14, Alexander the Great 20, and Napoleon just a little older than that when they took over. It is impossible to imagine history of mankind without them”. “That is why”, explained Ahmadov “I do not see anything extraordinary in lowering the age for presidency to 18”.

In the meantime, Azerbaijan’s opposition decided to boycott the referendum withdrawing its plans for any campaigning. The political movement Republic Alternative (ReAL) claims they won’t participate in the campaigning process given government pressure against them. On August 12, one of the founders of the movement, executive secretary and one of the country’s most notable economy experts Natig Jafarli was arrested and sentenced to four months of pretrial detention on charges of illegal business and abuse of official powers.

Already, the movement’s chairman, Ilgar Mammadov has been in jail since February 2013. Mammadov was arrested during protests in Ismayilli region of Azerbaijan. He was sentenced to seven years in jail in March 2014 on charges of organizing mass disorders, and resisting authority, which many international observers and critics at home considered false.

On August 27, the country’s opposition party Musavat, took a stance against the referendum. The head of Musavat party, Arif Hajili, said that “the authorities just confirmed their intention to hold this referendum in secret as if it was a theft operation. But this won’t deter us. We will double our efforts with mass rallies and observation [during the day of the referendum]”.

But this can happen only if there will be activists of the opposition to the current government who are not behind bars. Indeed, weeks ahead of the referendum, the government of Azerbaijan has launched a new wave of crackdown. Aside from the arrest of ReAL member Natig Jafarli, a number of activists of the youth movement N!DA have been detained and later released. Elgiz Gahraman, member of N!DA, was arrested on August 13 and sentenced to four months in pretrial detention on charges of drug possession. On August 18, Fuad Ahmadli, member of the opposition Popular Front, was accused of abuse of power and put in pretrial detention. He has not been allowed to see his family members not to receive phone calls. Another Popular Front member, Gadim Bakirov, was arrested on August 18 and also sentenced to 25 days in administrative detention. On August 24, police arrested Karabakh war veteran and member of Popular Front Ismayil Rasulov and sentenced him to 30 days in administrative detention on the grounds of resisting police. Others have been detained, while their cases are pending.

In the meantime, following the failed military coup in Turkey, the government of Azerbaijan announced its decision to track down all supporters of  movement in the country by launching a criminal case to investigate the promotion of Hizmet movement in Azerbaijan.

Some of the above mentioned names have been already linked to Hizmet movement with police claiming to have found literature describing teachings of Gülen in their possession. In the meantime, the government transferred the management of Caucasus University, Azerbaijan’s first private university founded by the supporters of Gülen, to the State Oil Company (Socar). In a similar act, Azerbaijan shut down 13 education centres and 11 high schools in 2014, following the outbreak of the conflict between the then Turkish Prime Minister Erdoğan and Gülen. All these education establishments including the university have now been transferred under the managed of Socar.

In addition to the persecution against schools and activists, Zaman Azerbaijan, the newspaper linked to Gülen, was also shut down. A similar fate hit the Azerbaijan News Service (ANS), shut down after airing an interview with Gülen.

The recent wave of crackdown leaves Azerbaijan’s already weakened civil society questioning the country’s democratic future or any future as a matter of fact. While the government pardoned a number of key political prisoners in March of this year, the country’s list of people detained on political grounds is still very long.

The hope for a better future is weak while the ruling elite pushes the country into waters where the storm is imminent.