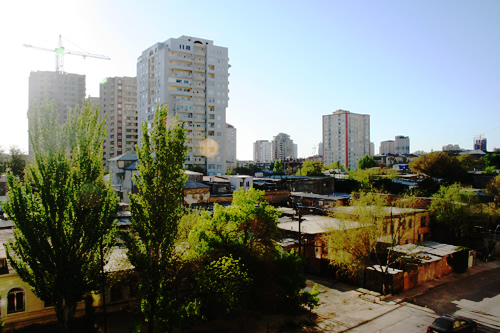 A construction boom is dramatically transforming the urban face of Azerbaijan's capital city, Baku, yet questions are being raised about the sustainability of the process, especially where historical districts are concerned

Situated on shores of the Caspian Sea, Baku, the capital of Azerbaijan, has seen a boom in the construction sector in recent years. This boom has inevitably led to dramatic changes in the city's urban development, transforming the old Soviet city into a hub of high-rise, mixed-use buildings. But it is questionable whether, in the midst of this chaotic construction boom, any of the basic principles of urban planning, protection of historical buildings, or overall supply/demand analysis have been taken into account.

The boom in investments in the real estate sector in Azerbaijan (most of it taking place in Baku) began approximately eight years ago, with numerous international, as well as local companies, coming to the country to actualize their grand real estate projects. In time, new developments in the real estate sector paved the way for other infrastructure projects such as construction of new bridges, roads, and road expansions to ease traffic congestion.

It is almost like Baku - a city of more than 2 million inhabitants - has turned into one big construction site; every day, while walking or driving around the city, one can witness mass construction or renovation projects everywhere.

However, while investors and the nouveau riche of the capital see the boom as a positive sign, not everybody seems to agree, especially local residents who have lived in the capital their whole lives. Many, for example, point out that the construction fever of recent years has not seriously taken into account the fact that Baku is situated on an active seismic zone.

Another issue concerns the lack of any urban planning or any overall development plan for the city. In fact, there is no master plan. Simply put, urban development has been anarchic with no clear objectives, goals or any SWOT (strengths, weaknesses, opportunities, threats) analysis.

Over the last two years, the government has promoted widespread renovations of the old buildings in Baku, especially of the ones facing main streets and avenues. A residential complex not far from where the writer lives was also part of this cleaning spree. Soon after the renovation projects were completed, though, local authorities suddenly decided that the buildings were no longer safe to live in and ordered them to be destroyed.

New residential or business skyscrapers are often built very close to one another or to already-existing buildings, something that draws much criticism from residents who complain about the proximity of the buildings and regard it as a violation of their privacy.

Some residents are given short or no notice whatsoever of the demolition of their houses. The unhappy residents are also dissatisfied with the compensation provided by the authorities.

“This is not a government house, it is my own private property,” said one resident living in the city center whose house was about to be demolished. “They are giving me $1,500 USD per square meter (a place downtown starts from $100,000 and can go up to half a million.) How can I buy a new flat with this money? Yes, one can demolish a house, but with one exception, provided, there is adequate compensation for it!”

Residents’ complains are left unanswered by the city's executive authorities. According to a lawyer with the Islam, Democracy and Human Rights Center, the organization has received over 300 complaints from just one residential district. Most of the complaints regarded misuse of property laws and violations of civilians' legal rights.

The fate of the Old City

The fate of the Old City (also known as “Icheri Sheher”) is also up for debate. A number of old buildings have already been demolished and replaced by small boutique hotels or office buildings that have little in common with the traditional aesthetics of the place, especially given that the area has been under UNESCO’s protection since the year 2000.

Some of the residents who live there are overwhelmed by the prospect of being forced to move out of their homes sooner or later. Many inhabitants of the city can hardly recognize the city where they grew up. And while the new, brightly-lit up Baku can be enjoyable at night, one cannot say the same for Baku during the day. Parks have been altered and old monuments have been demolished and replaced by either flag poles, fountains, or statues of late president Heydar Aliyev.

Given the pace of construction work and growth in country’s economy, it looks like Baku's face will continue its rapid change, and soon much of the old Baku will be replaced by a new one. The question is, will the authorities ever realize the importance of preserving the city’s rich history, or will they choose to make a new one?