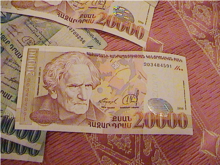 After years of economic growth that surprised many, the global financial crisis finally hit Armenia early last week forcing the Central Bank to devalue the local currency, the dram

As if in expectation, mobs of people were already becoming a frequent sight outside many banks in the Armenian capital, Yerevan, all frantically seeking to exchange drams into dollars. The authorities moved in swiftly to restrict such transactions.

However, on 3 March, the inevitable happened and in the space of a few hours the dram traded as high as 380-400 drams against the dollar before dropping to 360-70. Banks and exchange booths continued to limit dollar transactions and many shops shut for a few hours while owners assessed the potential damage and saw an opportunity to increase profits. Despite stocks being purchased before the devaluation, prices on many imported goods increased when they reopened.

Sugar, pasta, vegetable oil, rice, pharmaceuticals, cigarettes and petrol were particularly affected with prices increasing by 10-30 percent. Other items such as flour were marked up by over 50 percent while the price of butter jumped by 125 percent.

Two days later, the dram stabilized at around 360 drams against the dollar, but the 20 percent depreciation from its previous rate of 305 drams to the dollar caused alarm among much of a population reliant on remittances abroad and salaries paid in the local currency. As the money in their pocket lost its value, citizens stocked up on essential items.

The collapse of the dram soon became known as "Black Tuesday" as ripples of concern soon turned into waves of panic. Highlighting various deficiencies in a largely import-driven local economy, the main concern was speculative trading and other questions regarding the financial health of the nation resonated once again.

Indeed, the opposition had for months alleged that the dram's value against the dollar had been artificially strengthened by the Central Bank at the expense of $800 million in foreign reserves to benefit government-connected importers. However, according to the authorities, the reserve is only down $400 million from last September.

"I am deeply convinced that the country is simply descending into an abyss," said former president and leader of the extra-parliamentary opposition, Levon Ter-Petrossian, to thousands of supporters gathered in central Yerevan just a few days before the crash to mark the first anniversary of the 1 March post-election clashes which left 10 dead and hundreds injured.

"The current crisis will most probably be more severe and more difficult to overcome than even the crisis of the early 1990s, which occurred in a healthy global economic environment," he continued, predicting not only the collapse of the dram, but also skyrocketing unemployment and cuts in government spending. His words, no doubt, must have started to ring true to many.

Even so, many in international circles had been anticipating such a move. Speaking to Osservatorio Balcani e Caucaso just weeks before the collapse, one senior Western diplomat said it was only a matter of time. And while critics of the Armenian government understandably used the crash to validate earlier claims of economic mismanagement, officials and international financial lending institutions instead attempted to put on a brave face for journalists.

In a written statement, the Central Bank said that the devaluation would benefit local manufacturers as well as exporters while also encouraging job creation. If so, critics countered, why did it not happen before? Meanwhile, international financial institutions praised the move in exchange for the provision of $540 million in stand-by loans on top of $500 million already allocated by the Russian Federation.

However, while the World Bank also supported the move and stressed its benefits, local manufacturers were not as upbeat, stressing that competitiveness on the international market is limited by other factors. Blockaded by Azerbaijan and Turkey, export routes mainly through Georgia are already more costly and local production is also reliant on the cost of imported raw materials which will now increase.

Some also speculate that interest rates from local banks will also be raised and that the local economy will be hit by the continuing decline in remittances from migrant workers abroad, and particularly Russia. As some local businessmen speculated that the stated benefits brought about by depreciation of the dram would be offset by other realities, official Tbilisi then entered the debate.
"The Armenian economy virtually collapsed in a couple of weeks," Georgian President Mikheil Saakashvili said at the weekend. "Why did Armenia collapse? Because it had been completely dependent on the Russian market. The Russian market collapsed and the Armenian economy collapsed too." Yerevan was quick to criticize the remarks and linked them to increasing internal political pressure on the Georgian president to resign.

The coming weeks and months will tell whether Armenia is able to ride the economic crisis, but other warning signs have already appeared on the horizon. While layoffs are reported in key sectors of the economy such as the mining industry, inflation looks likely to increase. Initially planned at around 4 percent, it is now slated to rise to 8-9 percent.

The World Bank also believes that the country's GDP growth is likely to stand at zero percent for 2009 instead of the 9.2 percent initially predicted by the government. Others are even more pessimistic, suggesting that the country will enter a slight recession and that the dram will depreciate by a further 30 percent over the coming months.

On the other hand, some analysts suggest, increased momentum in the current process of rapprochement between Armenia and Turkey could act as another reason for opening the border between the two countries. Closed by Turkey in 1993 while fighting between Armenia and Azerbaijan raged over the disputed territory of Nagorno Karabakh, such a move could benefit both countries as the global crisis ushers in an uncertain economic future.