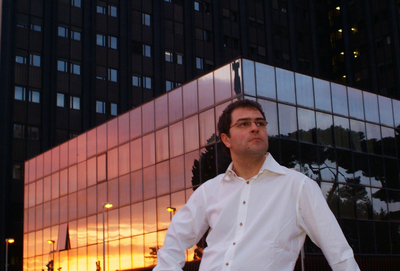 "Our desire for elsewhere was equal to our desire for otherwise." Young Albanian students, from the collapse of the regime to the mass exodus. An interview with Ron Kubati, a writer

Ron Kubati, an Albanian writer and journalist, was born in Tirana in 1971. He has been living in Italy since 1991, where he arrived with the mass exodus of young Albanians to the Italian coast, immediately after Albania's opening to the world. When the communist regime collapsed, he was a student in the Albanian capital, amidst the protests and the atmosphere of uncertainty, which reigned in those final days of the regime. He took part in the students' movement that took its first steps in December 1990, and witnessed the youth activism of that historical moment, inspired by catchphrases such as a "We want a European Albania" and "Freedom and Democracy". Those events became themes of some of his books. His novels, written in Italian, have received much literary acclaim in Italy.

At the end of the 1980s, you were a student at the University of Tirana. What was life like in Albania in that period?

From an economic point of view, the situation was a disaster. Albania, at the time, was similar to countries in Africa. Everything was rationed, the vitamins, proteins, etc. From a political point of view, communism has produced a structural error: it has invested in the creation of a new generation, much more educated and qualified compared to the previous ones. It was a generation which managed to see beyond the dictatorship, and which had other cultural and ideological beliefs.

How was the student movement created back in those days?

Despite the political situation, the youth of those days developed an awareness that distinguished them from previous generations, and that ensured that young people no longer identified themselves with the values of the past. In that period, the dictatorship was weaker by the day. A kind of bourgeoisie had been created - the class that held to power - which at the time cared only about its economic interest and the preservation of power. The rest of the country was drowning in abject poverty.

In such circumstances, many of those who started to express their dissent with the dictatorship did not denounce the crimes of the regime, but above all condemned the extremely difficult economic situation in the country. Profound resentment of the political class in power had emerged. This resentment was primarily motivated by economic reasons; it did not derive from young people's political awareness. Undoubtedly, many of that generation had not yet sufficiently developed political views.

The Berlin Wall fell in 1989. How was this seen in Albania? Was it possible to foresee the end of the regime?

With the death of Enver Hoxha in 1985, we expected some kind of change. Perhaps nobody expected a real collapse of the regime, which remained a dream, but people at least expected it would soften. When Ramiz Alia took power, after the death of the dictator, many projected their hopes on him. In reality, there was a certain opening at the end of the 1980s. However, everything took place very slowly and awkwardly. However, there was the impression that something was changing.

By that time, the student movement gains momentum and street protests commence...

We expected great changes, but everything took place very slowly. In January 1990, there was the rumour that a protest would be organized at Skanderbeg square. I remember we all went out, disorganized, everyone pretending to have a walk on the main boulevard, as if it was a regular daily walk. There were many arrests. Very strange rumours were going around; such as that something had happened in Shkoder or Kavaja. However, one could never know for sure if things were really happening or not. In the summer of 1990, there was the embassy crisis. People were hiding in the embassies as a way of fleeing the country. At first authorities stayed silent, but then the Communist Party took thousands of people, gathered from the countryside, to Skenderbeg square, to express solidarity with the Albanian League of Communists. I infiltrated the protest with some friends hoping to see if it would dissolve because of dissent. It did not happen. This was a great disappointment.

You got information from foreign media?

Yes, we listened a lot to the Voice of America and we watched Italian TV. We had radios running on our only brand of batteries, "Iliria". We took our radios to the beach in Duress in the afternoon, when the beach was empty, and we tried to tune in to the foreign channels and get information about what was going on. We hoped everything would change. Albanian TV continued with the regular rhetoric. However, slowly, interviews with future political leaders were appearing. Another signal that seemed very important to us was the departure of Ismail Kadare, who left for Paris that year. That turned out to be the final push. Albanian TV itself transmitted the news, which really had a great echo. An important actor of our culture had left the country. And, this took place only a few months before the December movement.

How was the December movement created?

In the summer of that year, Tirana was very calm. A rumour indicated that something would happen when the students would return to the dorms. Their protests began in December. Then, Tirana residents increasingly joined the protests. In the first days, the police reacted very aggressively. I remember that once we had to hide in private flats along the street in order to escape being beaten by the police.

Then, you left for Italy. Same as many other students from that December; only few of them remained in politics in post-communist Albania...

I dealt with this issue in my first novel. I thought about it a lot. During our protests, before the hunger strike of February 1991, it would happen that in the morning we would protest in campus, or were planning protests in Skenderbeg square, when the rumour would spread that ferries were coming to Duress to take us away.

Without a clear idea, many of us often protested in the morning and were trying to flee abroad in the afternoon. This double desire was quite diffused. From an emotional point of view, this was the same thing for us. I define this phenomenon with the terms "otherwise' and "elsewhere".

Our desire for elsewhere was equal to our desire for otherwise. The desire for the elsewhere was perhaps stronger because it was easier, more tangible, whereas the otherwise would have taken a long series of protests without a clear idea of the possible outcome. It was comical. Talking with friends, each of us had their own ideas of how to leave the country. We anyway wanted to do the hunger strike and someone would ask: but will we be able to do the strike in 3-4 days because afterwards we have to leave? Obviously, we were trying to combine it all.

How did the mass exodus of your generation start?

In some way, the monolithic view that Albania was the greatest country in the world has turned into its opposite. The regime tried to convince everybody that Albania was a sort of paradise, and that on the outside there was the capitalist hell. In the last days of the regime, everything changed and now people believed that hell was in Albania and that on the outside there was paradise. Some have even entered embassies without even checking which countries they belonged to. So, some entered the French, German, or Italian embassy, but some went to the Cuban one.

A public fantasy went into the extreme and was the basis of the widespread cultural awareness that culminated with the mass exodus. In those years, everybody tried to escape. It was the first opportunity to open up to the world after many long decades, and we decided to run away. Obviously, in this way, many of the young people who could have made a great contribution to post-communist Albania have fled the country.