The Wall, the Walls 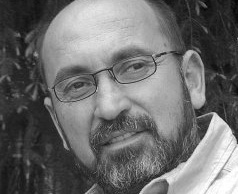 In 1989, Fatos Lubonja was in jail serving time as a political prisoner. It was there that he received the first news of what was going on in Eastern Europe. In the beginning, it seemed as if what was going on would not have any impact in Albania. An interview

In commentary on themes such as the prisons of Enver Hoxha, the pyramid scheme savings crisis, childhood among the strongly contradictory Albanian intelligentsia and the intellectual solitude of the new Albania, Fatos Lubonja, laureate of the Moravia award in 2002, is one of the most insightful Albanian intellectuals analyzing the social and political reality of the country.

What were the reactions in Albania to the fall of the Berlin Wall?

In prison, the fall of the wall was perceived with skepticism and I believe this was typical of Albania in general. This is because after its break with the Eastern block, the idea was promoted in Albania that we would not take the route of revisionism. We did not think it was possible that the chain reaction instigated by the fall of the wall could also involve Albania.

There was some hope too, but skepticism prevailed. We thought that Albania would become something akin to Cuba because Albania was similar to Cuba: isolated. We were not yet convinced of the possibility of what eventually did happen in 1991. We slowly started to feel the impact in 1990 when the situation started to improve in prison. They brought in better beds and they transferred us to the prison in Burrel (city in northern Albania and site of a prison which housed several political inmates during the communist regime) in April of 1990. There, we realized that something was going on and that Albania was not isolated.

What were the expectations with the first sign of changes?

There is an anecdote concerning this. At the time when there was a lot of talk of UFOs, a U.S. scientist claimed that "if one day aliens really came, it would be known immediately." It was like this in prison. Everybody hoped that something would change and that something would happen, but it was a bit like the saying about the UFO. It was understood the moment it really happened.

What were the factors underlying the collapse of the regime?

Details are not well-known even today. The collapse of the regime was prompted by its economic downfall. The country could not provide for its existence. During the 1980s Albania really declined. It was left isolated after the breakup with China in 1979. Even in prison, we knew what was going on. Everything was rationed, but still people thought the regime was politically strong enough to survive. It did not go on like this. The economic collapse and the simultaneous events in the countries of Eastern Europe was probably no coincidence.

What was your impression of Albania once you got out of prison?

The regime collapsed in the 1990s and they started to let people out of prison. I got out on 17 March 1991 with the last group of political prisoners. But it is not like in the prison we did not know what was going on in Albania. There is a line in Shakespeare's King Lear which goes: "we go to prisons to see what is happening in the country."

Once out of prison I moved into the house of my grandfather which was built in 1925. It had one floor and three rooms and I shared it with my uncle and my father, who had just returned from deportation with my mother. My brother and his wife and two children lived in the corridor and when I arrived I had to stay in the basement, together with my wife at that time and our two daughters. People lived in misery but had great hopes. We still lived in isolation, so we had these dreams. People were making plans to go to Italy or the United States and start a new life. There was great enthusiasm.

How did you confront the dilemma of migrating as opposed to staying which, in those years, was so common in Albania?

I never planned or thought of leaving Albania. For reasons related to the past, I thought my place was in my country. I wanted to give my life meaning in that country. This was my philosophy. I started to write, to follow what was going on, and to fight for human rights.

There was a political and cultural reaction to communism in the '90s. How do you see this phenomenon?

Talk of communism has two different meanings, tied to the historical divide between Western and Eastern Europe. Communism in Albania was a system which produced a lot of abuse. In Albania, compared to other countries for example, the anti-communist sentiment was very widespread. But there is a paradox: the champions of anti-communism were the people like Berisha...ex-communists. This gave little credibility to the struggle against the abuses of communism. Anti-communism became just an instrument of power. It was manipulated.

Our regime was more brutal and isolated than all of the others. It imposed a severe class struggle. All those who were not communists and were enemies of communism were considered class enemies and did not, for example, have the opportunity to continue their studies. Because of this, at the time the regime collapsed, there was a social stratum. There was a persecuted class which had the moral credibility to lead Albania but did not have the right intellectual properties. These were isolated, deported people; people who had been in prison until '90-'91. There was a lack of enlightened dissidents who could produce a different type of anti-communism.

Instead, what emerged was anti-communism with communist, bolshevik methods. Berisha's culture was communist, totalitarian, closed, and incapable of dialogue. He started to eliminate his rivals and the best way for this was to declare them communists.

The symbols of the recent past were also removed...

The trend back then was to remove any trace of the regime. The socialist-realist works were removed from the National Museum in Tirana; there was a long discussion about whether to remove the mosaic from the facade of the museum or not and just a few weeks ago, the monument to the "five heroes of Vig," partisans from Shkoder, was replaced with a fountain.

But not only this. There is nothing, for example, which commemorates the prisons and the people who were political prisoners during the regime. The prisons have been destroyed. I was recently in Spaç. There was a mine and a prison there and it was the only place in Europe, I think, where the prisoners in the post-war period worked in a mine. There is no intention to turn it into a place of remembrance for the young, for example. The last time I was there, I met an engineer who accompanied some Turks who wanted to start digging and reopen the mine. People want money, not history.

On the other hand, the ex-communists who came to power in the period between 1997 and 2005 had an ambiguous relationship with the past because they were direct descendants of those who had committed the crimes. Albania is also a country of clans and it is not easy for the children to condemn their fathers. The father is a patriarch; he represents the identity of the clan.

The regime of Enver Hoxha was denounced in general, but nothing specific has been done to remember that time in Albania's past or to make people reflect on it. The thing I find most striking now is that society does not have the introspective capacity to start a process of reassessment of what happened: the people do not feel responsible. They project responsibility onto others, onto the system, and there is no process of self-reflection concerning anyone's responsibility.

What were the positive effects of the fall of the Berlin Wall?

A positive effect was definitely the collapse of the regime. The fall of the wall was also the end of isolation even though I am still skeptical because cultural isolation has, nevertheless, remained. But it cannot be compared to the political isolation from that period of time. Many possibilities for exchange of ideas, for contacts between people have been created.

What did you think back then of the disintegration of Yugoslavia?

I have reflected on the disintegration of Yugoslavia over the years. In the beginning, many of us saw the dissolution of Yugoslavia as a consequence of the collapse of communism - as something which was connected to the fall of the Soviet Union. Given that it was a state build on dictatorship, its disintegration and the creation of new states has been seen as liberation from dictatorship in the spirit of anti-colonialism. I was never a nationalist, but I saw it as a normal phenomenon of liberation.

On the other hand, after all this time, I now think that even after everything that happened, Yugoslavia should have been kept together, with European help. At the same time it should have been transformed into a democratic country without dominions, without nationalisms. I don't know if this could have been possible. The elites there failed. They abandoned Yugoslavia.

They did not succeed in building a new Yugoslavia because they were a minority whereas the majority was tightly controlled by the nationalists (sometimes ex-communists-turned-nationalists) which, to maintain power, destroyed that country and created all those tragedies.

Do you think Europe is stronger now compared to that period of time?

Europe in '89 was stronger compared to what it is now. Not because it was really stronger in and of itself, but because its faith in that project was stronger. Today there is a lot of distrust concerning the integration of the other countries. Back then, the project had more credibility.

And Albania of today? How do you see your future twenty years after the fall of the wall?

What I said of Europe, in a certain sense, is also valid for Albania. In the beginning of the '90s, the country was in awful shape. If you come to Albania today you have to notice the changes: people are calm, they are no longer ready to take up arms or get into boats to run away.

This is true, but it is also true that we are depressed. There are two reasons. First, back then there was great hope of rapid change, of quickly finding one's place in the country whereas now, we certainly know better, but there is the sensation that this is Albania and that this will also be Albania in the future, with a corrupt political establishment.

Secondly, what is depressing is that the system which has been created is not really a democracy but an aristocracy in which people are slaves who work for the caste. It is a system which also exists in Italy or the United States, but in a country like Albania and in the countries in the East, in general, I would say it is much stronger because there are fewer tools for getting rid of it.