Albania and post-Covid19: a look at rural life 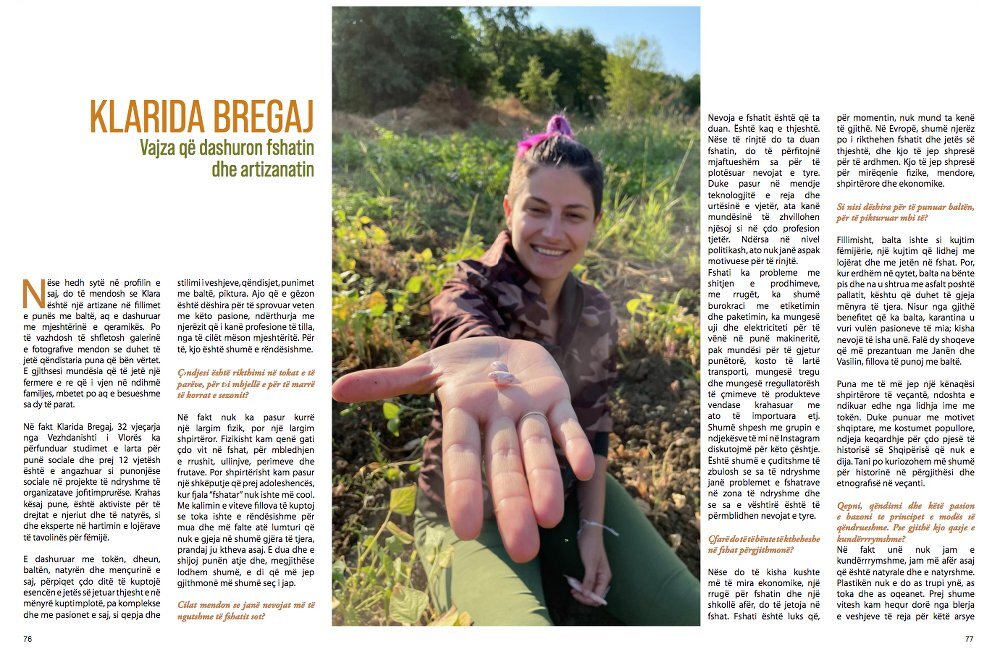 A page from the N'Harmoni magazine

In a space suspended between the digital world and real life in the Covid-19 era, a young Albanian woman returns to her homeland to promote agricultural development, traditions, and equal opportunities in the rural sector

The pandemic has forced us to stay indoors, spending time on the computer, converting the digital space into a place to take refuge from the cramped domestic spaces. It was in one of those days that I discovered the blog “Fshat e Zanat ” (Village and trades).

Many of my friends and acquaintances in Albania and abroad followed this social profile, dedicated to a sector neglected by politics for decades and abandoned by young people.

Curiosity prompted me to investigate, discovering with surprise that the blog had merged into the publication of a quarterly magazine dedicated to the stories of people convinced of the need to re-embrace traditions, homecoming, and traditional crafts. Behind this initiative is Marcela Tringaj, a lawyer and mother of 3, who returned to Vlore after years of study and work in some European countries.

How did the idea of investing in the promotion of the agricultural sector come about?

I lived in England and unfortunately had relations with Albania only from a distance. I had had a passion for 'returning to the village' for years and I was able to partially combine it with post-graduate studies. I was not focused on sustainable rural development but rather I studied the development of large multinational companies, coming to believe that capitalism was not the only system that can bring prosperity to countries. The scheme overlooked the potential of ordinary people, which is what in my opinion we are often most deficient in.

Thanks to the contribution of ordinary people, invisible and voiceless, the development process can be carried forward. Thus my blog was born dedicated to the local economy and to the hundreds of women and men in the agricultural sector, still considered the foundation of the Albanian economy. After returning home, I embarked on a tour of the various villages from the north to the south of the country to better understand the challenges and local realities of the rural world, then taking the next step: the publication of a magazine, "N'Hamoni ".

The Albanian publishing sector is another sore point, why launch a magazine…

I felt the need to make my voice heard and bring together different people who share the same passion. It all started on a completely voluntary basis. I wanted to focus on the farmers who, with their honest work, make a contribution (invisible in some ways) to the development of their country. While the political class ignored reality and the struggle for survival in the villages, the online propaganda exploited them only for shots at sunset to be circulated on the net. It is our duty to focus on sustainable development, strengthening communities, and building that mutual trust that has been lost over the years.

How is the sector doing today?

Almost 43% of the population lives thanks to farming, making agriculture an essential sector for Albanian GDP. More than half of the workers are women, which significantly affects the family budget.

There is a need to attract attention to the rural world, left to decay for years, to counteract the abandonment of rural areas at a high pace by their inhabitants. Now, after all, even life in urban areas is no longer satisfying, many are looking to emigration again. Many young people argue that the lack of prospects and disillusionment has led them to resign to the fact that there is no future in their village. The shadow of economic hardship and social desperation must lead us to reflect and act immediately to curb the bleeding and facilitate the integration of those who want to go back to investing in rural development.

You mentioned women, and their emancipation…

Studies say that if women filled management roles in this sector, thanks to their management skills, they would achieve satisfactory results in the family economy, which then translates into better education of the children, quality of life, and so on. In fact, this does not happen in Albania or elsewhere. Their role in the agricultural sector is mainly as farmhands, and local customs continue to favour the inheritance of the land from father to son.

Girls face many difficulties to own a piece of land and are in a disadvantaged position with regard to university education or to decide independently on their own life choices. Their contribution is not adequately recognised and the lack of income affects their independence.

The frequent conferences on rural development promoted in Tirana are mainly attended by male farmers. And often the speaker's designer jacket is valued more than the plots cultivated by a woman.

Against this backdrop, why be a farmer?

Young people's progressive estrangement from this world comes not only from the desire to overcome poverty, but also from the lack of orientation during their studies. Certainly the land's potential does not ensure a comfortable life, but investing massively in law degrees is not a path that leads to prospects for everyone either. We need to diversify the investment areas and encourage new graduates to return to rural areas, as their contribution is essential not only on a personal level, but also for the local community itself. To strengthen the social fabric and prospects of rural areas we need a new mindset and young entrepreneurs. Though the question arises, does this play in favour of today's capitalism?