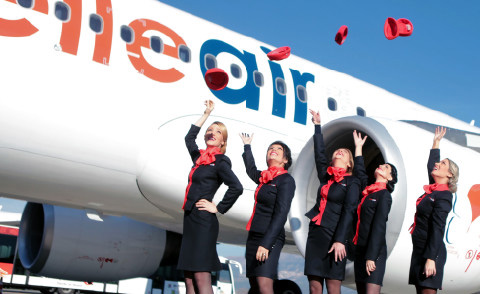 A year ago, Belle Air failed, the only airline flying the flag of Albania. Its failure was hailed by many as the end of a nepotistic monopoly, but no alternative project has come as a result of its destruction

The last Belle Air flights landed in Italy – in Cuneo, Milan, and Bergamo. It was the late afternoon of Sunday, November 24th, 2013 and the scene was the same everywhere: together with the passengers, the flight attendants got off the bitter ladder in their orange-blue uniforms – young people, barely holding back the tears. As instructed, pilots had waited for the landing to inform their crews that their plane would not return to Tirana.

A few euros to reach the Malpensa airport, and Alitalia tickets home, were the only consolations bestowed by the captains – also soon-to-be unemployed, but only after flying their air-buses to mysterious deposits in Austria, France, and Czech Republic. After eight years of activity, with 50% of domestic air traffic, planes filled, the high season approaching, and 50,000 tickets already sold until March 2014, Belle Air – left without competitors – mysteriously closed its doors. Unable to explain the unexplainable, the press release issued on the evening of November 24th on the airline's website described the situation as temporary:

After eight years of successful flights from Albania to European destinations, Belle Air is forced to temporarily suspend its operations due to the general economic conditions, the reduction in purchasing power, and the recession as well as the freezing of its bank accounts for over 18 days. During this time, Belle Air will commence a process of internal restructuring aimed to return with the lowest prices and the best service and quality in the Albanian market. This is a sad day for all of you and for us in Belle Air.

Born in June 2005 with the express intent to compete on low cost with the already established Albanian Airlines, in less than a year Belle Air was able to establish operations in 7 Italian airports, soon followed by destinations in Greece, England, Belgium, Switzerland, Germany, Czech Republic, and Austria. At the peak of its expansion, Belle Air's fleet could count on 9 vehicles (7 Airbus 320/319 and 2 ATR-500), covering 28 destinations located in 12 European countries. Only in Italy, where around half a million Albanians live (and hence travel), Belle Air flights landed at 18 airports (Bergamo, Milan, Turin, Cuneo, Trieste, Venice, Verona, Bologna, Forlì, Rimini, Ancona, Genoa, Pisa, Florence, Perugia, Pescara, Rome, and Bari).

The partnership with Belle Air Europe – the Italian twin based in Milan and founded in 2009 – had made it possible to expand the business to Kosovo and Macedonia (weekly direct flights connected Prishtina to Verona, Bergamo, Venice, Monaco, Stuttgart, Dusseldorf, Brussels, Basel, London, Friedrichschafen, Nuremberg, Hanover, Malmo and Vienna; and Skopje to Dusseldorf, Ancona, and Rome). The size of the business obviously translated into remarkable job creation – when it failed, Belle Air counted 476 employees in various airports. Except for the pilots – mostly international – both ground and on-board staff were almost all Albanians.

In the face of these numbers, it is very difficult to believe the vague, financial reasons officially given – when planes are packed, the "reduction of purchasing power" and the "market downturn" become empty expressions, which can only be explained with the attempt to hide an uncomfortable truth. In early November 2013, the Albanian state decided to freeze the bank accounts of the company, because of debts between 6 and 8 million Euros. However, after various negotiations, the accounts were unlocked, and the two sides set the deadline for the settling of the debt at December 31st.

But the state was only one of the creditors of Belle Air: as pointed out later in the study conducted by the Court of Tirana, where Belle Air finally decided to file the request for "failure for the purposes of reconstruction" (November 22nd), the company's total debt amounted to € 51.7 million, to be divided between airports, banks, suppliers, and employees – who, it turned out, had already worked for three months without receiving their salaries. According to the Albanian Labour Code, depending on role, function, and seniority, the debt owed to each employee ranged from 4,000 to 50,000 Euros (note that the average salary for a breadwinner in Albania hardly reaches 300 Euros per month). Furthermore, 50,000 passengers had already been sold tickets for the months ahead: following the suspension of flights, not all chose to convert their ticket into a replacement flight made available by Blue Panorama – this form of protection cost about 60 Euros – and many gave up on the trip in order to make a formal request for reimbursement.

Two very simple questions still remain unanswered. First, how could Belle Air, despite its success and its monopoly position, accumulate such a debt? Who has gained from it? Second, will employees and passengers ever see their money?

The logic of the feud

On January 24th, 2014, the Court of Tirana officially recognized the failure of Belle Air and entrusted an administrator of its appointment with the management of the company's assets, with the goal to convert its assets into liquidity in order to ensure the payment of all debts. It is very difficult to predict the future, but the past is quite clear: the take-off and landing of Belle Air are just two episodes of the same story.

What seems to have changed in a year is not the company's profits, but the willingness of public authorities to give credit to a company first affiliated and then enemy – the new government just said no where the old one had closed an eye.

No doubt, the monstrous debt – the origin of which remains a mystery – had to go away, but the chosen way out suggests that the new government also puts the logic of the feud before that of the market. During the election campaign, Edi Rama stated that a liberalization of the aviation sector would be necessary: over a year after he took office, the monopoly of the enemy has been destroyed, but at the expense of Albanian employees and passengers.

As always happens in Albania, import rather than liberalization was the solution. Alitalia and Blue Panorama were left rubbing their hands at receiving from the Albanian civil aviation the extensions of permits on the routes inherited from Belle Air, for the sole purpose of protecting the tickets issued – in fact, such an impressive market share was donated in full to a foreign company. Decidedly less happy are Albanian families who, in exchange for slightly more competitive prices, have lost over half of the destinations. As for the former Belle Air employees, unable to organize in a country where unions do not exist and totally ignored by both the media and national institutions, their stories, halfway between personal tragedy and geopolitics, are likely to be the subject of the novels and fictions of tomorrow.

Former Belle Air hostess Floriana, 27, is leaving for Riyadh, Saudi Arabia, in a little over twenty-four hours. Her eyes say that she knows that her life is changing, but she manages a smile and some humour. "Oh joy, I will become rich. I am just concerned with the veil question: Saudi Arabia is not Qatar, I was told by colleagues that there you always have to wear it in public, you cannot even talk to a male colleague. But perhaps they exaggerate..."

Floriana had interviewed in Qatar too, but a tattoo, no matter how invisible, came between her and the Qatar Airways – she was naïve enough to answer a truthful "yes" to the question that creams half of the candidates worldwide: "Have you got any visible scars or tattoos?" Hence Arabia, where no one asks about tattoos, for the simple fact that hostesses wear the scarf. After a month of training, Floriana will become a flight attendant for Flynas, a Saudi low cost company that offers international staff $ 2,500 per month, food, and luxury accommodation. "Better than a call center, right?", she says, but here the humour turns bitter.

A quantitative study on the routes of dispersion of Albanian aviation would be very interesting. Yet, even in the absence of empirical data, some stories sketch a meaningful picture. After the shutdown of the company where many employees had grown professionally – eight years in aviation do shape one's CV – Belle Air staff found themselves on the streets, looking at the expiry date of their flight licenses, hoping for an alternative that never came.

"They won't be stupid enough to give up an Albanian company! So we thought for a long time, but now there is no time to think...". Not everyone has chosen Floriana's path. Some have tried to reposition themselves in the difficult Albanian labour market, between domestic informal labour and foreign, low-wage outsourcing, but most rightly decided not to give up their specialized training.

Since no Italian airline is planning to hire – in fact, after the events of Etihad, Alitalia itself is dealing with redundancies – Albanians have preferred to look East: Qatar and United first. This year, the officials of Qatar Airways visited Tirana twice, in July and October – a few days of interviews at the Sheraton Hotel were enough to recruit most of the Albanian flight crew.

The on-site open days, organized preferably (but not only) in countries with a Muslim majority, are just one of the alternatives available. Candidates can also send their CVs to obtain an interview in Doha – an option chosen by many, as the company bears the costs of travel and accommodation! Given the gap in prospects, it is clear that leaving (in the nineties we used to say "migrating") becomes an opportunity not to be missed. What is disquieting, and I say this as a contemporary of Floriana, is that although Albania is not yet politically "Europe", the story of Belle Air and its young people is already fully "European". If Europe keeps seeing itself as the world, the world will take away more easily its ever more disappointed children.