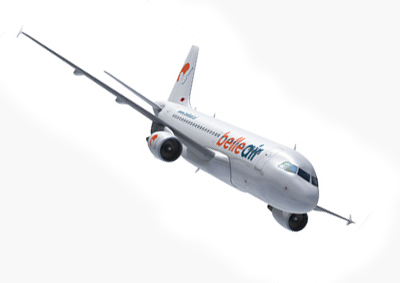 It had virtually become the Albanian flagship carrier. But now its planes no longer fly. Behind a still confused story there are years of unpaid taxes and owners very close to former Prime Minister Sali Berisha

Hundreds of Albanian citizens, who had booked flights with the Belle Air airline, remained on the ground. On November 22nd, the Albanian low-cost company announced the temporary suspension of the service because Albanian authorities had blocked its bank account. The mystery remains about the fate of about 50,000 tickets sold by the company for flights up to March 2014.

Belle Air covers – or covered – about 50% of air traffic between the international airport of Tirana and many Italian cities, France, and the United Kingdom. As of now, the luckiest in this matter are Italian passengers, who have benefited from the alternative service provided by the Italian Blue Panorama Airlines. For the rest, all scenarios remain open.

In the blue, blue sky

Belle Air started in 2005 as a low cost few would bet on, but its red, white, and blue logo quickly appeared on the screens of all airports in Tirana. In fact, as a result of the failures of Albanian Airlines and Albatros, Belle Air had become Albania's de facto national airline. Yet, a few mysteries surrounded it. For a start, not even Albania's most navigate investigative journalists still know exactly who are the actual owners of Belle Air.

According to the business register, the company was founded in 2005 by Arjan Myrtezai and joined in 2007 by the couple Suzana and Ilir Xhelo – three people outside Tirana's political and economic elite. However, rumours say that they are just nominal owners, while the company allegedly belongs to Argita Berisha, daughter of Sali Berisha, and the current mayor of Tirana Lulzim Basha.

The company was founded with a capital of about 10 million LEK (about 70,000 Euros), the minimum required by Albanian legislation and has allegedly grown to a capital of 1.4 billion LEK in 2013. According to financial statements filed in the business register of companies, Belle Air has marked a tremendous revenue growth since 2011, following the liberalization of Schengen visas for Albanian citizens. That year, 1.8 million Albanians passed through Tirana's airports.

On November 22nd, 2013, however, despite data picturing a company far from being in crisis, Belle Air filed for liquidation and bankruptcy in the court of Tirana. According to representatives of the airline, Albanian authorities blocked the company's bank account.

The Rama government, however, denies taking such drastic measures. What is causing the crisis of Belle Air, according to the Albanian authorities, is tax evasion for no less than 5 years of unpaid taxes to the state of Albania, five years in which the institutions apparently did not notice anything. Filing for bankruptcy, then, would be nothing more than a way to escape the heavy penalties that would weigh on Belle Air for tax evasion.

Albanian passengers, who in recent years have preferred Belle Air to flagship airlines such as Alitalia, Lufthansa, and Swiss Air, had to turn a blind eye too. Belle Air has never really compared to European low-cost airlines. After remaining the only domestic airline, Belle Air enjoyed the market advantages of a monopoly, as well as considerable freedom with regard to timetables and ticket management. Belle Air passengers protesting at counters was part of the daily routine of the departure terminal, and trampling on passengers' rights had no longer been news for some time.

Though no serious accident happened, safety was not the strong point of the company even when its finances were in full growth after the liberalization of Schengen visas: right in 2011, Belle Air received a cold shower by EASA, which left on the ground some of its planes, considered not to comply with the rules of the European skies.

Although we can not speak with certainty about many aspects of Belle Air's story, it is curious that the company declared bankruptcy just a few months after the new government came to power. Whoever its owners are, they seem to enjoy few favours from the Rama government. By the way, Prime Minister Edi Rama recently announced a liberalization of the civil aviation market in Tirana, opening to international low-cost airlines working in other Balkan countries. So had said also Prime Minister Berisha, but that had remained a statement.

Anyway, Belle Air is not an exception. Facts show that over the years a pattern of dependency developed between those in power and the moment's main airline. Belle Air was founded in 2005, while Albatros was failing – another Albanian low-cost that listed among its owners the son of president of the Republic Alfred Moisiu. Needless to say, the failure of Albatros coincided with the political weakening of President Moisiu. As seems to happen for Belle Air today, the cause of the failure of Albatros was tax evasion.

Previously, the same combination of tax evasion and failure had consigned to history the flagship Albanian Airlines, which – among other things – made the blacklist of European aviation authorities for its embarrassing technical standards. Now it's Belle Air's turn. Surely, its decline will lead to a new phase in the history of civil aviation in Albania. Everything, however, depends on how this will be managed. It could end up like with all previous companies, with Albanian citizens – as always – losing.

On the other hand, this could be a positive turning point if authorities finally were able to streamline the anachronistic procedures that lead to monopoly and nepotism in aviation, opening the market to international low-cost airlines. The liberalized visa regime and the strong links with the diaspora make Albania a dynamic, growing market, which could only benefit from increased competitiveness.