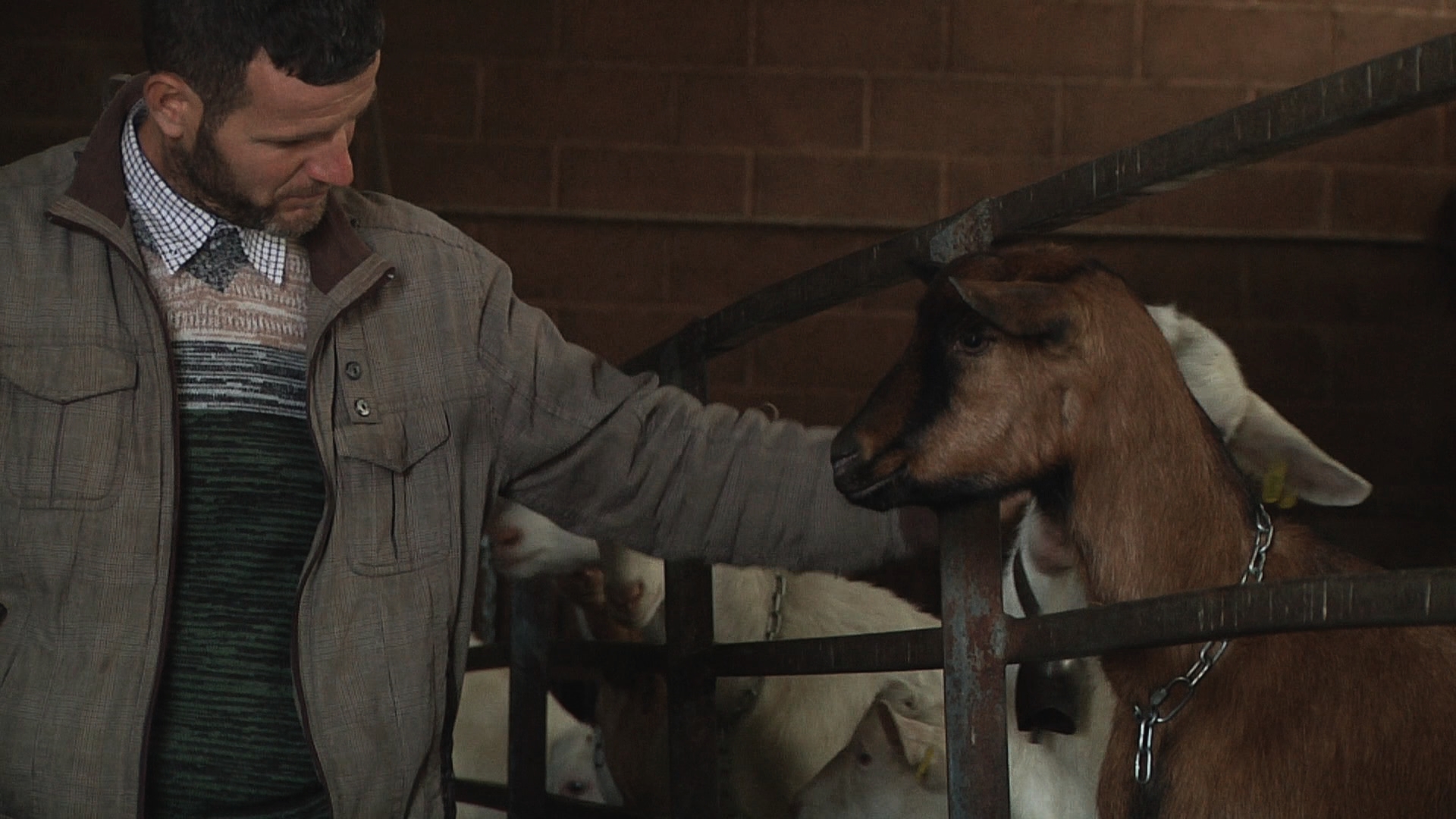 A group of Albanian farmers explored the Reggio Apennines in search of useful solutions for the north of Albania. We tagged along in this "study-trip" organised by a local NGO

In the plains, in Reggio Emilia, the morning was cold and gloomy. When, after an hour of hairpin bends towards Succiso, Davide's Discovery stops at altitude, the sun is melting the clouds and the Italian-Albanian expedition awaiting us in a bar on the ridge has already had two rounds of coffee. "Finally, brothers, welcome!", Corrado Torcianti, the veterinarian from Collagna who will be our guide, welcomes us. "Welcome to the upper Val di Secchia, you are on the northern side of the Tuscan-Emilian Apennines National Park: that is to say, in the most beautiful place in the world". In the landscape and in the accent, this hilly corner of Emilia is close to Liguria and Tuscany – however, in the next two days, the lingua franca of our group will be Albanian. 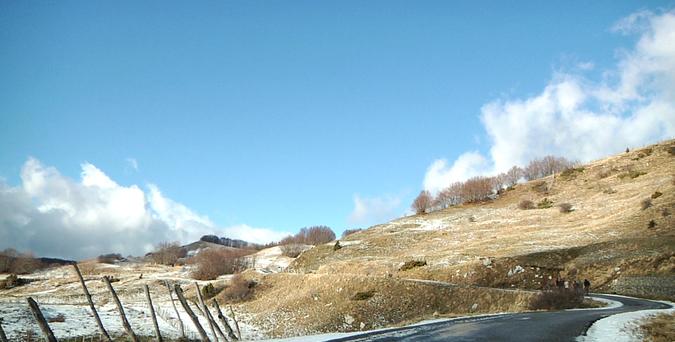 A veterinarian, farmer, and producer, Corrado has been taking part in the development cooperation project headed by the NGO Reggio Terzo Mondo (RTM) for a few years, both visiting the north of Albania and welcoming the groups of Albanian farmers who, in the slopes of the Reggio Apennines, find a similar landscape and solutions able to increase the profits of the supply chain. "When I go to church, I play guitar and help others sing – Corrado tells us in the short car journeys between the different companies – the same goes for all areas of life: others have taught something to me, I try to share what I know with others too. I joined RTM's initiative because I'm like that too. Here are people I have been following for three years, we have created a relationship of trust...".

The Albanian farmers that Corrado leads to the discovery of his territory are all young people born between the 1980s and the 1990s, in the middle of the transition from communism to democracy. The only familiar face is Pashk Hasani, protagonist of the video  we shot near his farm in September, in Mertur, in the "Albanian Alps". By his side, this time, there is not his wife Malbora, but fellow Albanians who have bet on the future of the territory that saw them grow up, migrate, and then return.

There is Behar Dunga, who in Qerret – a small village 40 minutes from Puka – runs a farm with 150 goats and plans to start a mechanical milking system as soon as possible. There is Gjergj Prendi who, together with three friends from Blinisht, wants to build his own workshop for the production of "white cheese" (in Albanian, diath i bardhë); there is Mesar Hasmegaj who, unlike the others, lives in the plains of Mjeda, a small town not far from Vau-Dejës, and with the help of his father and brothers manages a farm with over 400 sheep, selling milk to one of the main processing plants. Finally, there is Paola Gjoni (born in 1990!), the veterinary expert who Reggio Terzo Mondo has entrusted with the monitoring of the area of Fushë Arrez – the eyes and ears to which Corrado dedicates most of his passionate orations.

"Our goal – says Nicola Battistella, RTM aid worker who supervises the project on Albanian soil during the year – is not to replicate the dream of the Emilia industrial system! We are interested in the sphere of the possible: to understand how and why small family-run businesses work, similar to those that our farmers can create in Albania".

A goat is a goat everywhere, infrastructures – not that simple

The smell. The smells. Those who, like me, were born and raised in the city do not know the countryside – its rhythms, the air, the harshness, the labours, the satisfactions. They do not know its toil, they do not know its people. And they do not know the animals: before RTM gave me this opportunity, my first-grade zoology did not allow me to distinguish between a "massese sheep" and a "Sardinian sheep" – in fact, I did not even suspect that goats lived on our Apennines. From stable to stable, from farm to farm, I listen to the questions of the Albanian farmers, and ask my own: what does a goat eat? How many litres of milk does it produce? How many kids does it give birth to in a year?

The secret of good farming is the same as for good cheese: balance. Time and dosage determine the performance to a good extent. There is a season for mating, there is an optimal mixture for fodder, there are different types of stables – there are, in short, "balances" based on years and years of attempts and experiences. An attention to detail that is at the centre of the explanations of all the farmers we visit, regardless of the animals they keep and the size of their company. As far as I understand, in the countryside, every gesture is economy: not to save on the quality of life of animals – the primary resource, preserved with, I would say, sacral attention – but because every gesture costs effort, and energy-saving is at the core of a farm that intends to be on the market, starting with the human arms. 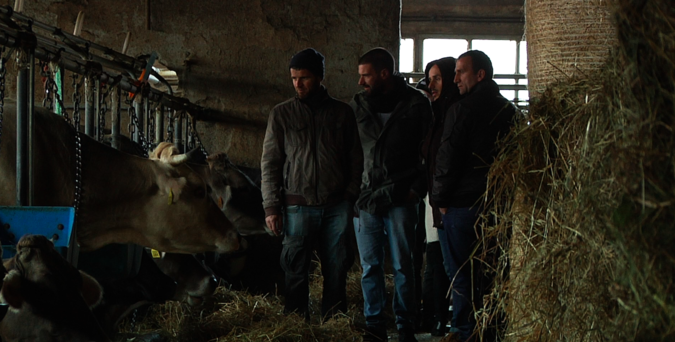 To explain how fragile a production chain can be, Corrado tells me a story: "A problem I encountered in Albania is mycoplasma abortion. In recent years, some flocks have been infected. If twenty or thirty animals abort, it is a tragedy: it means being out of kids and even losing milk, as aborted pregnancy milk is not good for cheese". Such attachment to animals as resources ultimately belongs to the Albanian tradition but, during Enver Hoxha's long dictatorship, an absurd "cooperative" organisation of the countryside had taken away ownership of the animals from families who had been devoted to farming for centuries. The North of the country, with its solid tradition, has paid the highest price for this unfortunate collectivisation without ties to the reality it claimed to govern.

Knowing all this, while chasing Davide's camera with the microphone, I look in wonder at our Albanian friends, shepherds in the aftermath of the dictatorship. Their proud, concentrated looks do not reveal any amazement at Emilia's efficiency. They are from another place, but they are farmers too – they understand the dilemmas and troubles of Italian colleagues, and in turn tell us that some things in Albania are done differently. When I ask Mesar if he notices big differences, he casts me a self-deprecating smile: "goats are goats everywhere, only these are a little fatter". While he speaks to me, his big hand wringes the bearded head of a dark kid – animals and farmers share a distinct familiarity. I, on the other hand, get but diffident looks from sheep and goats.

If a goat is a goat and a farmer is a farmer, the starting conditions are not always the same. In front of infrastructures and technologies, the Albanian eyes light up with novelties. When Corrado shows a mechanical milking system, a probe for ultrasound, or a vial of antibiotic, the question is always: "How much does it cost?". This is the only case when answers do not encourage optimism.

Other times, however, the suggested trick is simple and cheap. It is the case of the raised platform that Corrado uses to milk, or of the "self-trapping manger" – a system as rudimentary in the realisation as sophisticated in the outcome, because it forces the sheep to eat in neat rows, guaranteeing the right quantity for each animal. While the flock proceeds in single row, the guest farmers take some pictures. "When I go back, I'll do this too" – nobody says it in words, but the looks are clear.

In RTM's vision, change is generated by encounters. And actually, at the end of the "trip", it is hard to count how many people I have met. Arranging the files on the computer, I think of the courage of Marco Maraglia, who with his small farm ("Il Laghetto") has devoted everything to goat farming: his caciotte are his gold, but for his guests from far away Marco cut without weighing. Then I think of the nice Santini brothers, who also keep cows in Valbona, a hamlet of Collagna. Today, Giuseppe Santini has five tractors in the garage, but two donkeys in his stable remind him of his ancestors: "That is for my daughter, the other for my niece. They were the means of transport of our transhumant shepherds – he explained to the Albanians, receiving a benevolent "we know well" back – today they are only a loss, but we have this tradition, what can I say...". Finally, I think back with pleasure to the beautiful Italian-Albanian table set up at the "Valle dei Cavalieri " cooperative in Succiso – a real jewel in the crown of a territory that has created work and development based on its own resources and identity.

If the RTM method is successful, in the long run something similar could happen in northern Albania, where GDP per capita is less than one-sixth than in Italy. Where the word "cooperative" evokes a dark past. Where an unspoiled landscape takes your breath away. Where Pashk, Behar, Gjergj, Mesar, and Paola are working, with their own hands and skills, for a different tomorrow. An Albanian tomorrow.