The Oxygen Method in Europe. New lenses to see the hidden censorship 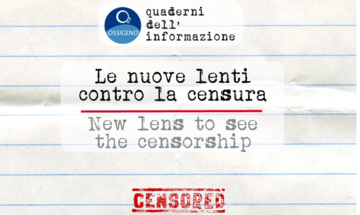 Ossigeno per l’Informazione has published the manual "The new lenses against censorship" showing in detail the method of monitoring developed by Ossigeno and experienced in Italy, and its results

According to the analysis of Ossigeno, many cases of intimidation, threats, abuse and other violations, are carried out in order to censor or restrict the ability to publish news and opinions that are of significant interest to the public, but that are also disliked by the power that, everywhere and incessantly, by its very nature, attempts to circumvent limits, rules and prohibitions. This happens in authoritarian states as well as in democratic states like Italy.

The e-book “The new lenses against censorship” shows in detail the method of monitoring developed by Ossigeno and experienced in Italy, and its results. The manual provides answers to the main questions posed by those who want to observe such an elusive phenomenon: how to collect the information, how to verify and classify this data, why and how to make the intimidation public, what resources are needed, how to involve the threatened journalists and the organizations of journalists. In addition, the e-book exposes the problems that still need to be explored.

The manual was produced within the Safety Net for European Journalists project coordinated by Osservatorio Balcani e Caucaso and supported by the European Commission. The English version was produced with the support of the Office of the OSCE Representative for Freedom of the Press.