MEPs call for an end to illegal logging in Romania 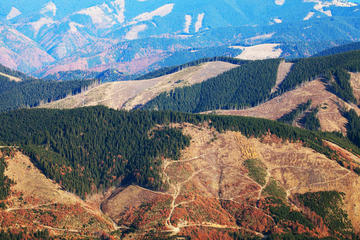 A lot of this deforestation has taken place and is still taking place in areas that would in principle be under special protection as part of the EU's Natura 2000 network and as UNESCO World Heritage Sites. The European Commission therefore launched an infringement procedure against Romania on 12 February 2020. However, illegal logging has continued at a rapid pace since then and there is a clear lack of effective action by the Romanian government.

As time is running out to save this unique natural resource, 83 Members of the European Parliament have now made a strong appeal to the European Commission for immediate action. This was done at the initiative of Viola von Cramon, who had visited Romania for several weeks to assess the situation for herself and recognised the urgent need for action:

"The systematic illegal logging in Romania's last primary forests is causing enormous damage to these ecosystems, which are particularly important in the fight against climate change. There is the threat of irreversible destruction of particularly valuable natural heritage and of massive damage to biodiversity.

The Commission has already launched an infringement procedure, but illegal logging seems to have even increased in recent months. It is therefore of the utmost importance that the Commission takes effective action now to put an immediate stop to these illegal activities, with the support of the Romanian government.

I am also very concerned about the increasing attacks on civil society and on organisations actively involved in forest protection on the ground. Disinformation and smear campaigns, intimidation and threats are unfortunately an everyday occurrence for activists in Romania. This too must stop".

As a reaction to the appeal to the European Commission, not only Viola von Cramon but also all co-signing MEPs received a letter from Nostra Silva with vast accusations, "a collection of misleading interpretations and twisted facts". Moreover, this letter contains slanderous personal attacks to Viola von Cramon and unsubstantiated accusations against her person.

"As a politician and a Member of the European Parliament, declares Viola von Cramon, I am strongly committed to transparency and fact-based decision-making. My motivation to draft that letter und to invite my fellow MEPs to co-sign was and is the deep concern for the irreplaceable primary forests, which are under special protection for very good reasons. There is nothing anti-Romanian about this, on the contrary – I feel that as a committed GREEN and EUROPEAN it is my duty to stand and fight with those facing wrongdoings and support the protection of the environment wherever I can, not just in Romania".

Therefore, the MEP decided to publish the letter from Nostra Silva and her answer on her website .