"Defending journalists in danger: solidarity, support and protection". This was the title and the topic of the conference that the European Center for Press and Media Freedom (ECPMF) – a consortium of which OBC Transeuropa is a founding member – organised in Leipzig on October 5th. An opportunity for international dialogue on a wide-ranging topic such as freedom of expression in the Internet age.

Opening the event, OSCE representatives Harlem Désir and Frane Maroevic recalled how the issue of press freedom cannot be managed by the state: "It is not up to governments to establish what fake news is", said Maroevic, "and the problem will not be solved by financing social networking services. Self-regulation does not mean self-management, it is necessary to create intermediate bodies and institutions: it is primarily up to journalists to find a solution and recreate respect for their profession". 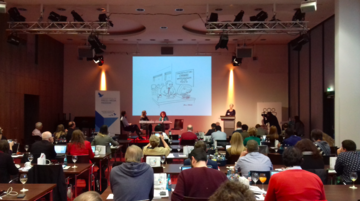 The first panel was devoted to the experiences of reporters on the field. Greek-Swedish Alexandra Pascalidou shared with the public the threats she has been facing since the age of 25 because of her origins: "I am the living testimony of the fact that even democratic countries such as Sweden have issues with freedom of expression". Greek reporter Will Vassilopoulos presented his work on migrations, starting from the ethical dilemmas: "the cleavage between the misery you see in the refugee camps and your breakfast in the hotel creates great moral embarrassment, sometimes hindering the necessary professional detachment". Ukrainian journalist Aleksei Bobrovnikov reported on the interviews collected in the Donbas, in the gray areas of the Russian-Ukrainian war – confessions that cost several of his respondents their lives.

But how do you protect journalists and witnesses? The second and third panels, devoted to recent legal developments on source protection and seeking practical solutions, explored European responses to the difficult questions emerging from the first one. According to Anna Mayers, lawyer and director of the Whistleblowing International Network, protecting whistleblowers requires – first of all – to redefine the notion of public interest: "by public interest we mean food, environment, healthcare, social capital, merit, fighting corruption – matters that the mere notion of national interest often fails to encompass".

On the other hand, Kosovar researcher Flutura Kusari provided an effective excursus on the ruling of the European Court of Human Rights, recalling that on EU level several initiatives by MEPs have never been followed up on by the Commission's legislative initiative. Brussels was represented by Georgia Georgiadou, vice president of the Fundamental Rights Policy Unit of DG Justice. Urged by Green MEP Benedek Jávor, who asked from the audience why the Commission is so slow on such a crucial issue, Georgiadou replied that the issue is complex and requires a thorough reflection: "We are working on a balanced proposal to protect 'responsible whistleblowing'; it is likely that next year we will see the first results".

Meanwhile, on October 23rd, the European Parliament in plenary session will be called on to vote on a proposal by the Greens/EFA Group, that had already drafted a relevant directive in May 2016.