Ukrainian Roma refugees are not welcome everywhere across Europe 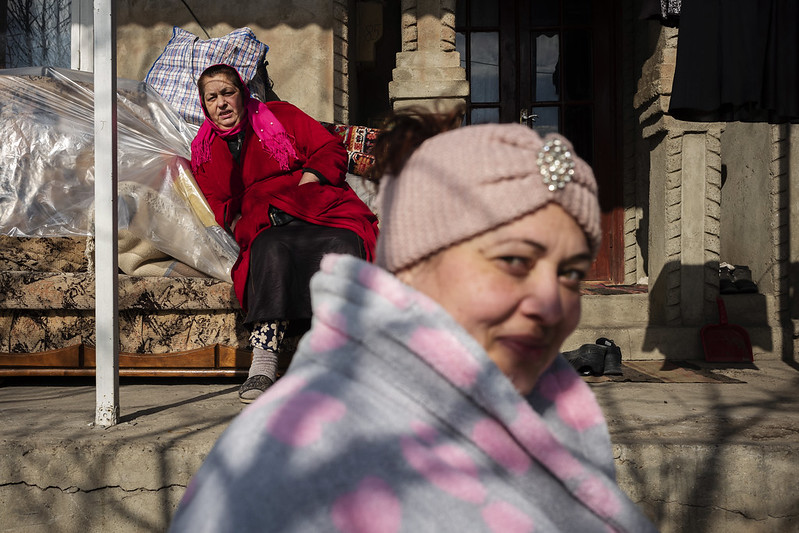 About 100,000 refugees fleeing from Ukraine to Europe are estimated to be Roma. They are particularly vulnerable, and yet appear to suffer from discrimination in at least some European countries, such as Czechia and Moldova

One year ago on June 19, Stanislav Tomáš, a Roma man living in Czechia died after several police officers pinned him to the ground and knelt on his neck for several minutes, exactly the same way as the afro-american George Floyd had died in Minnesota, USA. In April 2022, the Office of the Czech Public Defender of Rights (the ombudsperson ) found that Roma people refugees from Ukraine were treated as “second-class” refugees in the country. Their investigation showed that "There was no equal access for Romani refugees, who were either not allowed to enter the registration center at all, or only when accompanied by a nonprofit sector staffer or police officer. They then found themselves in a situation where they either had to wait outside or under a tent pitched in front of the building," Deputy Public Defender of Rights Monika Šimůnková, who led the team, told Seznam.cz.

At the Prague railway train station, some Ukrainian Roma refugees had no choice but to live there for weeks. Member of the European Parliament (MEP) Peter Pollak of Romani origins denounced the situation in Prague’s railway station, saying that "It is really worrying [for me] to see the huge number of children here." More recent abuses toward Ukrainian Romani refugees have been reported in the Czech city of Brno. Maria, who had left Ukraine with her daughter and three grand-children, told Romea.cz that she was supposed to live in a place "in the middle of the forest” surrounded by “barbed wire, armed security” and that she couldn’t cook for herself. In these conditions, she decided to leave.

Outside the EU, the situation is also concerning inside Ukraine itself and in Moldova. On March 22, a Czech-based Roma human rights organisation denounced that Roma people were being tied to lampposts and publicly humiliated in the city of L'viv, Ukraine. In Moldova, Human Rights Watch reported a practice that appeared to be based on an agreed policy to segregate Romani refugees from Ukraine in designated state-run reception centers, and to deny Romani refugees housing together with other refugees in alternate state-run centers. Sean Benstead, an activist and writer on Gypsy, Roma and Traveller issues, confirmed to us that in Moldova, Roma refugees have been “separated entirely” and “often segregated in different camps, in some ‘second class facilities’”.

A long record of discriminations

After these numerous reports, mainly by NGOs, the situation of Ukrainian Roma refugees made it to the European Parliament. Its members called for more action toward them during the plenary debate  which was held on the occasion of the Roma week back in April. European Commissioner for Equality Helena Dalli stressed the importance of ensuring proper assistance to Roma fleeing from Ukraine, pointing to additional issues faced by the Roma’s community: “100,000 [Ukrainian refugees] are estimated to be Roma. [...] [They] often struggle with additional vulnerabilities, such as a lack of identification documents, separation from family members, language-related communication difficulties and biased attitudes at the borders. [...] We must ensure that [...] the most vulnerable ones are provided humanitarian help in an unhindered manner.”

On his side, German Roma MEP Romeo Franz recalled that “12 million Europeans are of Roma origin and almost 80 per cent live in poverty and are marginalised because of their congenital ethnicity”. Therefore, he pleaded for “an equal rights law for [Romani] people and anti-Gypsyism” in the EU – a call that the European Parliament had already made in September 2020 by adopting a resolution for a better Roma inclusion .

Deep inequalities in all major aspects of life prevent the very Roma inclusion. Referring to the huge gap in access to legal work, education, water and basic needs, Sean Benstead talks of an “economic destitution” affecting Roma populations. Indeed, according to the European Commission’s Roma Integration Strategies report , in 2019 68% of Roma in the EU left school early, only 43% had a paid employment and 80% lived under the poverty threshold.

In addition to these material inequalities, Romani people face a widespread anti-gypsyism: the Roma and Travellers Survey published by the EU Fundamental Rights Agency in 2019 notes that nearly half of Roma and Travellers respondents (44%) experienced hate-motivated harassment in the 12 months preceding the survey. The situation is particularly though in Central-Eastern European countries, where Roma were recently blamed for spreading Covid-19.

The EU’s strategies and their limits

In light of these long-standing issues, the EU has tried to better include Romani people, mostly relying on two pluriannual strategies, the first adopted in 2011 and the second in 2020. In 2013, four more objectives were set in order to reinforce the 2011 Strategy : it was about setting criteria that member states would have to reach on education (e.g. making sure that all Roma children complete at least primary school), employment, healthcare, housing and essential services.

We asked Ioannis Dimitrakopoulos, Scientific Adviser for the EU Fundamental Rights Agency about the assessments of the strategy that have been done in 2021-2022. He told us that despite “some progress on education”, results are “very disappointing” overall. According to Dimitrakopoulos, both the lack of will of member states and the lack of awareness on how to reach the objectives can largely explain these inconclusive results. The 2020 strategy is more precise and more focused on discriminations, and it involves exchanges of good practices.

When we asked activist Sean Benstead his opinion about the EU's responses to Roma’s issues, he told us that “It's all well and good normalising Roma people, language and culture in the public sphere, but an economic destitution requires a serious economic strategy as a response”. According to him, a lot of the Commission’s work focuses on cultural exchanges, which is a “good signal of intent”, but “the material conditions of Romani communities require serious and deep economic action that sees state interventionism to disrupt those cycles of economic destitution”.

Moreover, the EU’s responses are mostly “‘fluffy statements’ without many actions from the EU, just recommendations for the member states”. Indeed, all these strategies are not binding, just as the European Parliament’s resolutions. In the absence of specific obligations or sanctions, it is up to the states to take charge of the problems.