Ukraine: home of cybernetics made in the USSR 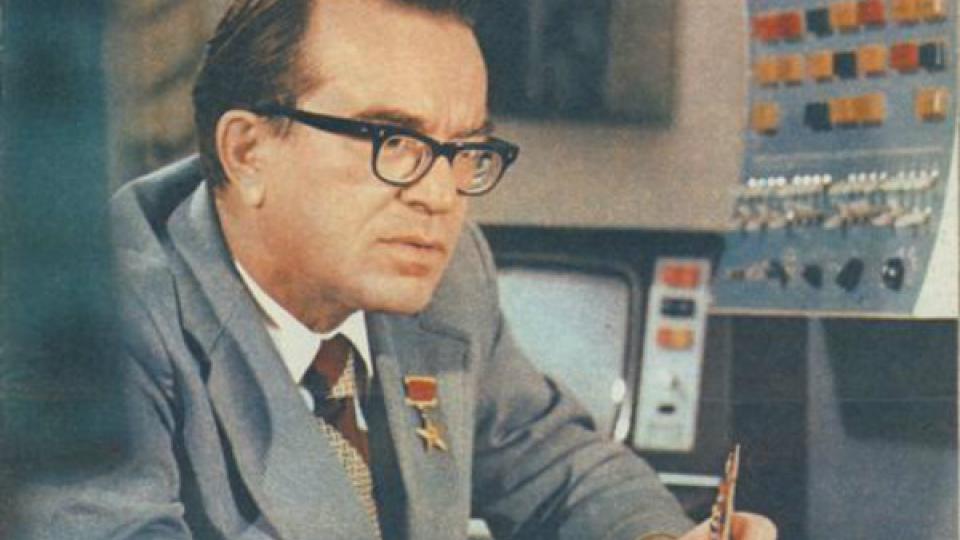 The Kiev Institute of Cybernetics was one of the hubs in the USSR for the study and experimentation of computers. For many years mathematician Viktor Gluškov worked there, dreaming of a "paperless" Soviet administration, but his vision clashed with Leonid Brezhnev

(Published in collaboration with EastJournal )

To reach the "Viktor Gluškov" Institute of Cybernetics in Kiev, take the blue line of the city subway, heading south-west, and get off at the last stop, Teremky. Another ten-minute walk along the street of the same name, prospekt Akademika Gluškova, and a tall building with windows of clear socialist imprint will rise before your eyes – standing out unmistakable like many non-residential works of the time. The wall, with its continuous interlocking of transparent windows, is a symbol and metonymy not only of the activities of the research centre, but also of the ideal which stemmed the Institute created in 1957.

Soviet Union, 1950s. Stalin would die – rather unexpectedly – shortly thereafter in 1953, replaced by Nikita Chruščëv, who would go down in history for his initial (temporary) international openings and for the de-Stalinisation policy officially inaugurated in 1956. The country was on its knees following the devastation of the Second World War, which decimated the population, devastated the industry and economy, and created a general housing emergency (for which the large-scale project of the so-called chruščëvki was born).

Yet, the cold war began in this period and the country, whether it wanted to or not, was forced to get up again and seek experimentation, progress, conquest – among other things, with the space contest with the iconic as well as tragic story of Jurij Gagarin , but also the development of nuclear power with the key figure of Andrej Sacharov , later a well-known dissident and important voice of the initiatives for disarmament.

In the 1950s, therefore, the leaders of the Soviet Communist Party became thrilled about the new science of cybernetics, which by its nature seemed to translate into a language permeated with an aura of truth, correctness, objectivity – a language therefore perfectly fitting the socialist utopia. Evgeny Zamyatin had described it well in advance in his novel “We” (1920), which – as its translator Alessandro Niero writes – has been "baptised and renamed several times: anti-utopia, negative utopia, dystopia or even anti-anti-utopia". It is a truly essential work of the genre and not only (which, in this writer's opinion, far outshines the much more famous “1984”), in which everything becomes transparent, erasing any individual boundary through the permeability of glass. Hence the glazed tower block in Kiev, hosting the renowned Institute of Cybernetics.

The first Soviet computers made in Ukraine

Cybernetics, also through a sort of effective lobbying on the party by leading mathematicians of the time, seemed a suitable sector for administrative and economic development, useful not least to the military sector in the context of the Cold War. In October 1961, the Soviet Cybernetics Council published a volume with the emblematic title "Cybernetics in the service of communism" (Kibernetiku – na službu kommunizmu) – an area of ​​research that would benefit the industry, transport, medicine, and the economy (defined as a "complex cybernetic system"). It was therefore proposed to create a large number of regional IT centres for the purposes of state planning and management, a creation that would ultimately lead to a "single automated control system for the national economy".

By the mid-1960s, the Soviet Cybernetics Council was already coordinating about 500 different research groups scattered throughout the USSR. Among them was the renowned Kiev Institute. The history of the Kiev research centre began in 1957, when the Institute of Mathematics of the Ukrainian Academy of Sciences decided to open a Computational Centre. In 1962, this became the Cybernetics Centre of the Ukrainian Academy of Sciences. Still existing today, the Institute now has 500 employees, divided into 21 research areas and 3 labs, but when the Soviet Union collapsed it employed 6,500 people including professors, researchers, and lab technicians.

However, the history of computer science in the USSR and specifically in Ukraine actually begins even earlier: in 1950 at the Institute of Electrotechnology in Kiev, mathematician Sergej Lebedev had already completed his work on the MESM (Malaja Elektronno-Sčëtnaja Mašina, Small electronic computing machine), the first real computer to appear in the Soviet Union (and, according to some, the first in Europe – a title still contended with Swedish BARK and, even earlier, German Zuse Z4). It was about two metres high and eight long, with a capacity of 3,000 operations per minute – a first milestone along a path that would potentially take far. Later, in 1959, work was completed around the large computer "Kiev" which, among other things, was also used as a remote control and command function to reception bases in Kamensk and Slovjansk. In 1961, instead, "Dnipro" was born, then also used to project the coupling between the Sojuz and Apollo spacecrafts. At the end of the 1960s, 30% of the computers in the USSR were the result of the work of the Kiev Institute of Cybernetics.

Meanwhile, in 1956, a very young algebra PhD from Rostov had been invited to work in Kiev after defending a thesis on nilpotent groups the year before. Viktor Gluškov, 33, immediately stood out for his competence, initiative, and somehow visionary nature. Thanks to him, an actual faculty of Cybernetics was born in Kiev, and in 1965 and 1972 the first two specialised journals were launched. In 1973, Gluškov edited the world's first Encyclopedia of cybernetics in two volumes, first published in Ukrainian and translated into Russian the following year. 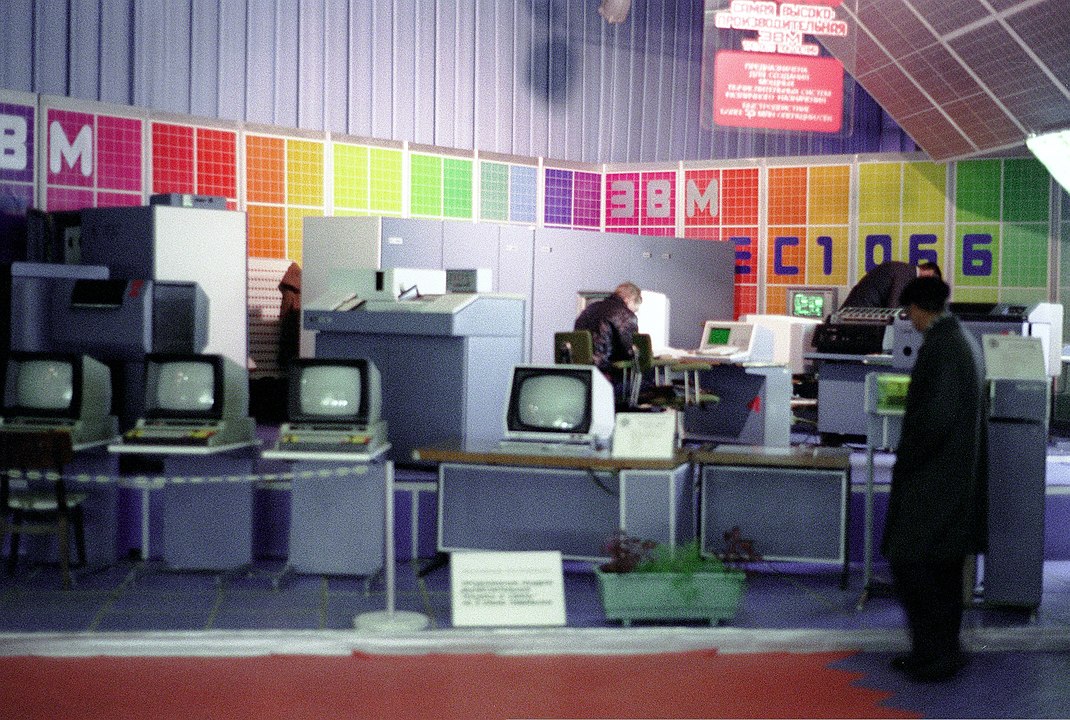 For Gluškov, the creation of a Soviet nationwide automated system – a plan he publicly proposed in 1963 – was a lifelong dream. Not only would it make the USSR the world's most advanced administration and economy (Gluškov also envisioned the end of cash through this computer system, an idea never digested by the party), but it would also achieve the "happiness of humankind". In a reality like the Soviet one, characterised by typed bureaucracy and essential stamps, computerisation would really have lightened the burden of the administrative machine, including for the individual citizen.

Gluškov therefore imagined a network of interconnected local computers, with a central computational centre in Moscow, which would guarantee transparency, precision, objectivity, and efficiency to the rusty Soviet machine. A few months after his death, in 1982, his fundamental volume came out with the utopian title Osnovy  bezbumažnoj informatiki , Fundamentals of paperless computing (bez bumagi).

Gluškov imagined a future, not too distant, when the computer would replace printed paper and even television, and regulate electronic devices (from washing machines to telephones) and even the flight of planes. Jokingly, his team of computer scientists speculated about a fantasy Cybertonia (Kibertonija ), a Soviet state of the future that remained a dream.

A cyber Soviet state aborted from above

In October 1964, Leonid Brežnev came to power replacing Chruščëv: Gluškov's ideas sounded sinister to the new political team, as they would upset the established balance of power (both administrative and economic), based on widespread clientelism and corruption at all levels. The central government therefore took cybernetics off its agenda, opting instead for a status quo that killed Gluškov's visionary dreams.

All that is left is trying to imagine what could have been: how would a cybernetic Soviet state have positioned itself internationally? Would technology undermine the party's regency? Would it postpone or accelerate the collapse? Iranian artist Bahar Noorizadeh asked herself these equally visionary questions in her recent video project After Scarcity  (2018).