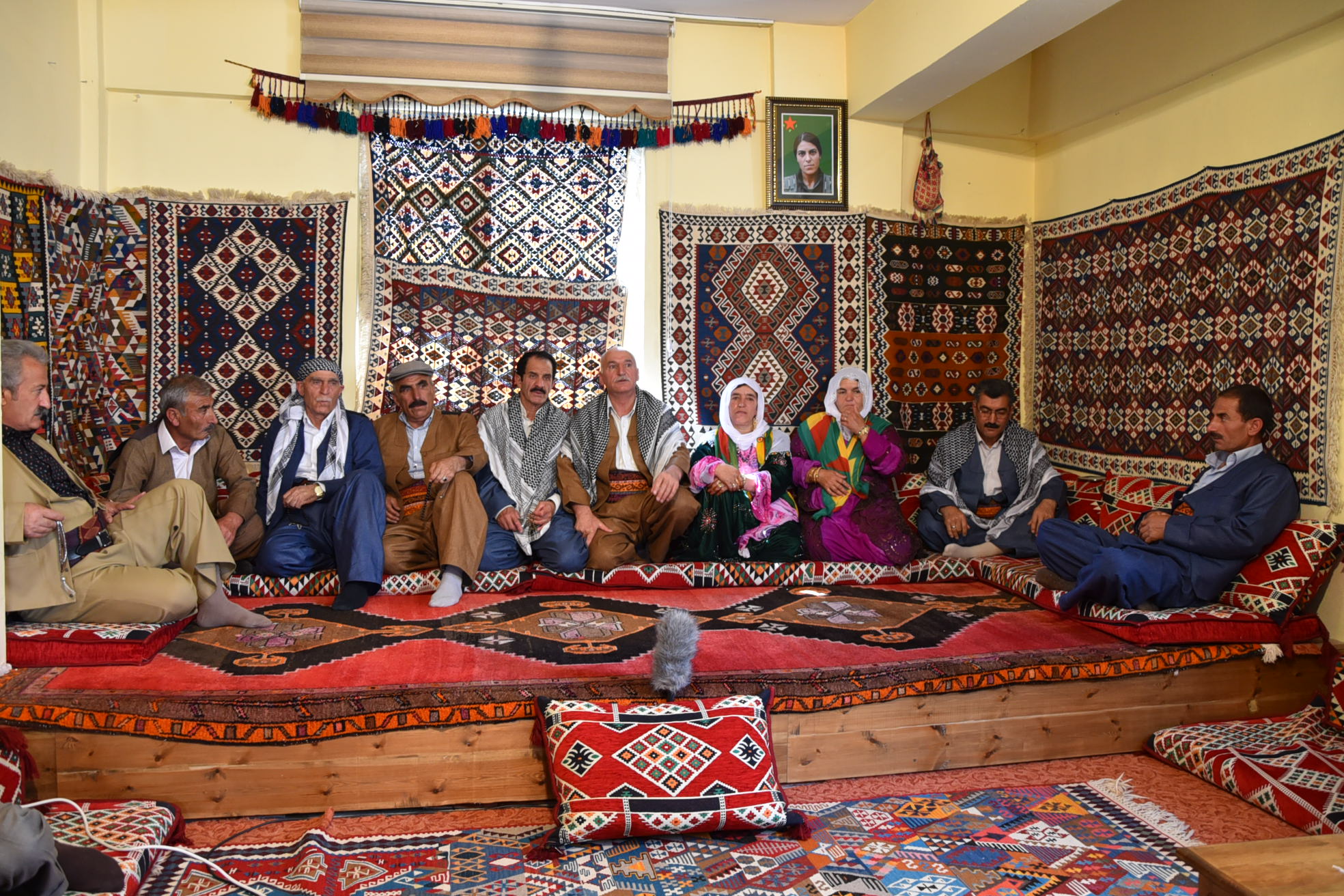 In the Dengbêj House of Van (photo D. Bettoni)

The Dengbêj represent the collective memory of the Kurdish people, having resisted the Turkish government attempts to assimilate them

A tradition that goes back many centuries, words that reverberate against the mountain walls and flow along the broad valleys of Mesopotamia: it’s the voice of the Dengbêj (Deng = voice, Bej = that tells), storytellers who preserve history, the legends and the collective memory of the Kurdish people since ancient times.

With epic compositions which can last several hours, with the sole support of one’s voice, these choral masters preserve within their exceptional memory stories of battles, heroes, impossible loves, but even of the difficult relations between the Kurds and the Turkish State, armed struggle, up to the recent chronicles on the Syrian war.

The art of the Dengbêj

The art of the Dengbêj consists in long sung narratives, unaccompanied by musical instruments. Typically originating from the sheep-farming tradition, they wandered among the villages and exhibited for people on the occasion of public events. At weddings they were sought after by newlyweds to entertain their guests. Representatives of an oral tradition, the Dengbêj had no references to remember dozens and dozens of stories of the repertoire and had to rely exclusively on their phenomenal memory. Every Dengbêj master chose one or more young disciples who were considered worthy of the art, and during the apprenticeship, which lasted many years, transmitted his/her own knowledge to them. This is the way in which, generation after generation, an endless historical heritage was preserved, withstanding the absence of books and archives.

Since the founding of the Republic of Turkey, the Kurdish language has been contrasted, pursuant to the assimilation project, whose purpose was to transform the Kurds into “Turks of the Mountains”: some letters of the alphabet were banished, names of places were changed, family names mutated, the Kurdish language prohibited in public and, obviously, so was the singing.

For many decades, the Dengbêj had to be silenced, some practicing in complete secrecy, far from earshot. This silence interrupted a tradition-transmitting chain, resulting in untold damage to collective memory, a damage which is to this day still greatly unexplored.

In the Dengbêj House of Diyarbakir

Back to the surface

Beginning in the ‘90s, a slow thawing of the relations between the Turkish government and the Kurdish community allowed the Kurdish language to become legal again: street directions and signs reappeared, radio and television began transmitting in the language, and in schools (yet, only private ones) Kurdish began to be taught again. For the Kurdish tellers, this represented a liberating moment and the beginning of a new life, especially in various cities with “Houses of Dengbêj”, cultural institutes supported by local administrations and other organizations. In these places, which often initiated recording and archiving activities of their musical heritage, the Dengbêj have come back to give public performances, rediscovering their place in society.

One of these Houses can be found in Van, easternmost city of the country, and was founded by Apo Yusiv, who without a doubt enjoys the most prestige among the Dengbêj in the area.

“Kurds don’t have a written historical tradition, the Dengbêj are our history books. As a people, we often went through difficult times, during which the rulers of each period – Persians, Ottomans, Turks – tried to convince us to forget who we are. But a people without a culture ceases to exist and if we are here today it is thanks to the Dengbêj, who remember our story and our identity. My mission, and that of Dengbêj like me, is to deliver to the future generations what we collected from our ancestors.”

One of today’s problems is the lack of successors. The new generations struggle to come towards the Dengbêj tradition. Yusiv explains his point of view: “The Kurdish culture was preserved by paying a very high price, continuing this also means realizing the hardships and the suffering that such a struggle entails. The new generations often don’t seem willing to take on this role, but it’s definitely not just their fault. Young people haven’t been able to listen to us for many years, they are attracted towards art forms that require less involvement. Cultural assimilation, reinforced under each period of dominance, aspires to detach people from their own roots, from its own culture, up to a point in which it is rejected or deprived of any value, so one gives up fighting for it, stops being able to stand the suffering that it involves. Now we hope that, with the renewed permission to perform in public, young people rediscover the necessary passion to carry the load on their shoulders, an honour that demands great sacrifices. And perhaps, if a Dengbêj earned as much as a modern musician, we would be full of apprentices.”

But what being a Dengbêj really means we can find out from the words of Mehmed Deriki, who goes to the House of the Dengbêj in Diyarbakir, another city in the southeast of Turkey: “I started when I was 15 years old and for a long time I did nothing but listen and learn from my master. Learning the story, the lyrics and the improvisational technique, the Dengbêj’s art, requires a lot of work to memorize and to perfect. In my best years I knew more than 120 songs, now, with age, I’ve forgotten a lot. To be a Dengbêj is both a gift from God, from which we receive the essential characteristics of voice and memory, as well as a strict devotion on our part, a type of effort that unfortunately discourages many young people.”

Back in Van, a storyteller who is considered particularly learned is Dengbêj Bedir, who has a long family history tied to the Dengbêj tradition. “The tradition changes because men change. We write new songs, for example, like ones dealing with the siege of Kobanî in Syria. Nothing is immune to the passing of time and so also our songs, the words, the pitch, the intensity, all go through changes by passing from one Dengbêj to another. In this sense, each performance is unique and unmatched and the artist becomes as one with his/her work of art. But the final objective is knowledge transmission and this is obtained only through practice, perfecting it until the Art in time and in space is fixed, because change is necessary and inevitable, but changing too much means losing one’s way.”

Thus, two contrasting forces: change dictated by History and man’s conservational efforts. Not an easy problem even for those who, today, try to save this heritage by means of modern techniques such as digital recordings, which allow for its preservation, but that also misinterpret its improvisational nature, typical of oral dissemination, with its perpetuation by way of master to pupil.

That of the Dengbêj is not an exclusively masculine role and even women have collected this millennial tradition into their own hands: a fundamental passage in the path towards the emancipation of Kurdish women.

“We can state that each and every woman, in Kurdistan, is a Dengbêj”, exhorts Apo Yusiv. “Certainly the existence of Dengbêj women contributes in improving the quality of the historical narrative, which is traditionally masculine.

The Dengbêj art collects its own compositional material not only from historically grand events, but also from daily life, which women have often been witnesses to without a voice: the patriarchal and chauvinist culture, in this context, relegated them to a silent and secondary role.”

Today a lot has changed, thanks to the feminist movement, thanks to some pioneers like Mariem Xan or Ayse San who knew how to find courage to be a role model, thanks also to Öcalan and his theoretical contribution to the Kurdish movement, in which women play a primary role.

But it’s the words of Dengbêj Werdek to bring us nearer to the most intimate connection between this ancient art and women. “In villages, the mothers preserved the collective memory of the people. In times of war, and for the Kurds this means a very long time, men went to fight and die, while the women stayed at home, to take care of the family, the crops, and to suffer. Silently, because being expressive in public, including singing, was considered unseemly.”

And she carries on: “The life of a woman has always been difficult. You don’t choose your lifelong companion: the first time that you will meet a man will be because your father has chosen a husband for you. You will live with him, you will sleep next to him, you will take care of his house and his farming fields, you will prepare his meals, but you will eat last, and less. At a certain moment the silence doesn’t allow you to take it anymore, you have to say it, you must sing out all your suffering and hardships. You do it when the children are asleep and the husband is far. You do it at night, to the stars, secretly. Or you sing to the children, when they are little and your voice rocks them to sleep. I think that our children first learned from us, and then became Dengbêj.”

Although it is slowly coming back to the surface, the Dengbêj tradition still meets strong resistance today. “When I was young and started learning, the only way to listen to Dengbêj was by listening to Radio Yerevan, that transmitted from Armenia”, says Mehmet Guli, Dengbêj in Diyarbakir. “Today we have a few radios that transmit our songs, once they even called me on the telephone to sing live. However, even if here in the House of Dengbêj we feel free to sing what we want, the radio may not always play some of the listeners’ requests, in order to not deal with problems of censorship and with the authorities.”

Apo Yusiv seems to get upset particularly when he mentions the problem of the relations with the modern music industry.

“There are organizations that have completely drawn away from our tradition, asking us to record for them. Now they monopolize public events, they refuse to support us Dengbêj. They offer to pay us, but it’s not with money that this art will survive. It needs visibility, to get the public closer to it and fall in love with it again. Festivals, which we can consider the modern form of shows inside villages, reunite the people and get them back in touch with a tradition that, after being forbidden for years, they were never able to know and explore. Only this way one will be able to develop a passion for it, learn it and transmit its legacy to future generations.”