Serbia: media in the storm 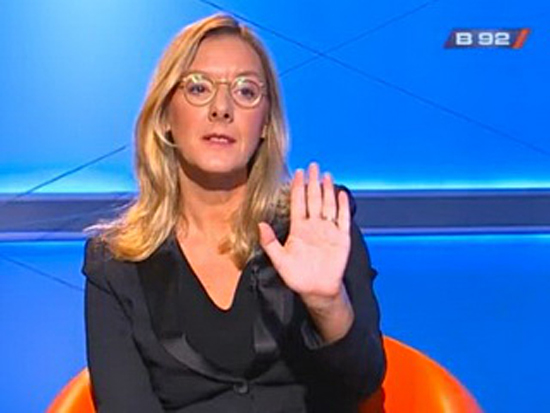 The abolition of "Utisak Nedelje", a popular political talk show broadcast on B92 TV and directed by Olja Bećković, caused a true storm among Serbian journalists. But this is not the only programme gone missing from the schedules

The cancelling of "Utisak nedelje" (Impressions of the week), Serbia's most popular political broadcast, from the schedule of B92 TV has caused a real storm in the country's media scene. Olja Bećković, author of the broadcast aired for nearly two decades, has publicly stated that she believes this happened at the behest of Prime Minister Aleksandar Vučić, while sources close to the government and B92 itself argue that it was a change in editorial policy and that Bećković was offered a slot on another channel of the same television, which will have a political and informational focus.

From a purely formal point of view, B92 TV did not violate the law because it is the right of owners and editors to decide the schedule (the possible breach of the contract signed by the author or the "Mreža" production house with B92 can be expected to be addressed in court). It is true, however, that Serbia remained without a widely popular TV broadcast, which used to voice different opinions and open criticism of the government, the Prime Minister, and party or state officials.

The information channel where B92 wants to transfer "Utisak nedelje" has low ratings. In addition, according to the contract, the programme is supposed to stay on the same channel – on which, however, B92 wants to broadcast mostly entertainment from now on.

Someone, then, was in a hurry to remove the country's most-watched political broadcast from the channel on which it aired for years. Knowing that the programme makes good profits and that non-compliance with the contract may create a problem, it is hard to believe that this was just commercial interest on the part of the owner of B92.

In Serbia, where the rule of law is at its lowest, any company's performance can be questioned when it collides with the interests of the government. For this reason, in journalistic circles it is believed that what happened must be in the interest of the owner of B92, but that such interest lies in not annoying power.

Journalists' associations have strongly criticized the suppression of "Utisak nedelje" and already started to collect signatures for a petition to bring it back.

Last week at 9 pm, the time slot in which the programme aired, the Association of Independent Journalists of Serbia (NUNS) organized a silent protest outside the building of B92. Seven days later, on October 6th, a similar protest was held in front of the building of Belgrade TV "Studio B", a channel that recently removed three programmes that apparently voiced unorthodox viewpoints.

The changes at "Studio B" were initiated by local parties, i.e. the owners of the channel. The programmes that were removed were replaced by broadcasts that mostly illustrate the successes of Belgrade's administration. There have been controversies in particular about the program "Problem", because author Predrag Sarapa publicly protested against the shut-down. The other authors, on the other hand, did not make themselves heard. Studio B has a long tradition and a relatively wide audience. It covers a much wider area than Belgrade alone, which means it can be seen by millions of viewers.

In the actions that have followed the suppression of the political broadcasts, the Association of Independent Journalists of Serbia insists on the fact that the tendency to suffocate pluralism is a very dangerous practice for the freedom of speech, and therefore also for the development of democracy.

NUNS issued a statement to encourage fighting for freedom of the media and ask the government to act in accordance with its law and constitutional obligations and create the conditions for media pluralism rather than suppress it.

Journalists of NUNS also report that public debate is disappearing in Serbian society and that communications between the ruling elites and the public is increasingly limited to press conferences or official statements. They also stress that investigative journalism is increasingly rare, as rare are the "serious" questions asked during press conferences and interviews with government representatives. In short, the impression is that politicians and other power centres are increasingly setting the questions can be asked as well as the answers.

At this moment, neither the actions undertaken by the associations of journalists nor the support offered by a weak, disorganized opposition can radically change the current situation of the Serbian media. The government tolerates less and less any form of criticism, a trend which can only increase with the aggravating of the economic and social crisis. At the same time, Brussels and Washington are especially interested in political issues such as Kosovo and will continue to relate with Belgrade cautiously, at least until the goals are reached in this area.

The other problems affecting the safety and freedom of journalists in Serbia remain unsolved. The promises to shed light on the murders of journalists that took place during the nineties – which, according to the associations, were the work of the state, and namely of the regime of Slobodan Milošević – remain dead letter. So do the attacks on journalists occurred after the fall of Milošević, while the police and other authorities are not in a position to guarantee the journalists' safety.

According to data collected by NUNS, only in 2014 there have been as many as 18 attacks against journalists – in half cases physical aggression and in half verbal threats and attacks on property.

"This database is a kind of warning to society and the state that there is no rule of law and freedom as long as journalists are threatened...We also have problems with the judicial process, even in cases where the identity of the aggressor is very obvious. In Serbian courts it is common for attackers to received minimum sentences, which obviously encourages attacks", says president of NUNS Vukašin Obradović.