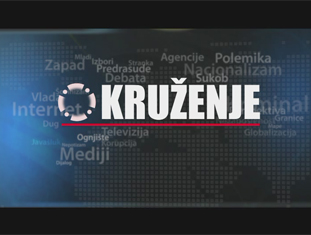 There are not many parts of the world where a TV talk show can be produced without requiring dubbing or subtitles in order to be broadcast in 5 different countries. But in the Balkans this is possible. Vicinities is a first when it comes to talk shows with a regional approach. "But don't talk to me about Yugosphere" says Nenad Šebek, the show's host

Okruženje, literally "neighbourhood", is the first talk show broadcast at the same time in five countries of ex-Yugoslavia, on eight TV channels. Five recordings on the screen from 2 April with four guests in the studio from different countries who will debate – according to the host, Nenad Šebek, "on prejudices that we harbour against each other, the economic crisis and how to tackle it, the media, the Great Powers and the Balkans, and being young in the Balkans". A satirical slant to the show will not be missing, as each episode will also host the comic actress from Zagreb, Marina Orsag. OBC met Nenad Šebek, who moderates the show together with Petar Lazić.

How did the idea of producing Okruženje come up?

The idea was born out of the fact that, despite South East Europe having split up there are still ties among the neighbouring countries. One of these is certainly language: we've transformed it into four different languages that all of us understand! The problems we face all have a regional dimension, thus the solutions cannot but be regional too: they cannot simply be found within the borders of each small state. This is where the idea of launching the first regional talk show dealing with problems afflicting the whole region comes from.

Why did you decide on a talk show? 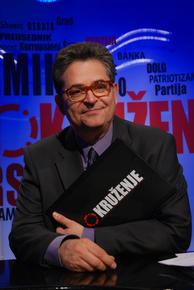 Executive Director of the CDRSEE. He was a BBC World Service journalist for 16 years covering the wars in ex -Yugoslavia and in Chechnya. Then he became their correspondent from the Balkans and Moscow. He has worked for radio Belgrade, for the press and TV, taught journalism at the American College of Thessaloniki. He has also been chairman of many conferences of the EU and editor for the web portal “Mondo“.

Because today on TV there are boring hosts with boring programmes. Okruženje has instead been thought up as an extremely dynamic production. The hosts' questions are no longer than 7-8 seconds, the guests' answers are just as short.

The programme lasts less than an hour and tackles questions that we believe to be crucial. The first was broadcast on Monday 2nd April and its topic was "prejudices". The next episodes will be on the "economic crisis" the "media", "Great Powers and the Balkans", and "youth in the Balkans".

How many viewers do you have?

It's still early to answer the question, the first recording has just been broadcast. Let's say that potentially our catchment area is the whole of the ex-Yugoslav area, obviously bearing in mind that we don't have the same appeal as a reality show... Our objective is to reach those people who are thirsty for this type of information, presented in an original and more modern way.

Who are the guests of the programmes?

In every recording there are guests from four countries. They don't belong to political parties but they have a certain prestige in the public opinion, where they are known for their opinions on the most delicate topics of regional current affairs.

Who funds the project?

Our main partner is the European Fund for the Balkans (EFB), a big organisation composed of four big European foundations: the Robert Bosch Stiftung, the King Badouin Foundation, the Compagnia di San Paolo and the Erste Stiftung. It is a civil society project, not a commercial production, thus the televisions that broadcast it receive it for free. The other partner is the Center for Democracy and Reconciliation in Southeast Europe (CDRSEE) .

We were talking about the common traits and that one of these is surely language. But did the use of a 'common language', not create problems in bringing together the ex republics of Yugoslavia? News about Croatia's recent request to subtitle Serbian films comes to mind… nothing came of it in the end…

Language is the smallest of the problems we've had. We were more concerned about the clichés of Yugonostalgia and Yugosphere coming up. This programme has nothing to do with Yugonostalgia or anything like that.

A language understandable to all is what is used. And all the participants in this project have taken in this dimension. Even in Croatia this has been well accepted and we broadcast on Kapital network, one of the main commercial TVs of the region. Obviously we are not on the main channels like the national radio and TV, despite having been in contact with them.

What has been a big surprise for me has been the Programme's broadcasting in Macedonia on the Alsat-M channel, a Macedonian TV station in Albanian language. They of course add subtitles and also broadcast the talk show for Kosovan and Albanian viewers.

This talk show does probably not contribute to Yugonostalgia, but indeed it does have something to say about Jugosphere meaning the relations between the ex Yugoslav republics...

Let's say we're making the most of a privileged position. As is the case for the economic sector where more is gained on a regional market.

What are your views on the reconciliation process in the region?

Unfortunately in the latter months we have seen displeasing situations. Violence in Macedonia, not to speak of Kosovo and all that is related to it. From my point of view the situation is not satisfactory. If we were to apply a comparative approach and look for instance at how Germany and France were doing 17 years after the end of the Second World War, we would see that they were already putting their effort into the creation of the European Union. Instead looking at where Bosnia Herzegovina is 17 years after the war, at the skirmishes taking place daily between Sarajevo and Banja Luka, how can we consider ourselves satisfied?

How much does European Union's support affect this issue?

In my opinion the European Union could try to use a heavier hand within the enlargement process. Personally I would see all the Western Balkans in the EU immediately. It would surely be a radical change of gear. But inclusion is better than exclusion.