40 km an hour. The slow modernization of the Serbian railways 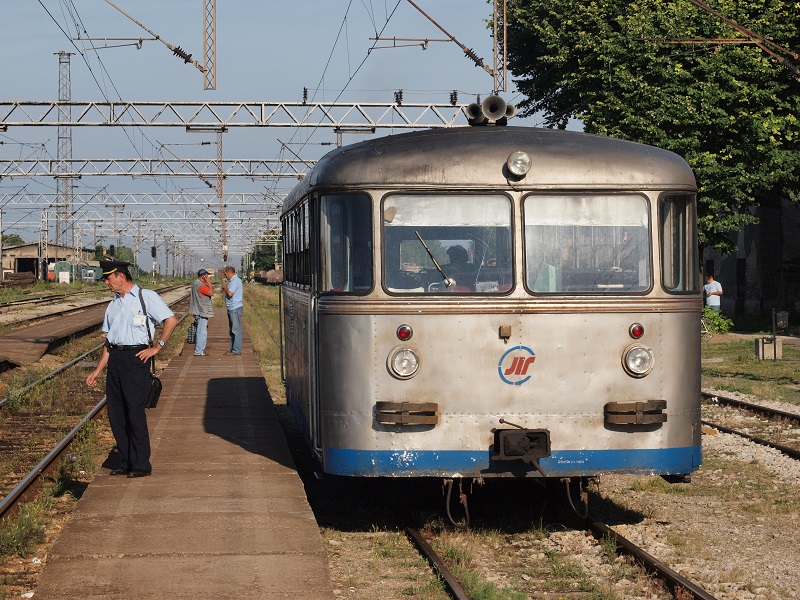 The glorious Yugoslav railway system is just a pale memory. Today travel by train in Serbia is uncomfortable, and even risky. Modernization, however, might be on the track

The Serbian Railway was founded in 1881, a few months before its founder, Prince Milan Obrenović, was crowned the first king of the Kingdom of Serbia. In 1884 the rail link between Belgrade and Niš was inaugurated. The first trains on that section travelled at an average speed of just under 40 km per hour. In Serbia today, more than a century later, the situation has not changed much. The average speed of passenger trains, by the most generous estimates, is around 44 km per hour.

From Belgrade to the Adriatic coast

Though aware of the slow pace of Serbian trains, the passengers on the international train leaving Belgrade for Bar in Montenegro on September 16 expected to reach their destination, 400 kilometres away, in the “normal” 11 hours. They certainly did not imagine it would take 32 hours, 3 times more. A series of mechanical breakdowns caused interminable halts in the Serbian countryside, then the last straw: the electric cables were hit by lightning, forcing the train to stop for 6 hours in a dark tunnel. Feeling obliged to respond in an exemplary fashion, the management not only reimbursed the passengers' tickets, but fired two employees and reduced the wages of seven others held responsible for the failures.

Despite the slow rate at which trains go, the Belgrade-Bar line is considered a masterpiece of modern railway engineering. Taking 20 years to build and costing 104 lives, this line has 254 tunnels, 435 bridges and the breath-taking viaduct of Mala Rijeka, the highest in Europe. Its opening in 1976 was a cause for pride in socialist Yugoslavia. On those tracks, connecting the Danube with the Adriatic Sea, trains arrived at their destination in 7 hours, even touching 120 km an hour. But over the last two decades the state of the line has noticeably deteriorated. In 2006 a train derailed in a canyon resulting in 47 deaths and about 200 people injured.

The condition of the Belgrade-Bar tract is a reflection of the general situation of the country's railways. As the present director, Dragoljub Simonović, unreservedly states, “today the Railways are in a state of extreme difficulty, both for their infrastructures and for safety.”

Only a third of the network is electrified, the rails are in a very poor state and some carriages are 60 years old. Over the last 5 years there have been about 100 derailments, thousands of departures cancelled and travelling time practically doubled.

However Simonović retains that the railway system is an important resource: “In 2013 alone the railway transported 6.4 million tons of goods and 4.7 million passengers, generating an income of 17.2 billion dinars (150 million euro)”. But the situation of the service remains critical. Branko Vučković wrote in Slobodna Evropa: “Trains that often derail even travelling at 40 km an hour because of bad maintenance, level crossings not adequately signed, delays of several hours and obsolete wagons, all give a picture of the dramatic situation which the Serbian railways have been experiencing for many years.”

As if this were not enough, the Serbian Railways have to cope with increasingly frequent thefts. The thieves take anything that can be sold on the scrap market: bits of carriages, copper cables, electric components, rails and sleepers. These thefts, apart from the economic damage they do to the Company, cause serious safety problems. On the Subotica-Sombor line this year a train derailed because someone had removed bolts by the hundred from the rails. In 2012, 400 metres of rails were removed from the Novi Sad - Orlovat line. In many other cases thefts have led to slowdowns and the temporary closure of some lines.

The present decline of the Serbian railways originated with the post-Yugoslav transition. The wars of the 90s and the economic sanctions imposed on the Milošević regime took the Company to the brink of bankruptcy. From 2000 on, although with some improvement, the railways have not been able to reestablish themselves as an efficient and profitable public concern, thanks also to scandals of corruption among the management.

For this reason in recent years the Serbian government has encouraged private investors, both local and international, in order to modernize the network and make it competitive. The possibility of total privatization resulting in liberalizing the market is obviously in discussion. But, unlike other countries in the area, like Hungary, Romania, Bulgaria and Greece, this has not yet been implemented, despite pressure from the World Bank and European Union in this direction.

Over recent years the Serbian government has asked for loans amounting to 1.5 billion euro for modernizing the track and buying new engines and rolling stock. The principal financiers are the European investment bank, the European bank for reconstruction and development and the Russian government. The European backers' priority is to renew the rail track corresponding to the Pan-European Corridor 10, which links Salzburg and Budapest with Thessaloniki. Further funds have also been given to improve Belgrade's suburban network, whereas Russia is investing in restructuring the once glorious Belgrade-Bar line. The agreement was signed at the beginning of the year and work should begin in 2015.

No trains to Sarajevo

One of the most painful aspects of the Serbian Railways' crisis is the deterioration of their international connections. While it was possible in socialist Yugoslavia, today travelling by train between Serbia and other countries nearby is neither practical nor easy. The most disheartening case is the interruption to the Belgrade – Sarajevo line which took place last year. Closed for the first time in 1990 on the eve of the war, the line was reopened in 2009, with great enthusiasm and expectations for its possible contribution towards the reconciliation of the two capitals. And in the last twelve months direct connections between Belgrade and other capitals in the region – Zagreb, Budapest, Bucharest and Sofia - have also been cancelled or greatly reduced.

Another illustrious absence is the Orient Express.This train, which has become a luxury tourist attraction, has not passed through Serbia for four years. The lesser known Balkan Express has taken its place, offering two hundred passengers every year the chance to relive memorable occasions of the past. Tito's renowned Blue Train has also, in its way, survived: once used by the Yugoslav President to entertain the most important heads of state of non-aligned countries, it too is now a tourist attraction.

In Vojvodina, however, there is a particular category of train tenaciously resisting extinction: the šinobus, literally “bus on rails”. Twenty years ago these rotund, diesel vehicles were common, carrying up to 20,000 passengers a day. Today there remain five which are used daily by about 400 people to get between Novi Sad, Zrenjanin, Pančevo and Kosanička Rača. Even if they are slow, infrequent and often rather unreliable, the šinobus are much loved, above all by those who have used them to cross the endless plains of the Pannonian Basin. How far the daily activities of the Vojvodina inhabitants, including small scale contraband, were related to the šinobus is recounted in this research. The šinobus is synonymous with reduced consumption, agility of movement and comfortable travel. Who knows, the redemption of the hapless Serbian railways might begin here.