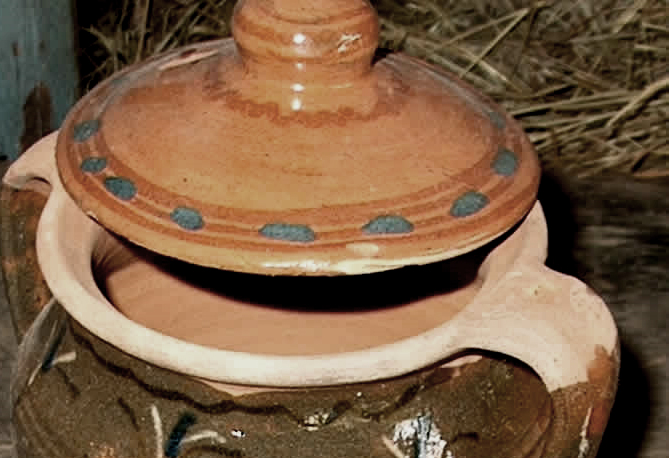 Some driven by the need to survive in the face of transition, others realising that consumer taste may change. Many economic activities in Macedonia and in the rest of the Balkans linked to the tradition of pottery

Dimce, from the city of Veles (central Macedonia), remembers the caravans which passed by his house carrying the clay for the pottery workshops in town. For eight generations his family had been making a living on earthenware. His father, however, did not want him to continue the family trade. He felt it was too hard. Yet, when Dimce lost his job in 'Porcelanka' (a large ceramic factory) more than a decade ago amidst the chaos of transition, he had little choice but to return to what he knew – pottery. He opened a ceramics workshop, specialized in pottery. It took him little to revive the old memories. “You need good clay, good hands, and an idea. Many have tried and failed”, he says.

Ceramic pottery has a long tradition in Veles. In the 1980s the town was reported to have had around 20 terracotta workshops. Ceramics was the main material for most dishes used in households. Then came the railway and with it came trade. Industrial products from all over flooded local markets. Fascinated by modernity, people turned their backs on traditional products and started buying new things. Earthenware was no longer interesting.

On the eve of the 20th century in Veles there was only a handful (3-4) of ceramic workshops. Their number increased during the of post-industrialization period, when people got used to and tired of the monotony of mass-produced kitchenware and started to feel a craving for the old again. As Dimce’s story tells us, a return to craftsmanship was in some cases also a forced decision due to the perils of transition.

Right now some things seem not to have changed: local artisan-ship is again reportedly threatened by inflows of foreign goods. This time, the culprits are cheap Chinese exports. Ceramic pottery is modestly priced, given the time and effort that goes into it, but it cannot compete with low-cost mass production. Yet, there is no doubt that tradition will stay alive.

West from Veles, in the village of Vranestica, people have lived off earthenware for as long they can remember. The area of Vrenestica is a major center of ceramic pottery in Macedonia. Around a third of the 200 families in the village are in the business. Here too, transition forced people back to their roots when the ceramics factory was closed. Endowed with huge supplies of clay, Vranestica is said to have already been a major pottery hub 5 centuries ago. A lot of the ceramics found on the markets in Macedonia are likely to have come from here.

The process of pottery making is not easy. The clay is dug out from at least several meters below the surface, it is drenched in water, then compressed by people's feet and ground by traditional machines. It is subsequently compressed again by foot, kneaded, and only then it is ready to be molded on the wheelhead (potter’s wheel). Once the item is shaped, it is room dried, and after that baked at high temperature.

Ceramics is one of the oldest technologies known to men. In the region it has been firmly rooted in local culture for centuries. This is probably why it is unlikely to wither even though it cannot ever have the economic significance it once had. “Water tastes fresher if I keep it in the 'bardak' (a large traditional ceramic jug) in the summer”, a local woman explains why she prefers the ceramics to a fridge.

The terracotta pot is inseparable from many local traditions. This affects the behavior of the modern customer too. Demand for some items increases ahead of some religious holidays involving the use of earthenware. In the area of Struga (a town in South-western Macedonia) there is still the custom that the new bride serves guests rakija (home-distilled brandy) from her so-called 'bardak' on the Monday after the wedding. In the autumn, ahead of the rakija-distilling season, the demand for the clay-made parts of distillation equipment also rises.

In search for the customer, however, some potters have moved away from traditional rustic designs and have come up with innovative marketing and products. Many of them are, however, still based on ancient models. Urns, amphorae, and other receptacles have come back in fashion, as well as replicas of famous artifacts from the many archeological sites in the region.

Tradition is also linked to art. The town of Resen has for years been hosting an artistic ceramic colony. For a decade the Resen colony has also been a member of UNESCO’s International Academy of Ceramics.

Further north, in Serbia, the village of Zlakusa near Užice, has celebrated the 15th anniversary of its ceramic colony this year. Zlakusa ceramics are famous for their excellent quality which comes from the unique combination of materials, clay and a stone called vrsta (a type of calcite mineral) used, as well as the specific production process. In mid August the colony celebrates the traditional baking of ceramics in an open fire. In fact, here, instead of the oven, potters use an open fire as was done in ancient times.

The Zlakusa colony combines tradition with modern trends in ceramic art forms, such as sculpting, the production of unique items, and the use of a variety of colours. The many international artists who regularly visit the colony take part of the local mastery away with them but they also bring in some of their own traditions and skills. The colony, in the words of its founder, Sofia Bunardzic, has contributed to the revival of pottery in the area. Going back a decade and a half, to when the colony first started, only a few elderly potters kept the flame going. Over the years the colony's numbers have rises significantly. The marketing of their products has also improved.

Recent understanding of the need for investments for the preservation of cultural traditions has helped ceramic pottery along with other traditional arts and crafts. Some local governments offer incentives for reviving it. The EU and other foreign donor policies have also pushed things in this direction. It is true also that post-modernity (and the return to traditions) has influenced consumer taste and revived the markets of hand-made goods. In some cases, a return to artisanship has been a livelihood strategy. People go back to old crafts and adapt them to new market demands. Other global factors, however, as the case of the railway a century ago, inevitably suppress local and small-scale production.

Ceramic pottery nevertheless, will survive, as it has done for centuries. It is simply too rooted in culture to disappear. The quintessential Macedonian dish, the 'tavce-gravce' (baked beans), is as a rule served in a ceramic pot. If it is served in anything else, it cannot be called by the same name, nor would it be perceived as such. It would not be the same thing. As long as Macedonians keep eating the 'tavce-gravce', and it is difficult to imagine they could ever give this tasty dish up, someone will simply have to keep on making the pots.