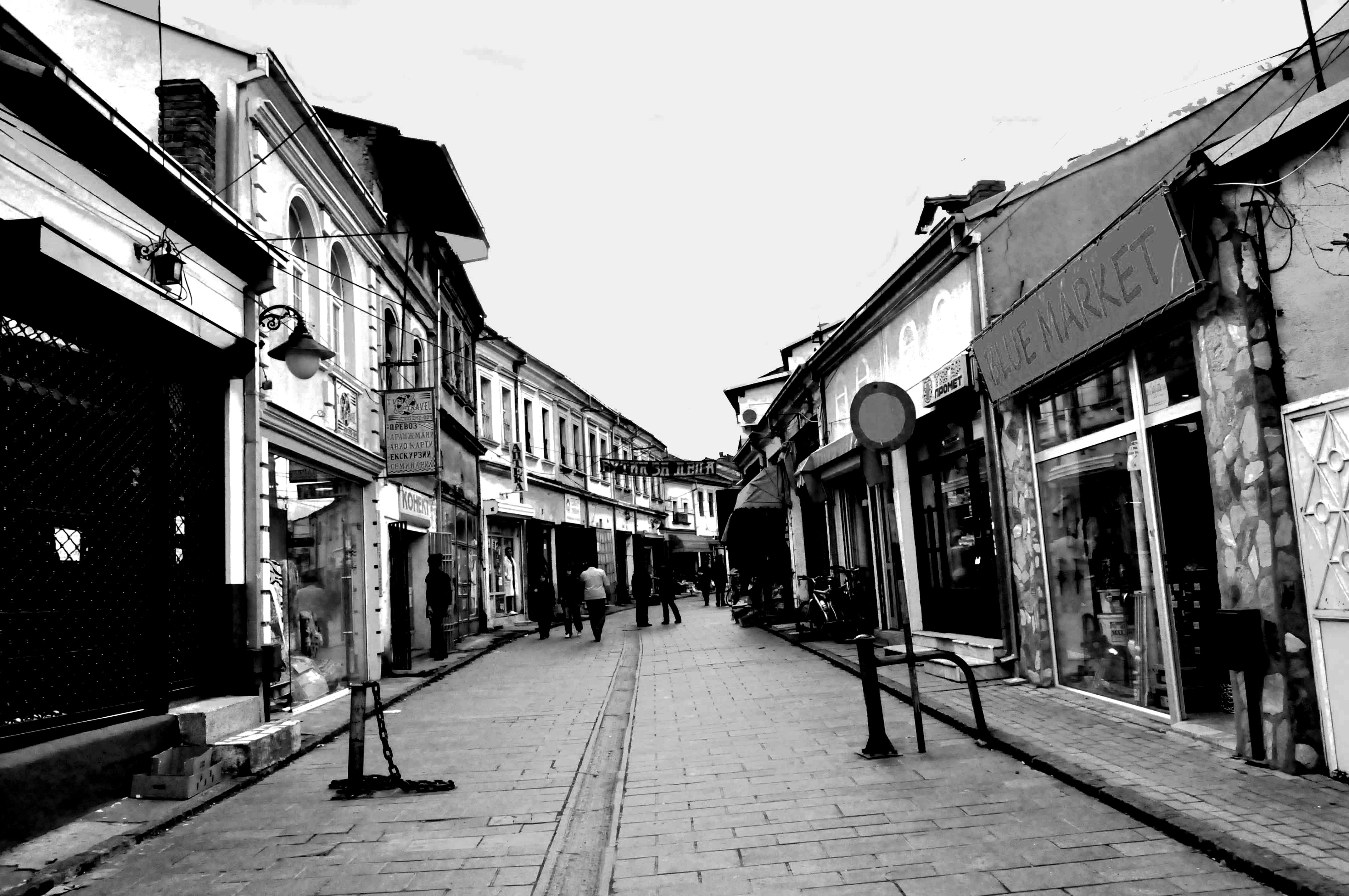 A perfect example of how to reconcile past and present. The Bitola čaršija has been neither abandoned nor a victim of unregulated building, nor even transformed into a shop window for tourists. Nevertheless it risks turning into a mundane modern market. A contribution to our dossier on Ottoman Bazaars in the Balkans

The Stara (old) Čaršija in Bitola typifies the latest phase in the present evolution of the čaršijas *. Many of these in the future will probably, like Bitola, become an actual market, well-preserved but more rooted in the present than in their Ottoman past. The çarshija in Bitola in fact is not just Ottoman. This town, situated on Macedonian terrain near the borders between Macedonia, Greece and Albania, is known as the town of the Consuls because during the Ottoman Empire it had around 20 consulates.

A crucial junction in terms of trading activities between the Adriatic and the Aegean and between Central Europe and the Ottoman Empire, this town in the Macedonian hinterland was the capital of the Rumeli Elayet, one of the Ottoman regions enclosing lands which today belong not only to Macedonia but also to Greece and Albania. So the town became a multicultural centre, although elitist. Its cosmopolitan nature is still present in its splendid churches and mosques, its neoclassical buildings that we don’t expect to find in this part of the world and its Stara Čaršija, the Ottoman market which has absorbed Western architectural influences from the late 19th and early 20th centuries.

Hundreds of shops line the streets. They sell everything from international high fashion clothing to plastic containers for agricultural use, from souvenirs to metal tools made by blacksmiths. The čaršija is very busy, its streets traversed by people going both to purchase goods and also drop into a café or restaurant offering local dishes. In the facades and alleyways recent renovation work can be seen which, remaining faithful to the cosmopolitan nature of the Stara Čaršija, combine Ottoman and Western elements in harmony, not forgetting the curious iron shutters which have amazed travellers since the time of the Ottoman Empire.

Even so the Stara Čaršija in Bitola is not a tourist attraction and not even traditional. The local authorities invest in its maintenance and are thinking of making it pedestrian, without however claiming to turn it into an exclusively tourist attraction. Tourists are in fact advised to go there to shop and have a look at the buildings which have Ottoman names. Even the bezisten, the covered area where the most precious products of the çarshijas were sold and stored, today has become a food market which, if it weren’t for its architectural style, would not suggest the place where the wealthier merchants of the town met and gave prestige to the čaršijas only a century ago.

Its people live it for how it is. No cultural project, no nostalgia for better times. The Bitola çarshija does not appear to be in conflict with the modern part of town as often happens in the Balkans. The passage from the čaršija to the modern zone consists of a long street which leads naturally into a beautiful park crossing the river Dragor as the çarshija gradually merges into a Mittel European type of town centre. A place which seems to live in peace with the past and its present.

Bitola’s cosmopolitan aspect has not however saved it from the usual Balkan disputes, triggered by a rigid application of the nation-state concept. Since the town is situated in the Pelagonian valley and has always had close ties with Greece the Greek nationalists consider the town part of their land, unfairly appropriated by the Macedonians.

It is equally important to the Albanians who consider it an integral part of ethnic Albania. For them Bitola has a particularly historic significance as in the 19th century the Albanian elite carried out its patriotic activity in this exact spot. Furthermore, in 1908, at a conference held in Bitola, it was decided to adopt the modern alphabet with Latin letters which is still in use in Albania. Today Albanians make up less than 5% of the town’s inhabitants.

The Vlachs are also involved in the argument, having contributed great names like the Manaki brothers, the first film makers in the Balkans. But the Vlachs, here as elsewhere in the Balkans, are an ethnic group strongly subject to a process of assimilation: they have always in fact been part of the economic elite in the Balkans, preferring to back an ethnic majority rather than self preservation within their own community.

Historical sources give contrasting data on the ethnic composition of the town in the past, partly because during the Ottoman Empire the population was subdivided on a religious basis into Turks, Greeks and Latins, and the various national groupings interpret this to their own advantage.

Now scarcely a trace of this multi-ethnicity remains in the Bitola čaršija, except for the odd Romani person whose dark skin colour gives the impression of some diversity. Otherwise the çarshija is a market in which vendors and customers rub shoulders at a modern pace.

The destiny of the Ottoman style čaršijas seems to be at a crossroads: whether to become an historic centre, fascinating to tourists, or to turn into a densely concentrated commercial area. The latter is a natural process, more probable particularly where the authorities lack strategies to promote tourism. Facilitated by being modern, Bitola is perhaps the best example of a çarshija in the form of a contemporary market.