Gjakova, story of an anniversary 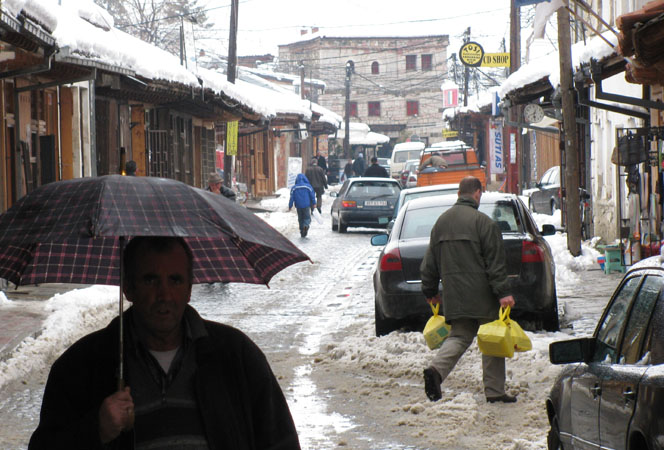 From the very beginning of the Nato campaign in March 1999, the city of Gjakova in western Kosovo became a city under siege and had to deal with reprisals by Serbian army and police. Its inhabitants remember those days

The first NATO bombs hit Gjakova on 24 March 1999: the day the Alliance launched its campaign against the Milošević's regime. NATO's actions were very much welcomed and considered as friendly fire by the locals. They considered the attack on Yugoslav military barracks to be part of the campaign to stop Belgrade's violence against Albanians.

The first retaliation did not take long. Serb forces burned down the whole neighborhood of Carshia e Madhe which lies at the heart of the town. Several neighbors trying in vain to quench the fire became the first victims of the NATO campaign, even though they were killed by Serb troops. This is a story about bombs, a siege, killings, prison, mystery, and lifetime recovery.

Gjakova is a town of 150,000 people which lies in western Kosovo near the Albanian border. It is mainly inhabited by ethnic Albanians and no Serbs - out of the few thousands that allegedly lived there before the war - have returned.

Among the different theories about the origins of its name, one suggesting that it derives from the Albanian word for 'blood' ("gjak"), seems to now reference the events of 1999. Authorities have registered that an estimated 6,500 houses were destroyed during the 1998-1999 war in this municipality. 1,870 of its citizens were killed. This number has been revised since the end of the war, while the number of missing has been declining accordingly. In June 1999, Gjakova had more than 600 men registered as missing.

Today, ten years since the date NATO launched its campaign, Nasibe Lluhani remembers her closest family and the drama which followed the troublesome war. She recounts the stories of her husband, son, and three brothers who were killed in May 1999. 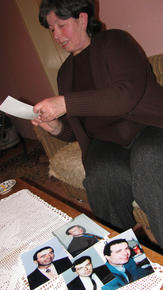 "Serb troops with police and military uniforms stormed our neighborhood on 7 May, killing and burning on their way to their usual 'offensive'," Nasibe says, remembering the day she saw her husband for the last time. Her house in the Carshia e Madhe lies just beside the hills which descend from the Albanian border and where the KLA (Kosovo Liberation Army) held fierce battles with Serb troops. Most of the Albanians were 'stuck' in the city during the whole NATO campaign until 12 June and their movement was strictly limited during this period. "My daughter and I were kicked out of the house while my husband, a cousin and a neighbor were executed inside," Nasibe explains through tears. Later, her house was burned.

A few days later, on the other side of the town, Nasibe's family suffered more casualties. She had sent word to her sons in an attempt to meet them and flee Gjakova together. Before they could leave their home, Nasibe's 20-year-old son and three brothers were separated from their families at gunpoint and shot. Nasibe was left wandering alone around the town's main road. She met what was left of her closest family years later when the Serb troops left Kosovo and its territory fell under the administration of international authorities and its borders and security was provided by NATO's Kosovo Force, or, KFOR.

On 10 May, 1999, several citizens witnessed a mass arrest of men aged 16 to 65. They were sent to different locations in the region and, finally, 155 of them were sent to Dubrava prison, Kosovo's main detention center. By the time the NATO bombing campaign ended in June, nine of them had been executed. The war was not over for the prisoners of the "Gjakova Group" who were sent to Nis, Serbia. Three of them were discharged while 143 people belonging to this group were sentenced to 1,632 years in prison on accusations of terrorism. Strong international pressure convinced the Serb authorities to overturn the decision and discharge all prisoners. The "Gjakova Group" was transferred to Kosovo on 25 April, 2001.

Joy and grief delayed
In the village of Meja, just outside Gjakova, about 400 bodies of men, women and children were found after the war. The news of discovering other mass graves across Kosovo and Serbia has continuously alerted the families who constantly wait for news for the missing members of their families.

Nasibe Lluhani's murdered family members were identified and returned home, although through long procedures. First, the authorities managed to identify the body of her eldest brother in 2000, then other members of her family in the following year. The remains of her husband and son were eventually returned in 2004. "I'm afraid this is all politics...it is the most difficult thing for a mother," said Nasibe, who said she thanked God that at least she found them.

Earlier this March, an association of mothers from Gjakova, Thirrjet e Nenave (Mothers' Cries), an organization working to resolve the fates of those missing, pledged to Kosovo authorities to identify the remains of about 400 bodies waiting to be identified in a Pristina morgue. About 2,000 Kosovars are still registered as missing from the 1999 war.

Also this month, international human rights organization Amnesty International (AI) appealed to Pristina and Belgrade to resolve the backlog of war crimes. AI claims that more than 3,000 ethnic Albanians were "disappeared" by Serbian police, paramilitary and military forces during the conflict. An estimated 800 Serbs, Roma and members of other minority groups were also abducted, reportedly by members of the Kosovo Liberation Army.

A treasure restored
Gjakova is at the top of Kosovo's list of cultural heritage. Its monuments include Roman stone bridges and Ottoman-type Carshija (market halls) which were the center of the towns' trade for centuries. The Carshija e Madhe neighborhood was destroyed rapidly on 24 March as revenge for NATO air strikes.

City Mayor Pal Lekaj claims that this was to be expected from the Milošević's regime. "As retaliation for NATO attacks, Serbs burned the heart of Gjakova and what was dear and precious to Albanians in addition to 500 kulla (typical Albanian stone houses) in the municipality," said Lekaj just days before the tenth anniversary of the NATO bombings. Lekaj himself fought in the ranks of KLA, admitting that on the day that NATO bombed the enemy, he was aware that Serbs would strike back in revenge.

The Institute for the Protection of Cultural Monuments in Gjakova has registered millions of euros worth of damages in the municipality. However, about 70% of damaged monuments have been restored through international and domestic donations and funds.

Two million euros have been dedicated to restoring about 400 destroyed properties in Carshija e Madhe, including several mosques and churches. "Money will never restore the treasure we had in this old part of the town," says Osman Gojani, head of the institute, adding that two religious libraries holding thousands of original books had been burned. He said the most beautiful houses in Kosovo had been destroyed. "We had 200-year-old homes with extraordinary exteriors and interiors which showed the lifestyle of Albanians from 18th century," Gojani explains.

A very careful restoration has been conducted on the Hadumi Mosque which dates back to the 16th century and has long been considered one of the most beautiful mosques utilized by Albanians in the Balkans. The Hadumi Mosque and the Carshija e Madhe have been restored according to UNESCO standards, which paves the way for Gjakova to become a world heritage site, according to Gojani. An application has been submitted.

A better future is definitely a concept Gjakova still looks forward to. The economic forecasts continue to look gloomy. As a former industrial town, Gjakova was once seen as Kosovo's engine of production and inhabited by a high level of experts and intellectuals. Today, all this sounds like a story too good to remember. Poverty has climbed to 20% from 7%, as recorded in the year 2000. Gjakova's citizens have put about 3,000 houses up for sale - with no buyers on the horizon - while 12,000 of its inhabitants are thought to have left the town after the war looking for a better life somewhere far away.

Remembering the ten-year anniversary of the NATO air strikes in Gjakova hurts the open wounds of a city still on the way to its revival.